The Holocaust Theme in The Story of Blima

Blima is working at her aunt Rachel’s Bakery. She is happy that she gets to work at her aunt’s bakery, because her aunt picked her to work their out of all of the sisters. She loves it at the bakery ,because the little children that walk in to buy baked goods for their parents and blima always talks to the children and ask them questions. Then, Its time for Blima to go home and she is wait for her sister her sister finally gets their and they are going to walk home together.

Don't use plagiarized sources. Get your custom essay on
“ The Holocaust Theme in The Story of Blima ”
Get custom paper
NEW! smart matching with writer

As they were walking Blima was frustrated ,because she thought her sister Adele was prettier than she was and that really disturbed her. Also, They talked about the nazis just picking up random people on the streets.

In this chapter Blima talks about her two month old baby brother Zalman. She says how her mother let her hold him and that she was uncomfortable holding him and he was squirming around and she dropped him.

Proficient in: The Holocaust

It didn’t take long for Zalman to die once his head hit the concrete at the bottom of the stairs. Noone even blamed Blima for it cause she was only a child. Then, they go to see their brother Victor and their Sister-in-Law. They stayed long enough that they could tuck in the neices.

They are cleaning and Blima says Mama im not pretty and was expecting her Mama to fling the dirty rag at her in a fit of temper.

Instead she sat down with her and tells her “See your eyes your eyes are as blue as the lake at the home of our cousins.” Mama then tells her that they looked alike, but that she was old. That cheered Blima up and they continued to clean.

As Blima was getting ready to leave she notices that her persian cat was at her grandpa’s feet, but her grandpa hated that cat so Blima knew that somthing was going to happen to her grandpa. Blima is getting ready to go to her Aunt’s Bakery, but as she was approaching she noticed a big group of people somone had broke into the bakery and put up yellow tape that had “JUDEN” printed on it. Well that was not gonna stop Blima from wanting to work so she goes in and tells her aunt she is ready to work her aunt says that she sould just go home.

Well, as she was going home she had a strange feeling that her grandpa had already past on. When she got home she was right her grandpa has past away and her mother was not taking it easy.

Well, Blima and her family were at the funeral and Blima had a fainting spell and fell straight into the grave. Well ofcourse everyone freaked out her mother ran to go get water and they were getting Blima out while she did when her mother had got back she was not cry or sad she was just trying to get Blima woke up and they finally did. Well then when they got back their neighbor had fixed a whole lot of food and abunch of Blima’s family had come. Her little brother was running around with his friend until Tata yelled at them “This is not a time of fun this is a time of moarning.”

It is the last time Blima will see her mother and she is returning from her Aunt Rachel’s Bakery. Blima got sent home early cause their is not that much buisness. She got sent home with some bread and has a coat on cause she didn’t realize that it was gonna be as hot as it was. As she was walking she hears bootlike footsteps and it is like somone is breathing down her neck. Then she is lifted up by her arms and legs. Blima then hears her mother cry out “BLIMA” and then the Gestapo put her in the wagon.

Blima is walking through the snow and it is so cold that she can no longer feel her hands. Blima is hungry so she is looking for somthing to eat when she sees some twigs and gets some for her and the girl linked to her. As they were walking she hears a shot ring out then a woman cried out and got slapped across the face by the butt of a rifle. They arrived to a waiting train.

While they were in the train Blima is approached by her schoolmate Clara and they talk about what has been going on and what they think is gonna happen Clara already knows and tells Blima “We will be alright as long as we work.” After a few hours they come to a stop and when they do about the same amount fill in the cart.

Blima is scared and doesn’t know what is gonna happen she says “I know where I am today but where tommarrow.” They left the train a few hour before and have been walking the whole time as they walk she keeps getting thoughts of what happened to her sisters or her mother and wonders whats gonna happen to her. They finally arrive and Blima is standing infront of a German woman Commandent she peels the coat of Blima as well as all of her jewerly and puts them into a growing pile of stuff. She is now pushed to another female guard that guard grabs her arm and tattoos a five digit number to it she is no longer Blima but is just a number.

She again is pushed along and her head is shaved and her clothes are changed for a black shirt and white pants that are two sizes bigger than she is. She was placed in small bunks that are filled with straw. As it was time to go to sleep Blima just lies there and after a little bit she hears clara say Blima you still awake Blima respondes with yes and they get to talking and Clara says that she is scared to sleep. Blima realized that she had several photos of her family as she tries to go to sleep she places them beneath the bindings across her chest.

Blima and the rest of the bunker get woke up at 4 a.m. and have to get ready to work. They hear a shrill whistle and everyone is up out of the bunkes and in a roll ready for roll call their is a woman commandent that comes in and as she walks by the girls she says a number and if it is your number you have to step out. After roll call they line up to walk to the place they will be working they approach a big building and all she the woman that runs the place her name is Frau Gizella and she is tall, taller than Blima. She walks down the roll and ask everyone if they know how to sew if Blima remembers what Clara said and says yes even though see has no clue how to sew she wishes she only paid more attention to her mother sew.

If you said yes you were guided into the factory if you said no you had to walk down this long tunnel. They were sewing and Frau has seen a girl that lied about sewing and then Blima starts to get scared Frau grabs the girl by her neck and drags her out into the tunnel. She then walks up to Blima and bends down and Blima thinks she is gonna grab her by the throat, but instead she asks her what her name is and Blima tells her the number she was given she then says no your real name and Blima tells her. Frau then straightens up her collar and moves on.

Blima has to do the same routine every day they get up, have roll call, and walk miles to the factory. They are at the factory and they are working Blima has finished 15 in the last hour and has 20 more to do if nothing is added to the pile. As she is working she starts to feel bad and gets sick to her stomach and the starts to puke Frau has her evil grin and then grabs Blima and takes her to the toilet while Blima is puking in the toliet Frau reachs into her deep pockets and Blima thinking she was going for her whip instead grabs a slice of bread and says eat this Blima eats it quickly and as it hits her stomach it makes her feel better she still has a little bit left.

After they are done working for the day they are in their bunkes and the woman comandent stands at the door with her dog and an apple and slowly peels and eats it to where all the girls would love to have it and are so hungry they would love to have it. She peels the skin off and then leaves as she does all the girls pile on it fighting over it. Lydia is still on the floor and is trying to get the piece between the cracks in the floor as the door opens the commandent lets the leash go and the dog attacks Lydia’s arm. Finally when the dog lets go Clara and a few other girls help her up and wraps her wound. Lydia is sent to another camp and it is all Clara’s fault cause she took the peel from Lydia.

The Holocaust Theme in The Story of Blima. (2016, Mar 13). Retrieved from https://studymoose.com/the-holocaust-theme-in-the-story-of-blima-essay 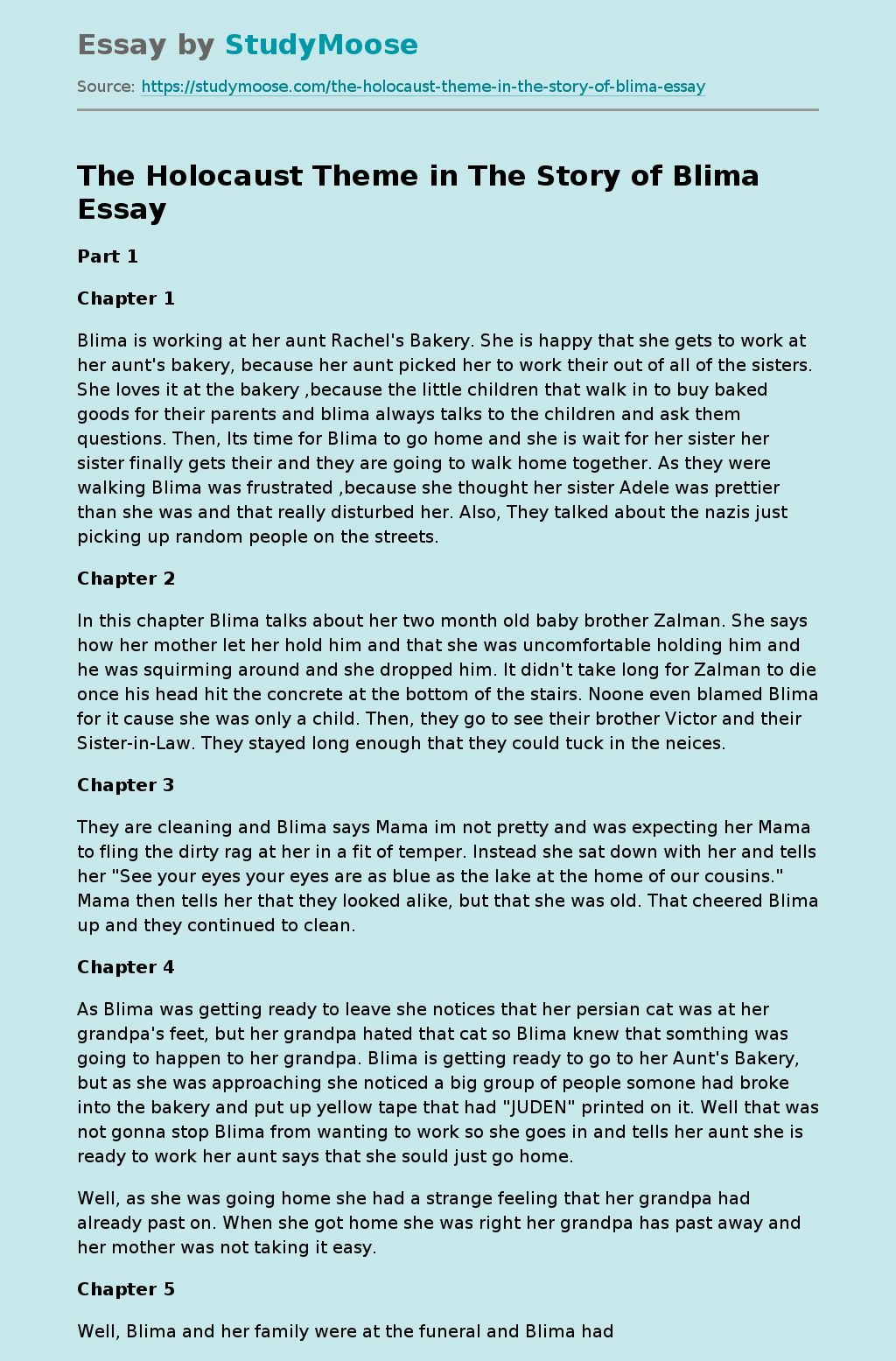