The novel “The Hobbit,” written by J. R. R Tolkien is about Bilbo Baggins, a normal Hobbit, who had never asked for an adventure until 13 dwarves and Gandalf The Wizard show up at his doorstep for tea. They want to use Bilbo as a thief for their quest to reclaim the treasure from the fearsome dragon, Smaug. Bilbo reluctantly joins the company of the dwarves as they set off on their journey to cross the Misty Mountains, which is troll and golbin country and the untamed wild of Mirkwood, where straying from the path can be deadly and lead you to Giant Spiders, Wargs and Orcs.

Don't use plagiarized sources.
Get Your Custom Essay on The Hobbit Just from $13,9/Page

An admirable character in the The Hobbit is Bilbo Baggins. At the start of the story he would much rather relax in his comfy hobbit-hole or take long walks in the Shire than go on adventures, as Mr Baggins thinks “adventures make one late for dinner. ” Bilbo reluctantly accepted the offer, and soon finds himself on a long journey through the forests of Mirkwood, to get to Smaug’s dark lair hidden away in the Lonely Mountain.

Thorin Oakensheild who is the leader of the group wasn’t that keen about having Bilbo on the quest but soon realises the goodness in him “There is more in you of good than you know child of the kindly West. Bilbo is quite unlike the dwarves as he cherished friendship and happiness over gold and wealth and he shows this by putting his life at risk several time by escaping ferocious goblins and killing giant spiders to save Thorin and the other dwarves. Throughout the story Bilbo’s maturity develops and he begins to gain a better sense of identity and confidence outside of the comfort of his hobbit hole. Tolkien has done this by contrasting Bilbo’s personal growth with the clear lack of development shown in the dwarves.

I think Bilbo is an admirable and remarkable companion as he shows wisdom, courage, bravery and above all nobility. Bilbo taught me a valuable lesson because of his goal to survive and be happy while the dwarves desire for treasure and jewels was their main concern. Greed is a recurring theme throughout the novel with many events stemming from the dwarves intense greed for food or gold. In our world today many people are equally as greedy as the 13 dwarves and would much rather be wealthy than have an enjoyable life full of wild adventures and long-lasting friendships.

Many the story themes and ideas related to the saying ‘money doesn’t buy happiness’ which in this case is quite true because even though Thorin was already extremely rich he still wanted more treasure and did not care that it would put his companions lives at great risk. The story demonstrates to me that you need to make the most of what you have got in life because nothing will last forever! An important event in the story was when Bilbo was accidently left behind inside the Goblin caves and tried to find a way out by himself.

In the tunnels Bilbo finds a ring, which he puts in his pocket. By an underground lake, Bilbo meets the creature Gollum. Gollum and Bilbo play a game of riddles. If Bilbo wins the game, Gollum will show him the way out but if Gollum wins, he will eat Bilbo. When Bilbo can not think of another riddle to ask Gollum, he finds the ring in his pocket and asks himself “What have I got in my pocket? ” Gollum thinks this is a riddle, but cannot answer it, and so Bilbo wins the game. Gollum gets angry and does not want to help Bilbo.

Gollum then goes away to get something, a magical ring, which turns the person wearing it invisible. Gollum cannot find his ring, and realises that Bilbo has it, “Curse the Baggins! Its gone! What has it got in its pocketses? He’s found it, yes he must have. My Birthday present. ” Gollum goes back, but Bilbo is afraid and runs away. While running Bilbo slips the ring onto his finger and he becomes invisible. Gollum ran past Bilbo, towards the way out of the cave. Bilbo realises that the ring makes him invisible.

With the help of the ring he followed Gollum and got out of the cave. Outside, Bilbo again meets Gandalf and the dwarves. It showed the relationship between the two characters and how neither Bilbo nor Gollum trusted each other but their relationship was based around language and riddles and who could out smart the other. I thought this was an important event because it demonstrated the great courage that the little Hobbit had and it made me feel that even in the scariest of situations you need to keep a positive attitude and don’t let anything distract you from your goals.

Tolkien portrays Bilbo as a modern thinker living in an ancient world. Bilbo is able to communicate and make connections with the past and present through language and traditions. For example, Gollum’s riddles are taken from historical sources whilst Bilbos come from modern children’s stories. It is the riddle game itself that allows Gollum and Bilbo to engage with each other rather than what the riddles are actually about. The unity between the old and the new world were ongoing theme throughout The Hobbit.

You may also be interested in the following: unexpected incident essay 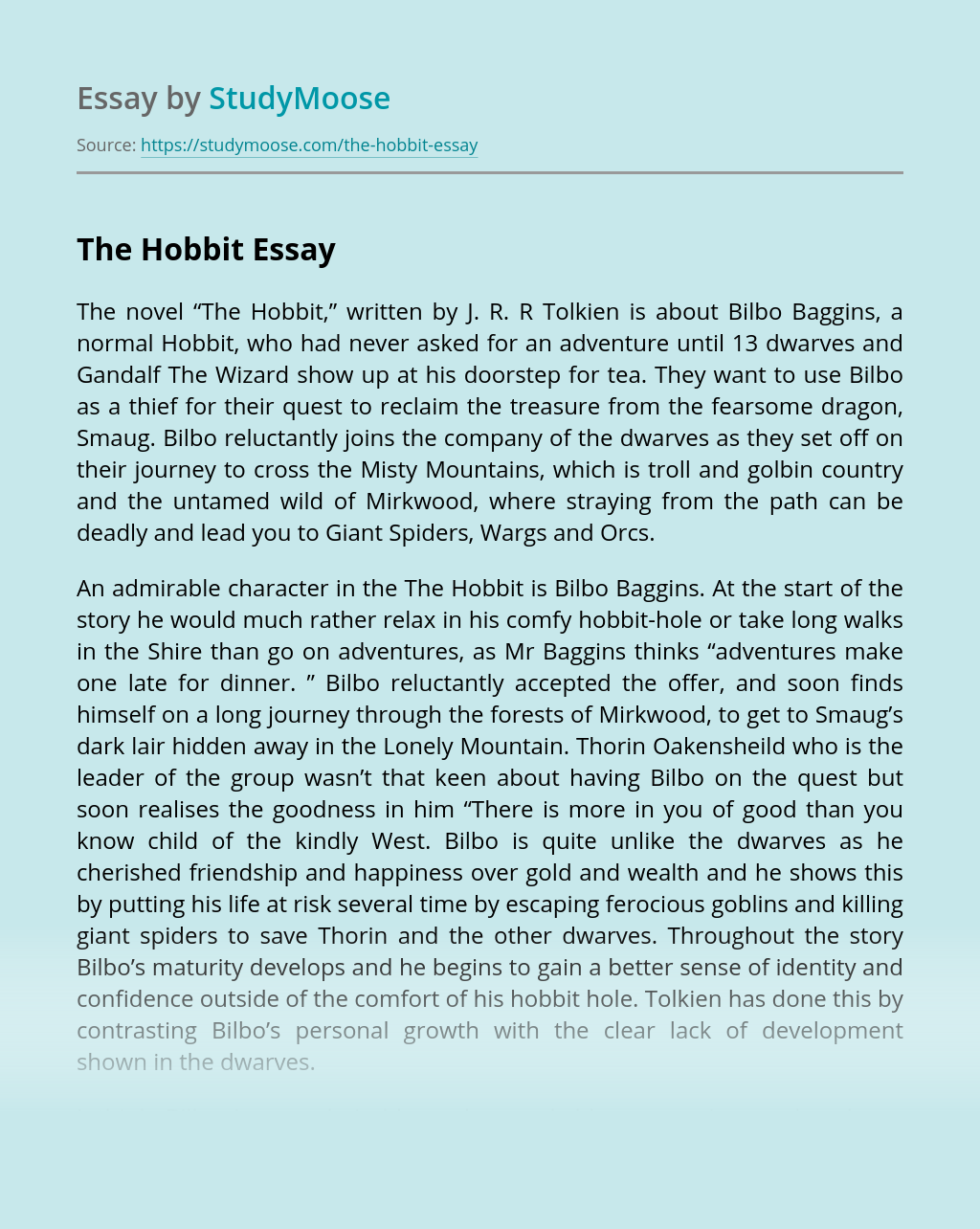 • Review the Leader Motives in Ch. 5 of Leadership: Enhancing the Lessons of Experience. How would you characterize Ho Ching’s motives? • Review Highlight 5.3 in Leadership: Enhancing the Lessons of Experience. What role, if any, do managerial differences based on gender play here? Format your paper consistent with APA guidelines We have described... VIEW ESSAY

This paper will critique a qualitative research study published in the Journal of Medical Ethics in 2004, By Dr Helen Aveyard, about how nurses manage patients who refuse nursing care procedures. Don't use plagiarized sources. Get Your Custom Essay on The Hobbit Just from $13,9/Page Get custom paper The article explains how nurses view informed consent... VIEW ESSAY

Teenagers are being defined as people between adultness and childhood.It is transfer period from childish to a matured one.This is the most difficult level in human as they will get confuse finding their own personality.Usually people at this level will get easily angry,getting depressed and has a lot of change in physical and emotion state.However,this... VIEW ESSAY

Benefits: -Mills liked the control that it allowed her – Slower growth rate would enable her to learn as she grew the business – Lower risk as everything was already financed by the sales profit and the business to date had no debt Implications: – Question of whether Mills would still be able to continue... VIEW ESSAY