The Hobbit Book and Movies Comparison

As readers, we like to watch movies based on the books. We, as readers, most likely, see all the differences between the books and the movies that Peter Jackson and the people at Warner Brothers changed in their films. So we all love movies that Warner Bros. Pump out every year, but here is what the Warner Bros changed Number 1 the wood elves actually serve a purpose, Number 2 The Arken stone is common knowledge, Number 3 they accidentally walk off the path so here it goes.

Don't use plagiarized sources. Get your custom essay on
“ The Hobbit Book and Movies Comparison ”
Get custom paper
NEW! smart matching with writer

As my first piece of what Warner Bros. Changed with the hobbit movie is that the wood elves actually serve a purpose. Supporting detail from documents with citation: Just to be clear the wood elves are the ones who are in Rivendel but in the book they just pass through the woods, they aren’t being chased by orcs and the elves just sing a happy little song and everything is all good and in the book rivendale dosn’t even exist in the books so in the book they don’t even serve a purpose but to introduce a new type of people.

But in the movie since they wanted to make, everything match with what the lord of the rings movies say they make it so that they look like cowards for running away into the shelter of their enemies. The book was way better than the movie.

The second thing is that the Arkenstone is common knowledge.Supporting detail from documents with citation: in the movie where a rose the Arkenstone as being common knowledge among their entire group but in the book Bilbo has no idea about the Arkenstone but he stumbled upon it when he is searching the cave after smog has left he finds it into your sights to take it as his one 14th of his treasure but he has no idea of its true value but then the movie stays true to the book where he escaped But in the book he has no idea if it’s true value so when he is giving it to the citizens of Dale and the hideouts they are wondering how he came up on it and was giving it he answered that he found it and is willing to give it up as his 14th of the treasure so then he can stop war from happening but in the movie it’s come now it’s right from the very beginning we know this is the Arkenstone we know it’s value so it makes Bilbo look like a traitor when he is giving it away the book is way better than the movie’s.

My 3rd reason why the books are better than the movies. In the books as they’re walking through the woods of the High Elves, they accidentally walked off the path.Supporting detail from documents with citation: In the book tasty the fire of some The High Elves who didn’t return to the gates by morning do see that the fire is off the path and they are not sure whether the fire is of a friend or Foe so they decide to just send Bilbo had to check out the fire, but to the warning given by Gandalf they cannot find the way backed it went completely pitch black around Bilbo and he can’t find his friends But he eventually finds them when the spiders attack his friends he rescue Them so that is why Books are better than movies.

As my conclusion, I would like to state that the books are way better than the movies in so many ways, but those were the three that I think that is the biggest ones that they missed at Warner Bros. This is my essay.

The Hobbit Book and Movies Comparison. (2021, Oct 08). Retrieved from https://studymoose.com/the-hobbit-book-and-movies-comparison-essay 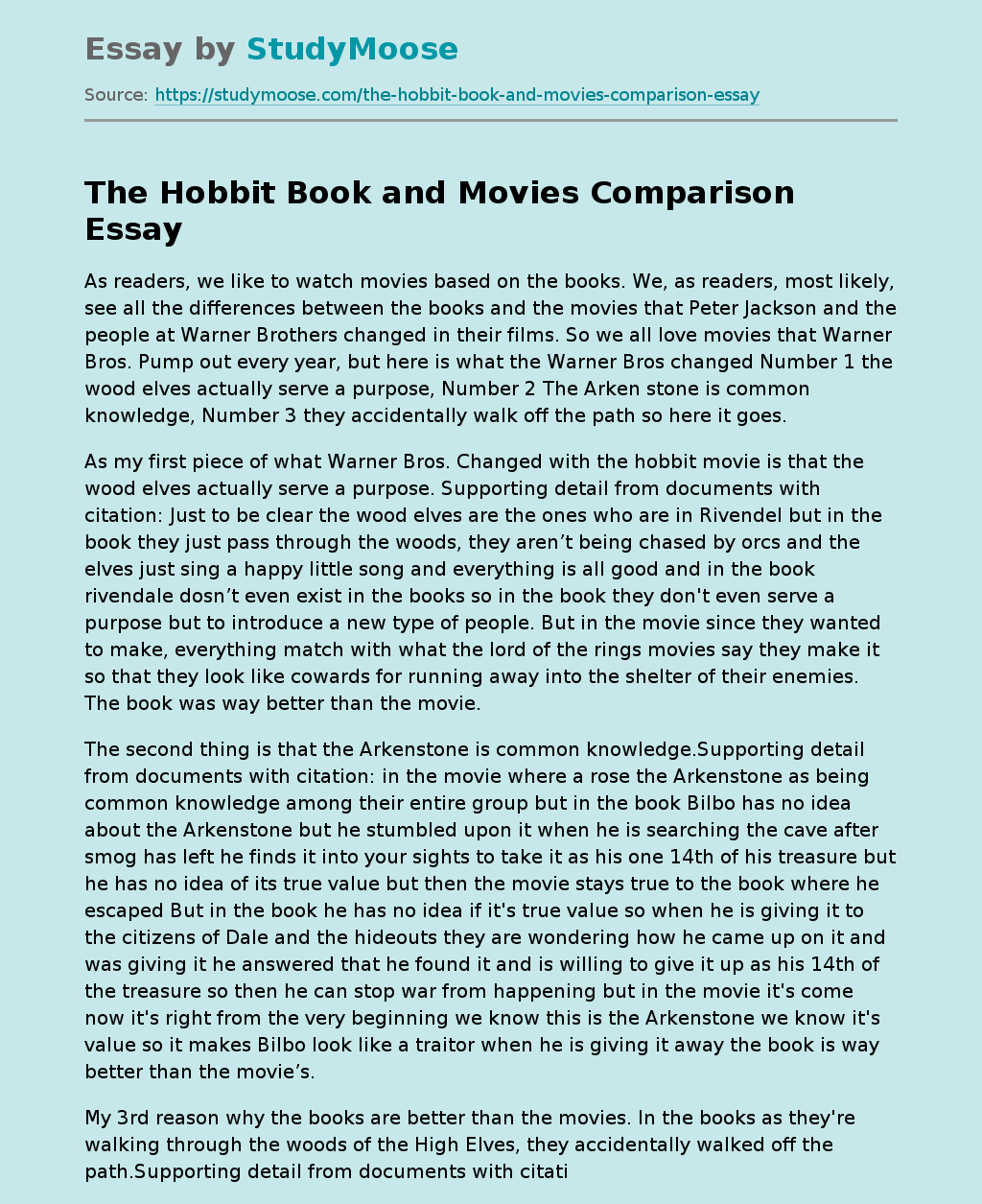