The Hobbit: An Unexpected Journey and the Hero’s Journey

The hero’s journey that Campbell said in The Hero with a Thousand Faces is a basic pattern and found in many narratives around the world. The standard pattern of the adventure of the hero is represented in the sequences: Departure-Initiation-Return. This sequences also known as the heroic Monomyth. In the movie, The hobbit: An Unexpected Journey, Campbell’s Monymyth is represented by the main character.

The story unfolds according to each step of Monomyth. ‘The call to adventure’ is the first stage of the hero’s journey.

Don't use plagiarized sources. Get your custom essay on
“ The Hobbit: An Unexpected Journey and the Hero’s Journey ”
Get custom paper
NEW! smart matching with writer

The hero begins from the trivial round of daily life to enter the new world by accepting the call from a strange world. The calling to the adventure is a destiny for the hero and the hero is irresistibly fascinated to an unknown zone according to his unconscious instinct. This new region represents both treasure and danger such as a distant land, a forest, a kingdom underground, beneath the waves, or above the sky, a secret island, lofty mountaintop, or profound dream state (Campbell 48).

In the movie, The Hobbit: An Unexpected Journey, Bilbo who is a younger and more reluctant Hobbit received the offer that is fighting the dragon ‘Smaug’ from Gandalf who is an itinerant wizard. Before the proposal, Gandalf tricks Bilbo into hosting a party for Hobbit warriors who are toward to the Lonely Mountain to fight the dragon. The movie shows typical ‘The call to adventure’. The movie starts with a peaceful normal life of an ordinary hobbit and extraordinary invite him to adventure as same as Harry Potter, Lord of the Rings and Matrix.

Bilbo’s journey is given to him by a guide who is wizard in the movie.

‘Refusal of the call’ is the second stage of the Monomyth. The hero often refuses to the call when they give it because they want to hold their current circumstances. Also, they felt a sense of obligation, fear, insecurity and a sense of inadequacy for the new world. Campbell said “Refusal of the summons converts the adventure into its negative. Walled in boredom, hard work, or ‘culture’ the subject loses the power of significant affirmative action and becomes a victim to be saved” (Campbell 49). In the movie, Bilbo refuses Gandalf’s offer because he is afraid of death. He considers himself to be an ordinary person so, he cannot join the journey with brave Hobbit warriors.

Also, he thinks he might die during the journey and he cannot afford the adventure by himself. So, he refuses the offer from Gandalf and tries to be satisfied with his ordinary life by himself by doing house work. However, Bilbo feels lonely and emptiness when the group of hobbit leave Bilbo’s house. So, Bilbo changes his mind and willingly joins the group of hobbits. The movie shows the process that an ordinary hobbit decides to join the adventure. At first, he refuses the call such as ordinary person. Finally, he changes his mind and the journey begins. When the hero in the journey, his guide and magical helper appears, this supernatural aid will present the hero’s talismans or artifacts that will help them later in their quest.

Campbell said “Having responded to his own call, and continuing to follow courageously, the hero finds all the forces of the unconscious at his side. Mother Nature herself supports the mighty task. And so far as the hero’s act coincides with that for which his society is ready, he seems to ride on the great rhythm of the historical process.” (Campbell 57). In the movie, Bilbo gets separated from the group in the goblins’ world during his journey. He encounters Gollum on his lost way. And Gollum suggest a game of riddles. During the game, Bilbo coincidentally get Gollum’s ring. With the help of the ring which confers invisibility, Bilbo escapes the goblins’ world and rejoins the group. ‘The crossing of the First Threshold’ is the stage where the hero actually overcomes the strange field of adventure.

This is the first important decision of independence and turning point between the ordinary world and the strange world. He leaves the safe realm and ventures into an unknown and risky world where he doesn’t know the rules and limits. Also, the heroes start to encounter the constant threat of death. The heroes quickly learn the new rules, endurance and strength. The inherent personifications of the hero aid him and guide his journey until he arrives to the ‘threshold guardian’ at the entrance of the darkness zone. Campbell said “With the personifications of his destiny to guide and aid him, the hero goes forward in his adventure until he comes to the ‘threshold guardian’ at the entrance to the zone of magnified power” (Campbell 64).

In the Hobbit, the group of hobbits travels into the wild. Bilbo encounters Trolls who are usually keen to eating the dwarfs when they prepare their dinner. Trolls try to kill them and Bilbo tries to escape from the Troll while they are looking away. However, the Trolls become aware of the escaping Hobbits and they capture them again. At that time, Gandalf saves the company from the Trolls and leads them to Rivendell, where Elrond reveals more secret from the map. Apotheosis is the glorification of a subject to divine level.

And this is the pattern of the divine state to which the human hero attains who has gone beyond the last terrors of ignorance. When hero comes to a realization about the purpose of life and himself, the hero’s view is changing with entirely different way compared to the first. According to the Campbell, “Those who know, not only that the Everlasting lies in them, but that what they, and all things, really are is the Everlasting, dwell in the groves of the wish fulfilling trees, drink the brew of immortality, and listen everywhere to the unheard music of eternal concord.”

(Campbell 147). In the movie, when the group of hobbit passed by the Stone Mountain, the mountain is collapsed because the mountain was a giant and they start to fight each other. Due to their fighting, Bilbo has a near-death experience but, Thorin who is the captain of the group saves Bilbo’s life. Afterwards, while they are sleeping in the cave, Bilbo finally realizes what kind of things could help their company. He had been concerned for an uncomfortable future before their journey had started. But after this incident happened, he started to think genuinely and changed his mind about what things could help their group.

In the Ultimate Boon stage, the hero reached the goal of the quest. Through numerous trials before the ultimate boon, the goal of the journey is achieved. The ultimate boon is the ultimate “treasure” won by the hero. He may become stronger, he may become a great leader, or he may become enlightened spiritually. The boon can only be received by the hero after all personal limitations are gone. This stage is the climax of the story and tension of the story is solved. According to Campbell, “The gods and goddesses then are to be understood as embodiments and custodians of the elixir of Imperishable Being but not themselves the Ultimate in its primary state.” (Campbell 155).

In the movie, when the group of hobbits attacks a bunch of Oak, Thorin fights the captain of Oak. However, Thorin loses to the captain of Oak and he tries to kill Thorin. At that time, Bilbo attacks the captain of Oak and save Thorin’s life. Also, a plethora of eagles who is friends with Gandalf help the group of hobbits. The eagles pushed the Oaks off a cliff and help the hobbits to escape to a safe place in East Mountain. Thorin, who always ignores Bilbo regrets his behavior and apologizes for the rudeness. Also, Thorin finally accepts Bilbo as real member of the Hobbit warrior group. In The Hobbit: An Unexpected Journey, each step of the hero’s journey and their own pattern in the movie mix with one another and create good stories.

Not only does the story specifically follow the pattern but also, they twist some elements in the movie. In the movie, Bilbo who is the main character represents an incompetent man and he looks like an ordinary character compared to the other characters that have strong strengths. He always was a burden to the group of hobbit warriors. At first, viewers cannot see the value of Bilbo because there are many heroes with strong power. However, the ordinary main character intervenes, solves their problem and harmonized their unique strengths+ through each step of the hero’s journey. Through the movie, people can understand Monomyth with great ease.

The Hobbit: An Unexpected Journey and the Hero’s Journey. (2016, May 18). Retrieved from https://studymoose.com/the-hobbit-an-unexpected-journey-and-the-heros-journey-essay 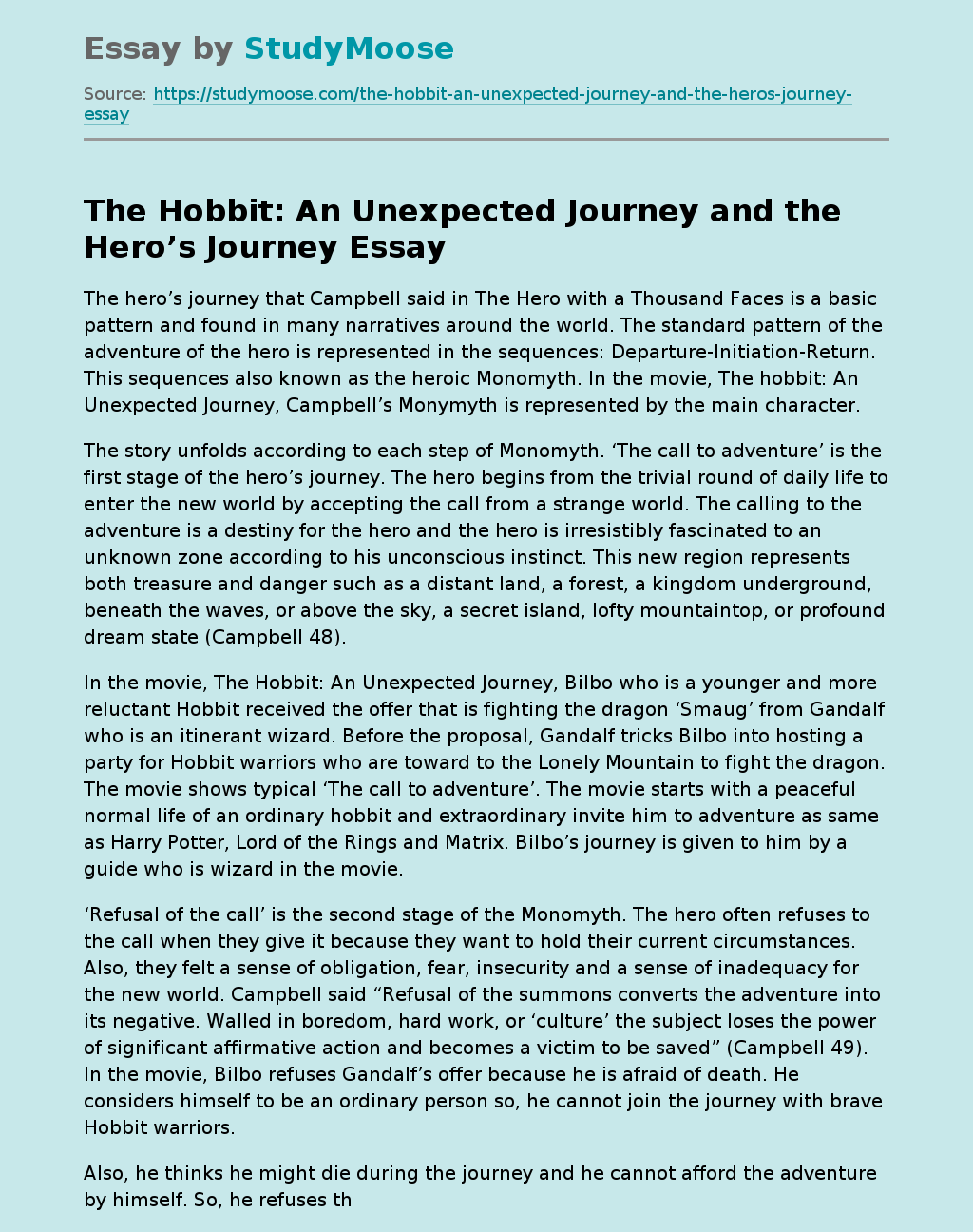