The History Of The High Heel

Despite their sensual looks, heels have a history that is violent. After all, stilettos take their name from the knife of medieval assassins. According to Edward Maeder, historian and founding director of the Bata Shoe Museum, heels were first worn by Persian horse riders. This technological innovation kept the riders secure in the stirrups.

Louis XIV, who ruled France from 1643 to 1715, was perhaps the first royal user of heels. His attractive red shoes soon became a major mark of nobility. Maeder explains why heels were used by men.

Don't use plagiarized sources. Get your custom essay on
“ The History Of The High Heel ”
Get custom paper
NEW! smart matching with writer

He says, “Men wore knee-breeches then, so you saw their calves. If your heel is higher than the ball of your foot, your calf muscles are going to expand. The larger the calf, the sexier one was considered.”

Once men’s legs were hidden by trousers at the beginning of the 19th century, their heels disappeared, too. The brightly colored clothing and accessories the men wore were soon dismissed as womanish, foppish, and effeminate.

European women were starting to assert their equality by adopting traditionally male styles of dress, including wearing heels, smoking a pipe, and cutting their hair in an effort to masculinize their outfits. With the coming of great male renunciation, men stopped wearing bright clothing that became associated with women and quit wearing heels altogether.

A century later and a half later, block heels or platform boots for men made a comeback in a big way, but stilettos were still reserved for women and men had to mostly stick to wedges and platforms.

Why you should go for heels

There are many reasons listed in favor of not wearing heels but here is our take on why someone should wear heels.

Let’s face it. No one, irrespective of gender, is ever truly comfortable in heels is the major reason against the use of heels. But we believe that if you think you look good and heels make you feel beautiful, your brain will automatically turn off the pain. So go ahead and admire yourself in that favorite heels today.

In the 16th century, men used heels to showcase their power and privilege. As time progressed, it was adopted by women and heels turned out to be a symbol of sexuality. We believe that beauty is not a matter of gender but it is a matter of style. Dressing up for oneself is important and what others think should never bother you. It’s time that men’s interest in heels is acknowledged.

Most women who wear heels say that it makes them feel powerful. Our customers who use heels have told us that they feel empowered when wearing heels. We would like you to try that for yourself. But at the end of the day, if you say that “I want to wear heels because I like to”, we feel that there is no better reason than that.

Size should not stop men with big feet from wearing heels. So VDrag is happy to announce that we now take orders and customize shoes for men of all feet sizes. Contact us at VDragheels@gmail.com

Trans equality is an issue that merits serious attention. Heels are a part of this gender-bending fashion, with women wearing them and men to have shown interest in heels. There is a lot of stigma surrounding femininity in men and trans individuals. However, VDrag aims to break this stigma and serve men who like heels. We invite you to try out our various options and our aim is to serve you the best.
“You’re born naked, and the rest is a drag.” – RuPaul

Have you, as a man, ever felt that men do not have a lot of options to choose from and that the fair sex has a lot of variety when it comes to dressing and accessories? Balaji, a 22-year-old architecture student, complains, “There is literally nothing for guys. Look at women. They have skirts, dresses, frocks, crop tops, heels, shoes, and can even wear men’s clothing but men only have a suit or shirts and pants to choose from. I am so bored with the usual options.”

There is no middle ground given to men in fashion; the idea of androgyny is still not discussed openly. VDrag believes that men should be able to dress up the way they like. Ashwin, a 23-year-old college student says, “I identify myself as a man. I am fascinated by my girlfriend’s heels and like to have one of my own. However, when I expressed my desire to my friends they asked me if I was gay or wanted to be a drag queen. I told them that I need not be any of that to like heels and I want to wear it because I like it.”

We believe that wearing heels is a style choice and does not have anything to do with gender. If you like wearing heels, get yourself a customized piece at our stores right away. What are you waiting for?

The History Of The High Heel. (2020, Nov 02). Retrieved from https://studymoose.com/the-history-of-the-high-heel-essay 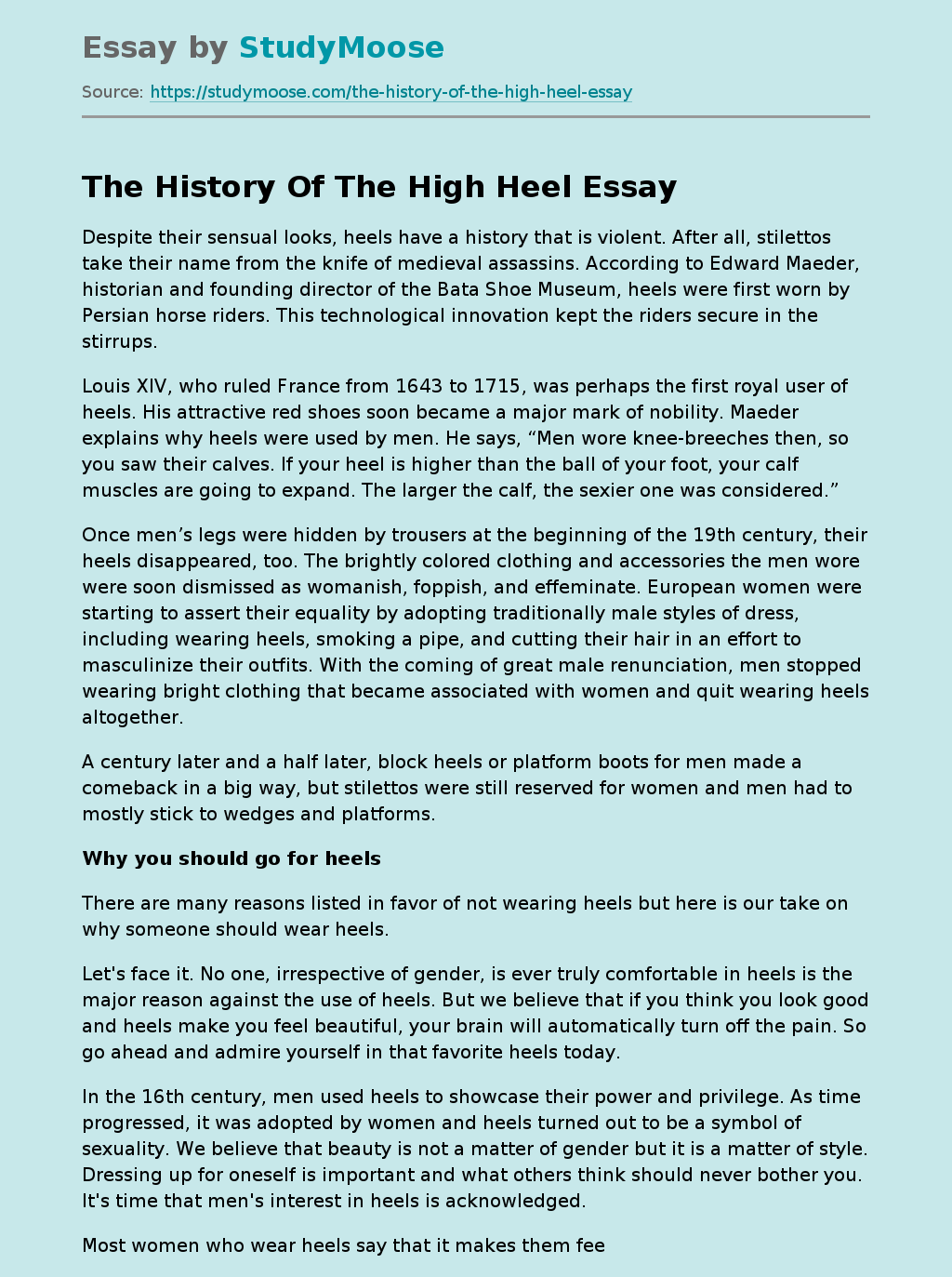