The History of Harley Davidson

Harley Davidson Motor Company was founded by William Harley and Arthur, Walter and William Davidson. It is the producer and manufacturer of iconic and unique motorbikes, which are desired by millions of people around the globe. It is the most recognized company in motorcycle industry, creator of culture, lifestyle and tradition. It is one of few businesses which have gained the admiration and respect of consumers and competitors. History of Harley Davidson Motor Company started in 1901, when William and Arthur started building the engine that would suit into bicycle.

Don't use plagiarized sources. Get your custom essay on
“ The History of Harley Davidson ”
Get custom paper
NEW! smart matching with writer

In 1903 they introduced their first motorcycle, from that time company has been constantly growing and today it is considered as one of the most prestige motorcycle company in the world.

From the very beginning the aim of the company was very clear, to become the leader in motorcycle industry and to produce the best quality motorcycles. Opinions whether company managed to reach this aim are contradictory, but undoubtedly Harley Davidson has become a legend.

Harley Davidson is associated with freedom, adventure, wildness, self-expression and boldness. It’s mantra says “It is not a destination, it is a journey”. Harley Davidson has even it’s own road songs, produced in 1994, it turned out to be a great marketing strategy. After the album has been released, company gained more customers. One of the most popular songs is “Born to be wild”. This song has become a “soundtrack” of Harley Davidson Company. It describes the company’s culture and has become a legendary song. Harley Davidson has remained loyal to tradition and culture, it still represents the same values as it did in early 90’s.

Number one strength of Harley Davidson is loyal brand community. Harley Davidson has always been putting customers satisfaction as a priority. Customers remain loyal to the company not only because of high quality products and unique style of motorcycles, but also because of the image and values that Harley Davidson represents. The strength and power. Harley Davidson established the H.O.G (Harley Owners Group) organization. This organization has become a home for 750,000 members, who share passion and admiration for the brand. H.O.G is the example of how a brand is able to create a subculture. Harley Davidson promoted a wild, free lifestyle. People were and still are attracted to those ideas. By joining the H.O.G they felt the feeling of belonging to Harley’s bold culture.

Especially in 90’s Harley’s ideas were extraordinary, people wanted to be the part of that unique community. Brand recognition, brand preference, brand insistence – Harley has successfully met all these criteria. It is world-wide recognized company, people tend to buy it’s motorcycles rather than other company’s and remain loyal to it. Harley Davidson expanded brand by producing accessories, like helmets, leather jackets, belts, which become a must for most of people who buy a Harley motorbike. Harley Davidson tend to build strong long-term relationships with it’s stakeholders, what relates in positive impact on the company. Being the only major American manufacturer of heavyweight motorcycles is highly beneficial for the company, as well as being the one of main manufacturer and user of V-engine configuration.

Strategy of competing of Harley Davidson focuses on design and quality of products, rather than on price. Therefore, products are expensive, which can be considered as a weakness. High price limits target market, as not everyone can afford the product. Harley Davidson as an American company focuses it’s market on the US. 67% of their revenue come from the United States. Depending on domestic market can lead company to failure. If the United States faces economic crisis, profit of the company will extremely fall. Although Harley’s motorbikes are high quality, competitors such as Kawasaki, Yamaha, Suzuki seems to produce even better quality motorbikes. They are directly focused on quality and speed of their motorbikes. Harley Davidson should consider implementing new technologies and improvements to their motorcycles.

The Asian and European market share have been gaining in recent year. The needs of Harley Davidson in Europe are increasing, which becomes a top one worldwide. Since lots of women and younger riders have been interesting in motorcycle, the range of customers has raised.(Richard, 2004, p9-10)

The European law of bike’s noise level is higher than those of U.S law, which urge the U.S motorcycle noise level to go up. At present, a lot of opponents are equipped with higher financial support and various marketing resource. It means there is greater competition from Harley-Davidson motorcycle on world market.(Richard, 2004, p9-10)

After Harley-Davidson was taken over by AMF, AMF only focused on production rather than product’s quality so that Harley-Davidson’s credibility has been seriously damaged and sales dropped down. Beers joint 13 senior executives Harley-Davidson redeemed from AMF, the company always put quality as the first consideration. They put one hundred million dollars to improve equipment and production processes in order to enhance the quality of products. Harley-Davidson is similar with Rolls-Royce and Ferrari in terms of the manual manufacturing and limited production. Every motor need to be ordered in advanced. In order to reflect the personality of the Harley-Davidson riders, each motorcycle is customized according to every Harley-Davidson enthusiasts and a lot of accessories are available for modification. Thus, it is hard to find two Harley Davidson motorcycles alike.

According to a Harley-Davidson earning report (Wikinvest, 2012), for the first quarter of 2011 it claimed that income had increased 73.5% compared to that of last year and it totally is $119.3 million. At the same time, retail sales had increased by 3.5% and comparing to last year the most sales volume came from Europe. Finally, total income is $1.1 billion from motorcycle sales and had increased by 2.5%. Therefore, good development and objective revenue of company can strengthen customer’s loyalty.

Harley-Davidson has established official website and it offers a quick way for customers to realize the company and gain the information they want. In addition, the website supplies reservation service so the customers can save their time.

Because of Harley-Davidson’s wonderful function, since 1980 Harley-Davidson motorcycle has started to be used as the police car and the company has kept good cooperative relations with local government. Currently, Harley-Davidson police motorcycle services for more than 3600 police and government departments in America, Europe and Asia. They are mainly applied to patrol and performance on some special tasks.

1) The standard Harley-Davidson retails around $30,000. How is investment in a Harley-Davidson more than just a financial investment? Harley-Davidson has got more than just a financial investment because Harley- Davidson understands what the consumers are looking for and maintains satisfying the needs of the consumers. A better understanding of consumer behavior would affect the market strategy of the company. In addition, Haley’s spirit can be summarized as the following three points: passion, pursuit of freedom, the enjoyment of life and those factors can represent how attitudes towards life most people are looking forward to.

2) In what ways is the Harley Davidson brand more than a functional brand?

Functional brand satisfies basic customer needs with a product. Some brands become icons, such as Harley Davidson. Harley Davidson not only produces iconic motorcycles but gives a life time experience, allowing customers to feel the freedom of riding such an iconic item. Over the time H-D has gained millions of fans and customers who remain loyal to the brand. As many say once you ride H-D motorbike it’s impossible to change it for any other bike. In 1983 the HOG (Harley Owners Group) was established. This organization unites members from all over the world, giving opportunity to share love and passion for Harley Davidson. Members organize rides, trips and events. HD created community and subculture.

3) The Harley-Davidson brand is an iconic American Brand, symbolizing the American way. How has this brand achieved such a strong presence around the world, including Australia?

Harley Davidson has become a cult. By tattooing brand’s symbol, one expresses loyalty and love to the brand. Such tattoos give a feeling of belonging to the unique community, relationship between a customer and a brand. Their express emotions, feelings and memories one has with the brand. Harley Davidson is associated with freedom, power, boldness and self-expression. Passion for HD is so strong that many customers choose to tattoo HD’s symbol. It shows how much customers are involved into the brand and its culture.

To sum up, the history of Harley-Davidson was showing in order to know background of Harley-Davidson Company. Also, SWOT Analysis which is strength, weakness, opportunity and threat explained the internal and external information of Harley-Davidson. This report described how 8Ps making marketing orientation more accurate in this company. It is recommended that Harley-Davidson should consider reducing prices to satisfy the younger generation consumers who have lower consuming level. In addition, Harley-Davidson could pay more attention to expanding other regions to get more profit.

The History of Harley Davidson. (2016, Nov 01). Retrieved from http://studymoose.com/the-history-of-harley-davidson-essay 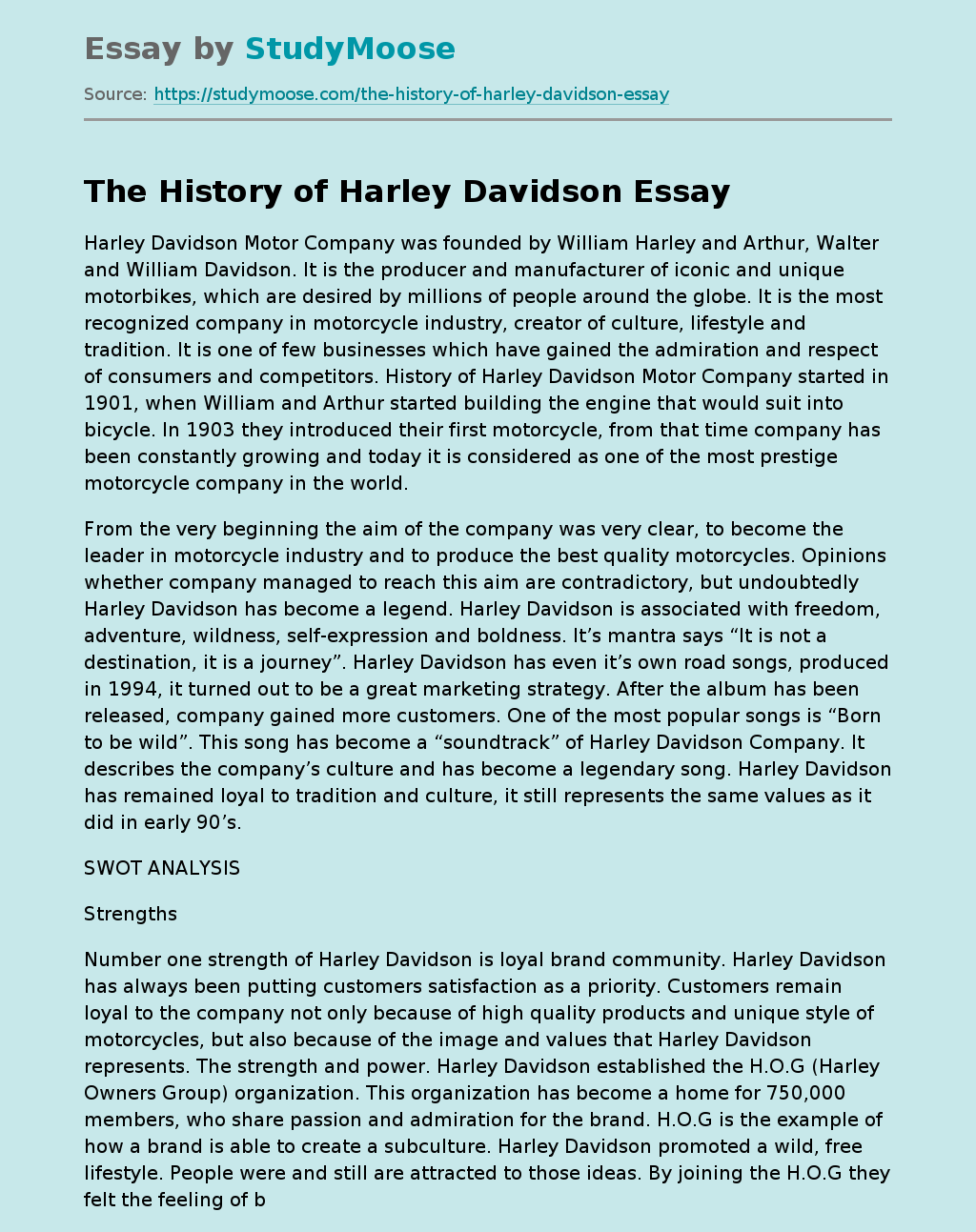