The History of African Music

Don't use plagiarized sources. Get your custom essay on
“ The History of African Music ”
Get custom paper
NEW! smart matching with writer

Paintings on rocks of African dancers, is evidence of their history in which Africans still uphold. Modern people did not consider African music a form of music until the 19th century. The African people had an unusual style by just making noise. The Africans were considered lower standards than the average. So their music was the same as them. No one took notice of their music.

It was personal to their culture. Africa itself is a huge continent. It is triple the size of the United States. It has about 415 million people living in the south.

About 75 percent of all Africans south of the Sahara live in rural areas, mainly in villages (pg100). The people in Africa belong to different ethnic groups. Each ethnic group has its own beliefs, religion, and language. South Africa or Black Africa has different music versions of North Africa. North Africa’s music is mainly classified as Arabic music. Throughout Africa, even though they have different styles, their music has some of the same attributes.

I experience this by singing in my church choir and hearing the words in the songs that send the mess The Africans music carries different significance than that of the American culture. The complicated rhythms, responsive choral singing and flattened, or blue, notes found in black American work songs and church music reflect African traditions (pg. 107). Our music in the American culture is entertaining unless it is Christian music. We listen to the different styles of music to entertain for pleasure.

In Christian music, it sends a message to our spiritual being. For example, when we have a child, we leave the hospital and take the newborn home without any form of music. In African culture, the newborn is given a special song by a witch doctor to guarantee the delivery to be a success. The people of the village sing and dance to every aspect from birth to puberty of each child. They also sang songs to teach life lessons to their children. However, music is much celebrated in similarity when Americans and Africans have marriages, festivals, funerals, and spiritual gatherings.

The History of African Music. (2017, Jan 14). Retrieved from https://studymoose.com/the-history-of-african-music-essay 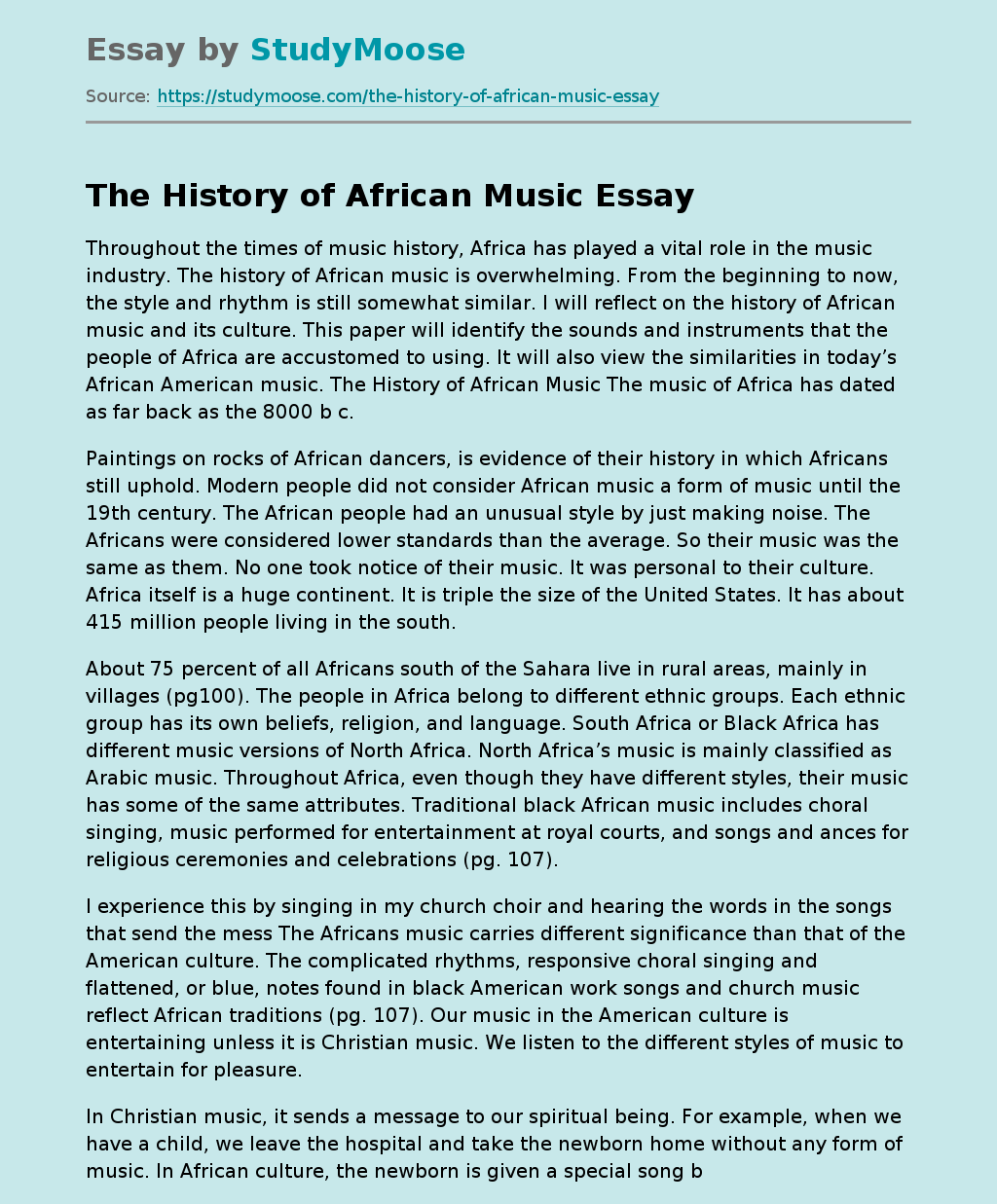