The book, “The Hidden Dimension”, written by Edward T. Hall was published in 1969. The book mainly aims the cultural perception of space by Hall’s proxemics Theory, which also called “anthropology of space” (Hissey, 2004, p.44). Edward T. Hall who is an anthropologist, provides the idea that individuals communicate differently according to the different cultures. Hall uses ideas of space to strengthen his theme.

Synopsis of the BookIn the book, The Hidden Dimension, Hall mainly focuses on the concept of cultural perceptions of space, which affects individuals’ communication.

Don't use plagiarized sources. Get your custom essay on
“ “The Hidden Dimension” by Edward T. Hall ”
Get custom paper
NEW! smart matching with writer

Therefore, Hall uses physiology, biochemistry, psychological, anthropology, and ethnology to build up the idea of human’s cultural perceptions of space, which determines the personal and business relations, art, cross-culture and city planning.

First, Hall uses the studies of animals to show how human’s behaviour are related to the environment. Space limitation is the basic function to show how animals behave disorderly. The experiments of crabs, rats and Sika deer indicate that under different condition of physical distance, animals behave dissimilarly.

If it is too crowding, stress is caused. Besides, visual space and auditory space are important as well since same thing in two individuals is not in the same way. Hall points out that “information received from receptor is modified by culture” (Edward T. Hall, 1969, p41). Individuals receive visions by eyes; receive sounds by ears; receive sensation by skin and muscles. However, Hall uses several examples, such as the tolerant of sounds of Japanese and German, to show individuals from different cultures get different information.

Furthermore, Hall introduces kinaesthetic space, which is day to day living space, to explain the diverse communication in different cultures.

The example of architecture is provided to improve individuals in different cultures experience dissimilar space. Scheme of “culture affect attitude” (Edward T. Hall, 1969, p58) is proved by skin touch, muscle touch and temperature. Art and language are another ways to see the relationship between communication and culture. Then Hall divides space into three categories, which are fixed-feature space, semi-fixed-feature space and information space. In addition, Hall locates four distances of interaction in cultures that are intimate distance; personal distance; social distance; and public distance.

Individuals choose their distance to each other depending on their culture, how they feel and what they are doing. To illustrate how individuals in different cultures communicate in different ways, Hall gives two examples to compare how German, English and French consider space in their cultures and how Japanese and Arab consider space in Japanese culture and Arab culture. Finally, Hall shows humans’ use of space influences architecture and urban renewal.

Hall uses variety of examples from architecture in this book to give the idea of culture perception of space has effect on individuals’ communication.

Critical ReviewThe use of space plays as non-verbal communication role to illustrate that individuals communicate in different ways in cross-culture. The difference is displayed in many aspects, such as distance, language, art, architecture, and visions.

First, distance is the first and most important element in the cross-culture perception of space. Hall identifies three categories of space and four types of distance. Fixed-featured space is fixed space that focuses on the location. For example, a kitchen is the place for cooking. Semi-fixed feature space is more varies that more concentrates on the subjects in the physical location. Take an instance of kitchen again, in some culture, individuals put table in the kitchen and have meal in kitchen. Also, in some culture, kitchen is the not only for cooking, but also a place for housewives talking. Information space, which is more abstract than fixed-feature space and semi-fixed feature space, illustrates the relationship between individuals. Intimate distance refers to close interaction, even skin and muscle touch occurs. In Japan, individuals walk close to each other on street, since there is large population but small land.

On the other hand, in European countries or the State, walking to close to others is not polite. Personal distance is at a certain distance that face to face communication can be occurred, and one can hold or grasp the other individual. In some culture, like in Arab countries, man and women, except wife and husband, cannot be this close to each other. Social distance is the distance that face to face communication happens but individuals can not touch each other. This situation usually takes place in business relations. Public distance is the distance for public occasions. For instance, in SFU lecture rooms, the instructors hold the public distance between the students. Also, instructors have to make sure that every student can hear their voices. Intimate distance and personal distance are verified by different cultures, whereas, social distance and public distance are practically same in all cultures.

In additional, Language and Art are another ways to represent individual communicate in different ways by using space. Individuals from different countries speak different languages. Although Englishman and Americans both speak English, differences do exist. Britain English and American English are different from vocalizations and lexicons. Take an example, “lobby” used by American refers to “hall” used by British; “first floor” in America refers the “second floor” in Britain. Art, as a clue to perception, is a system of communication (Edward T. Hall, 1969, p81). Individuals appreciate art in a certain distance and in a positive space. Broadway opera, which supposed in theatre, never is held on street. If watching ballet dance at a short distance, the dance is not art, but body movement.

Furthermore, by individuals in variety cultures shows different concepts of space, architecture and city design. In German culture, the office doors are usually closed, but in the State, office doors are open. In Englishman’s mind, bedroom is a private space; yet, Americans are willing to share the space unless the door is closed, which means “I am angry” or “Do not disturb”. As well, culture perception of space influents the architectural design in modern cities. In Hong Kong, there are unaccountable skyscrapers. Compared to Hong Kong, Vancouver has much less high buildings. This is simply because of different cultures and individuals’ using of space. Hong Kong is a small island, but has huge population. Since there is no much space, the city is planned to build more high-rises to create more indoor space for individuals. Whereas, Vancouver has huge land but less individuals live in the city, so city planners do not need to construct more space.

Although, cross-culture has various influences on individuals’ perception of space, some culture-perception of space is same in any cultures. Through the animal studies, Behaviours under different conditions of crowding are not same. While individuals are experiencing crowding, they are easily to reach stress. When individuals can not tolerate the stress, then organizational disorders come out. These organizational disorders not only affect individuals, but generations. First, stress causes disruption of social functions. For example, individuals experiencing stress get married later than those not experiencing stress. Then, stress causes disorganization, such as female individuals can not feed their kids; and can not educate children well. Some parents having stress always beat children when children not listen to them. 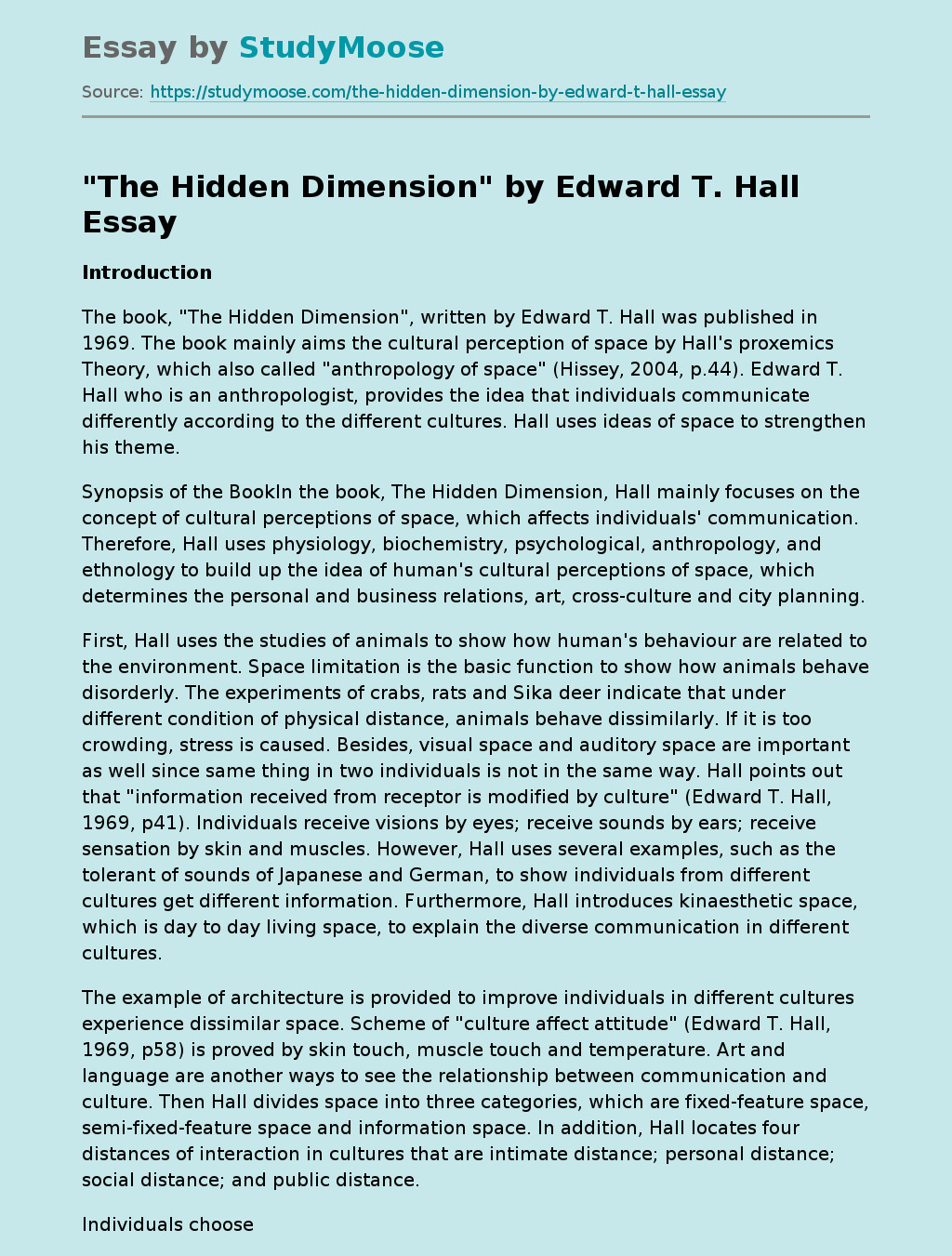