The Harlem Renaissance was a wonderful allotment of advancement for the black poets and writers of the 1920s and early ‘30s. I see the Harlem Renaissance as a time where people gather together and express their work throughout the world for everyone to see the brilliance and talent the black descendants harness. The two authors I picked were W.E.B Du Bois and Langston Hughes. The reason why I picked these two is because of the dedicated work they have flourished during the Harlem Renaissance.

Don't use plagiarized sources. Get your custom essay on
“ The Harlem Renaissance Poets ”
Get custom paper
NEW! smart matching with writer

W.E.B Du Bois was one of the most famous black political leaders during that time. Du Bois had a lot of talent to bring during this fine time as he was the editor of an inspiring magazine called “The Crisis”. In this particular magazine Du Bois expressed that blacks were on the same level and mentally and physically capable of achieving social equality, as so some say, by following white standards and ideals.

W.E.B Du Bois stood for the black racial pride and increased its focus on African culture and heritage. Langston Hughes, which I am about to go into now, was another writer of the Harlem Renaissance, which of whom I admire very much and consider an icon in history, he is known and widely remembered for his works during the movement of racial equality throughout America. I can say that Langston greatly praised his work with dedication and portrayed his own experiences of being an actual African-American. The poem I would like to write about from W.

One poem I chose from Langston Hughes that grabbed my immediate attention is his poem “The Weary Blues”. This poem written by Hughes is very powerful to me and expresses a deep message within for all Americans during that time; double-consciousness is notable all throughout the entire poem. Langston Hughes, who was one of the main focal points of figures of the Harlem Renaissance, tries to remain conscientious to his African-American roots in his foundation. His poem “The Weary Blues” is the perfect example of double-consciousness. The author of the article places an immersed question: Was Langston Hughes able to overcome the “double-consciousness” and take the pot luck with African origins and roots, or did he also not know how to manage to escape from the assimilation in the melting-pot of the American culture? Reading the poem from him, he actually provides the answer, which he states that the poet succeeds in promoting the “folk” (Black) tradition, having to compromise with the compulsory framing into American (White) reality of the form and the content of the subject.

The idiopathic themes expressed in both, Langston Hughes and W.E.B Du Bois during their time period were expounded in great detail. One line from W.E.B Du Bois poem “The Song of the Smoke” said “For blackness was ancient ere whiteness began”, this shows the contradistinctive difference that many questioned when it related to discrimination in America. At the time of the Harlem Renaissance, very few people have influenced the lives of African-Americans, but I could say that W.E.B Du Bois has made a significant impact in the community of his culture. Du Bois is considered more of a person who had great talent and knowledge to help everyone around him, more like an upbringing to freedom. The reason why I admire Bu Bois the most is because he actually organized and went forward on making a change and asseverate the experience of blacks in America, and created a pathway for the “Black Power” movements .

This poem by Langston Hughes called “I, Too” is one of the few poems that really gives you a message you can actually relate to, not just the particular subject stated in the poem, but rather the overall message to human beings. One part that I love from this poem is when he said “Besides, They’ll see how beautiful I am and be ashamed – I, too, am America”. This peculiar message is something to take and think about deep in thought and interpret in a harmonious way, which is why he was so respected and the main figure of the Harlem Renaissance. In my opinion, I think Langston’s “I Too” poem is about giving an irrefutable impact throughout the world. This particular line as well stated in the poem said “But I laugh, And eat well, And grow strong”, this line I chose in particular explains that Hughes isn’t only growing physically as so may interpret, but rather grow mentally which states that Langston does not hold grudges and contain hate, but rather express hopes for the future days ahead.

Picking these two authors is very special and mean a lot to me when writing about them, I find these are the main two that expresses that color doesn’t mean anything and everyone is the same and how America is a place where people unite and treat everyone as if they are family of some sort. You can see the constant messages given in their works, and it is rather important to understand the concept of the messages they are trying to convey.

To conclude my admirations of them I would say W.E.B Du Bois and Langston Hughes as well as many other poets and writers during that time created an effigy of truly brilliant and inspiring work, which peaked during the Harlem Renaissance. Hopefully many would admire these people as a work of art rather than a mere color of the skin, this is more than that and their works prove it. My poem that I created is called “A Painted Picture of Myself”, and I find this poem to express identified themes of the Harlem Renaissance. “A Painted Picture of Myself”:

I am me, I am myself,
I try to be someone different,
But it only comes down to me,
I am a person, I am a human,
We each have our differences;
But in my eyes, we are all the same,
We try to paint an image to everyone,
To think we lasted this long, I am myself;
I am one with that person and only that person,
The distinct figure we see every day,
To ignore the obvious in which we live in;
I can’t be any more determined;
I just painted a picture of myself. 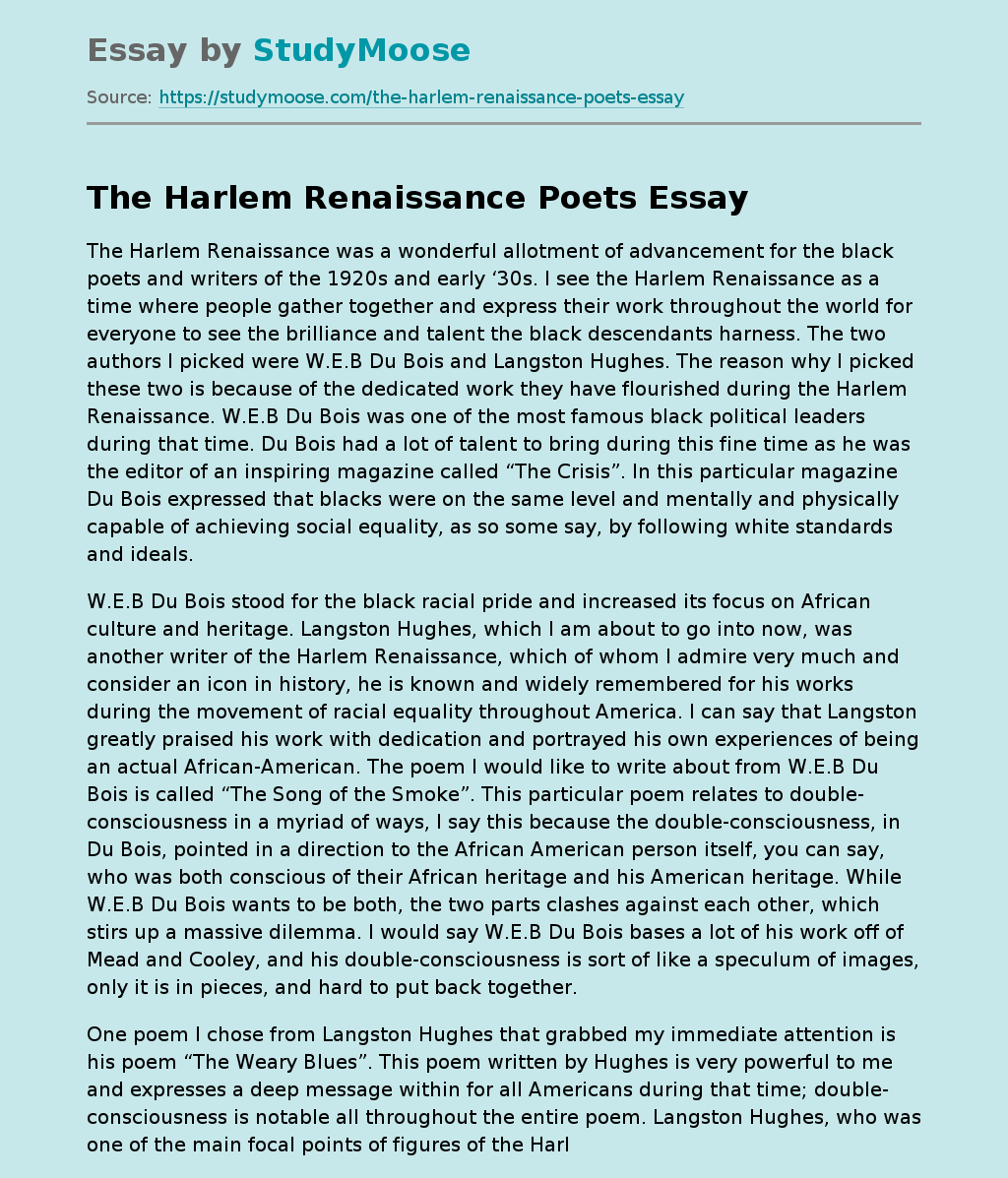