It was first picked up by French feminists and can be witnessed here in ‘The Handmaids Tale’. “I’m a cloud, congealed around a central object the shape of a pear which is hard and more real than I am and glows red with its translucent wrapping. ” This passage is ecrtiture feminine as it celebrates the body with references to the womb ‘central’ and ‘pear’. In this novel, the womb is the focus of the body. Orwell conveys resistance through a relationship that develops between the main characters Winston and Julia.

Don't use plagiarized sources. Get your custom essay on
“ The Handmaids tale vs 1984 ”
Get custom paper
NEW! smart matching with writer

In this society, relationships are extremely unorthodox unless authorised by the regime.

In Oceania the regime, like Gilead’s regime does not allow freedom of thought and speech, as this is the key to resistance. Winston purchases a journal and writes his personal thoughts about the brotherhood, an underground resistance group. Some critics say that this is a product of a Freudian concept. Freud believed that an individual’s actions come from their conscious and unconscious mind.

However, when Winston is captured we discover they are actually an imitation of one, created by Big Brother to entrap thought criminals like Winston. In the two novels, the author’s style aids them to portray their dystopian views. Atwood’s style of writing is often very different to Orwell’s.

‘The Handmaids Tale’ is first person narrative, it is a biased opinion from one persons point of view, this contrasts with the third person narrative in ‘1984’. Margaret Atwood’s novel contains a clipped, precise language as a listing effect, this form of language conveys he oppression of Gilead and suggests that Offred is detaching herself.

This language is commonly seen in the daytime structure. “Above on the white ceiling a relief ornament in the shape of a wreath and in the centre of it a blank space, plastered over, like the place in a face where the eyes has been taken out” However, Atwood’s imagery develops in the night structure with extended metaphors giving semantic fields of the body, non-human nature and fertility their depth. Atwood also uses excessive modification with various similes like: “Like smoke from the unseen fire, a line of fire just below the horizon, brushfire or a burning city”

This example contains a simile and is considerably more detailed. In ‘1984’ George Orwell’s semantic fields are of poverty and sickness when Winston is conforming to the regime. Orwell’s style lacks in metaphorical language, which is a contrast to ‘The Handmaids Tale’ as even in the day structure there is metaphorical speech. However, Orwell does use some modification and metaphors in his novel an example of which is located here: “Her face had turned a milky yellow colour against which her mouth stood out redder than ever”

A similarity between Orwell’s ‘1984’ and Atwood’s novel is when Winston conveys resistance to the regime by visiting the countryside with Julia. This means that in both novels nature is viewed as a means of escape. In the case of 1984 it is the nature discovered in the Golden Country. In order to create a dystopian environment the author will give the novel a specific structure. ‘The Handmaids Tale’ contains a complex structure as it contains a fragmented story line. By this, I mean the novel switches between present day, the recent past and the distant past.

The present day involves the regime and Offred’s thoughts about it. The recent past identifies her training to become a Handmaid with her old friend, Moira and the distant past is Offred’s memories of her husband and child and growing up with her mother. During this, Atwood employs flashbacks into the recent and distant past. This is important as it keeps the main characters memories alive and allows the dystopian to be easier to live in. Atwood structures her novel into day and night times. This shows the balance between resistance and conformity.

The night chapters are considerably smaller than the day chapters to accentuate the oppression of the environment. As I mentioned earlier, the day structure represents conformity to the regime and the night structure is escapism through thought equalling in resistance. Atwood places her novel into chapters and sections of relevant story developments. Another area she produced is the historical notes. These glance at another person’s point of view about the regime, this is a drastic change to the rest of the novel as before the reader only witnessed one person’s opinion of the society, this was by Offred.

Using the historical notes you can view the novel with a different perspective on the regime, the speaker ‘Professor James Darcy Pieioxto’ is in some way supporting the Commander’s views. “If we could identify the elusive ‘Commander’, we felt, at least some progress would have been made” ‘The Handmaids Tale’ is left unfinished in the eyes of the characters. We do not receive much detail but from the historical notes, we gather that Offred was rescued in the ‘black van’ that collected her at the end of the novel and that she then recorded her tale onto tape.

This structure is completely different in ‘1984’ as instead of sections Orwell opted for three parts. Each part contains a different focus then the other. Part one is based around a pessimistic tone of the poverty stricken city. The theme of totalitarianism is introduced as Orwell describes the bleak solitary regime of Big Brother. Orwell goes into great detail of the party and the Ministry of Truth where Winston’s occupation is based. The main character Winston is portrayed as isolated and depressed but he shows conformity in his daily routine. 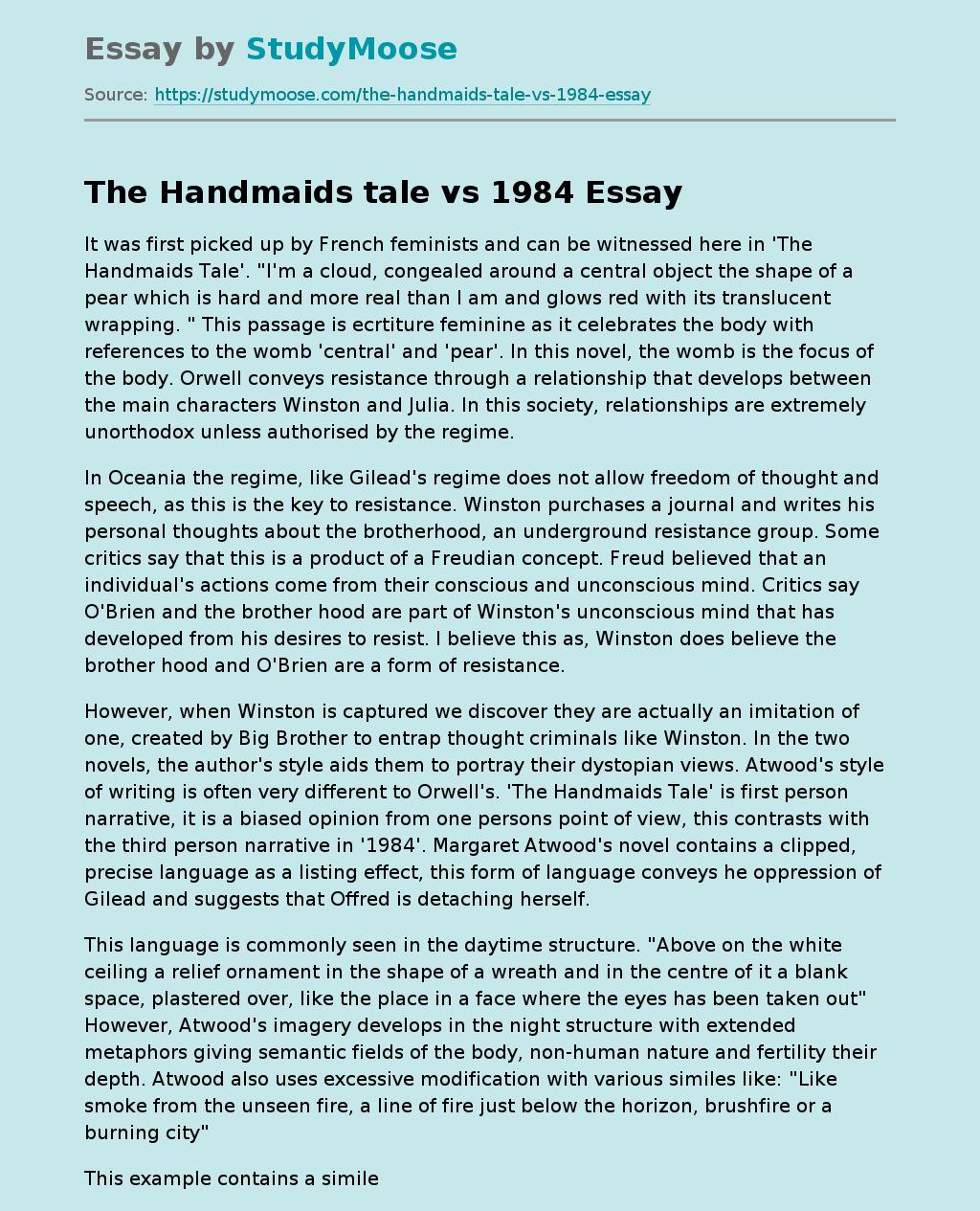