"The Handmaids Tale": emphasis on the domination of women

In Margaret Atwoods novel, “The Handmaids Tale”, the birth rate in the United States had dropped so low that extremists decided to take matters into their own hands by killing off the government, taking over themselves, and reducing the womens role in society to that of a silent birthing machine. One handmaid describes what happened and how it came about as she, too, is forced to comply with the new order. Before the new order, known as the Sons of Jacob, took over, women had a lot to be afraid of.

Don't use plagiarized sources. Get your custom essay on
“ “The Handmaids Tale”: emphasis on the domination of women ”
Get custom paper
NEW! smart matching with writer

They had freedom to do whatever they wanted, but this freedom was severely inhibited by maniacs who could strike at any time. Women followed rules to keep them out of danger, but they were not enforced.

Rules that were never spelled out

“I remember the rules, rules that were never spelled out but that every woman knew; dont open your door to a stranger, even if he is the police.

Make him slide his ID under the door. Dont stop on the road to help a motorist pretending to be in trouble. Keep the locks on and keep going. If anyone whistles, dont turn to look. Dont go into a laundromat, by yourself, at night … Women were not protected then.”(p. 24) Nobody believed it could happen to them. When the Sons of Jacob took over and began to take away their freedom, they accepted it. They were afraid and the Sons gave them some security. Because they accepted the first few laws, it was hard to refuse to not go along with the ones that followed.

When the women were finally stripped of their identities, they felt as though they had deserved it because they had done nothing to try and save any of their other rights. “We looked at one anothers faces and saw dismay, and a certain shame, as if wed been caught doing something we shouldnt. Its outrageous one woman said, but without belief. What was it about this that made us feel we deserved it?”(p. 166) The Sons used this insecurity to round up the women and place them in institutions where they would be “safe”. Once they had them within their clutches, they were able to use them for their own purposes. The key to the whole program was using other women to train and control them. It is hard to go against your own kind, and the Sons knew that if they used men, it wouldnt work.

The characters of women in novel

The women would feel oppressed and strike back as one group, or could too easily seduce the males to get their own way. “Something could be exchanged… We still had our bodies.”(p. 4) By using other women, known as the Aunts, they could tell the women that they understood and knew what it was like, and that all this was for their own good, to keep them safe and make their world a better place. There were many of these training facilities, but we learn the most about the red centers, where the women are trained to be handmaidens. In other words, mistresses, to bear children for wives who were no longer capable of child birth, but too important to get rid of. Older women, and some incapable of child birth were trained as Marthas. They were servants to the wives and raised the children, if they were lucky enough to have one. The poorer women were called Econowives and performed the duties of wife, handmaiden and Martha. The final category was the “unwomen”; those who had committed some crime such as abortion, or who were too old to be good for anything. These “unwomen” were sent to the edges of the colonies to clean up nuclear waste or work in the industries. Both of which would soon lead to death. The women were distinguished by the color of robes they wore, which reached to the ground, revealing nothing. This was another way of keeping them safe, so men would not be tempted. The handmaids wore red, the Marthas green, the wives blue, daughters white, the unwomen wore grey, and “the striped dresses, red and blue and green and cheap and skimpy, mark the women of the poorer men.”(p. 23) the econowives.

“Sometimes there is a woman all in black, a widow. There used to be more of them, but they seem to be diminishing.”(p. 23) The Sons of Jacob did not want any fertile women to go to waste. The handmaids and Marthas were then given positions in the houses. Marthas were permanent, but a handmaid changed every three years, if they lasted that long. Becoming pregnant was always first and foremost in their minds. Their lives depended on it. The handmaid telling the story grew to despise her body because it determined who she was so completely. Yet, “No woman in her right mind, these days, would seek to prevent a birth, should she be so lucky as to conceive.”(p. 32) The children of the handmaids were to become the daughters and be married off to the soldiers and begin reproducing as soon as possible. Once more daughters were born and raised, it was planned that there would no longer be any need for the handmaids. The wives had only the duty of hostess, tending the garden, and knitting scarves for the men in the front lines.

The wife to which the handmaid served, had in the past given, “speeches about the sanctity of the home, about how women should stay home. Serena Joy didnt do this herself, she made speeches instead, but she presented this failure of hers as a sacrifice she was making for the good of all.” Now, “She stays in her home, but it doesnt seem to agree with her – How furious she must be, now that shes been taken at her word.”(p. 43) Before the Sons of Jacob took over, there were many reasons why people were no longer having children at the normal rate. First, the pollution, diseases, nuclear problems and resulting mutants deterred people from having children because the future looked pretty bleak. Secondly, crime rate was very high, with most of them being sexual atrocities. Women and children were in danger, yet many people denied that such things could ever happen to them, and did nothing to stop it. Thirdly, everyone had become very materialistic. People spent their whole lives striving to be the best and have the most, giving no thought to others, and having no time or money for children. People were afraid to bring a child up in a world such as it was, and abortions and birth control devices were common. The blame, however, was placed on the women, since they could choose whether or not to bear children. Yet people still were desperate for children, and wanted them at any cost. “I turned around and she was disappearing down the aisle, in the arms of a woman Id never seen before… I thought it was an isolated incident, at the time…”(p. 59) Once the Sons took over, this became the norm. Children were taken from women who were deemed unfit, and given to people who would raise them “right”.

The Sons of Jacob

All for the good of their country. “Better never means better for everyone, … It always means worse, for some.”(p. 198) People did not want to acknowledge how society was falling to pieces around them. “We lived, as usual, by ignoring. Ignoring isnt the same as ignorance, you have to work at it.”(p. 53) The Sons created a world where it would be safe for children, and women. It also eliminated sex. It was no longer for enjoyment, but a necessity for life. Before it had been out of control, “There were stories in the newspapers… but they were about other women, and the men who did such things were other men. None of them were the men we knew. The newspaper stories were like dreams to us, bad dreams dreamt by others.”(p. 53) People had the freedom to do whatever they wanted, and many took advantage of this, “We seemed to be able to choose, then. We were a society dying… of too much choice.”(p. 24) The Sons took away their freedom of choice and gave them something else, “There is more than one kind of freedom… Freedom to and freedom from. In the days of anarchy, it was freedom to. Now you are being given freedom from. Dont underrate it.”(p. 24) The Sons of Jacob were able to obtain control over society, because society was ready for a change. People were sick of living in fear and afraid for their future. The Sons changed this by dominating the women by giving them strict rules to follow and reducing their role in life to that of giving life. However, they also attempt to suppress the need to touch, which will be their undoing. Works Cited Atwood, Margaret. The Handmaids Tale. Toronto: McClelland-Bantam, Inc., 1985.

"The Handmaids Tale": emphasis on the domination of women. (2020, Jun 02). Retrieved from http://studymoose.com/the-handmaids-tale-emphasis-on-the-domination-of-women-essay 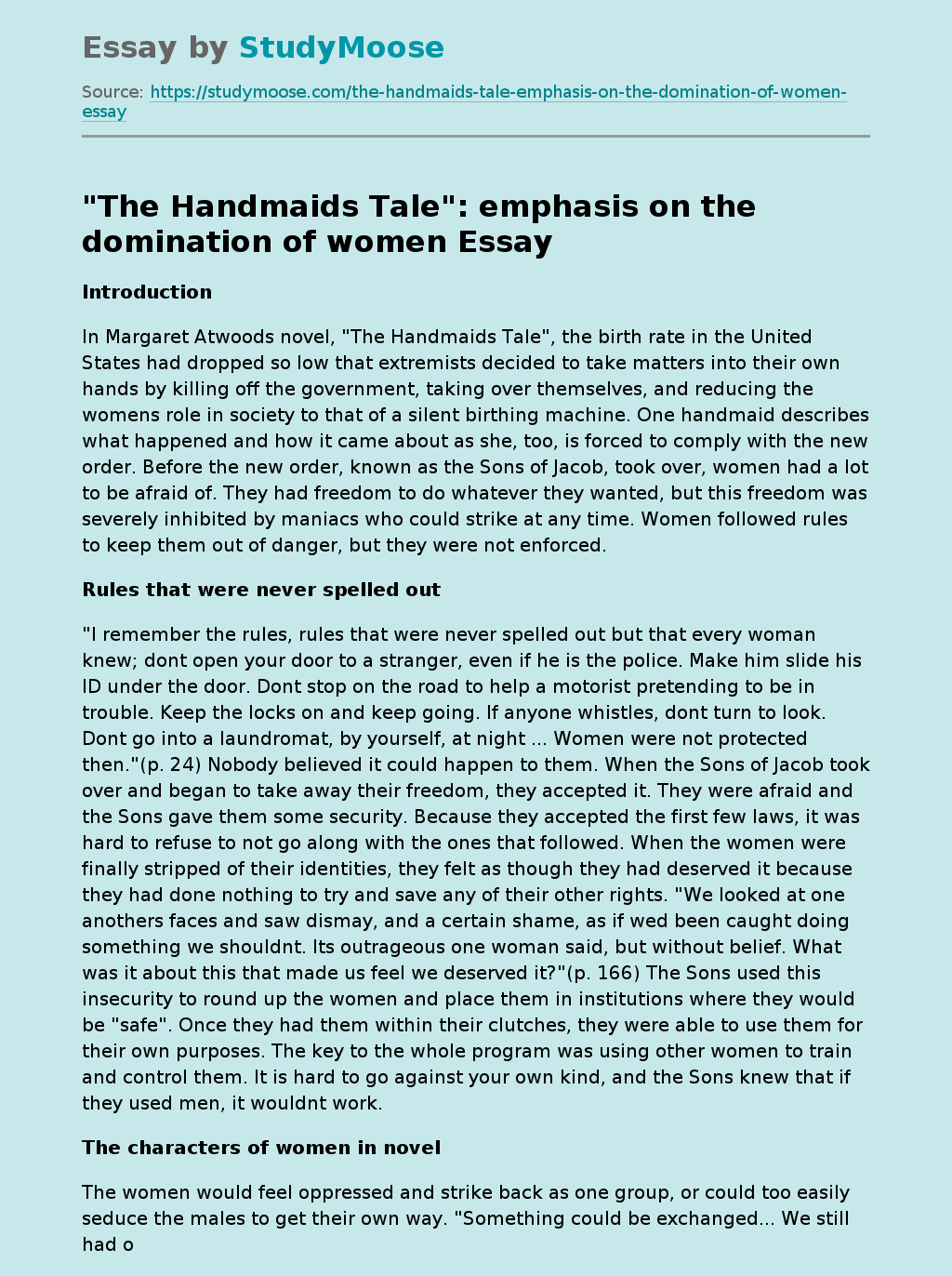