In the olden days, religion and politics went hand in hand. The church either ran the land or had a strangle hold on the people. If the church thought there was one way to do something, one had to do as the church requested or suffer great penalty. To go against the church was to go against God, and that meant death. The king was supposed to be chosen by God to rule the people in the way he commanded.

The king was the closest thing to God on earth. Monarchs generally ruled hand in hand with the church. As the monarchy’s rein started to come to an end, the church’s tight grip on the citizens slowly started to loosen. With the implication of democracy, the church lost all real power to make laws and actually govern the people. The church still held power over peoples’ morals, but without the monarchy’s to enforce it the church’s found their power decreasing.

The government and the church are interchangeable

In Margaret Atwood’s The Handmaid’s Tale, the government and the church are interchangeable. The government is what used to be called the church, they have come together to become one unit of power. The power of a modern day government with all the knowledge and weapons combined with the fanaticism of a medieval based church create a dictatorship like none other. The novel deals with the treatment of children harshly for a society which views children as their last hope, their most valuable commodity.

Children are taken away from their homes to be given to the privileged, and women are forced to give birth to babies they can not keep.

The society of Gilead takes the views of a traditional religious monarchy and enforces them with modern day power. In the novel The Handmaid’s Tale, there is a place called the “Red Center”, which is a training facility. When one thinks of a training facility they tend to invision a military base with young soldiers learning what they need to know to survive. Atwood’s “Red Center” is very similar to this type of facility; it has soldiers inside the facility and people are being taught how to survive. Women in the “Red Center” are being taught how to become submissive to the new order.

The “Red Center” is the place they take women who they believe are prime child bearers, and the women are taught how to become Handmaids. A Handmaid is a woman who goes into a home, usually of a high ranking official, to get pregnant because in this age of pollution and death, may people are unable to procreate. The Handmaids are sent to live in the homes and take the name of the male in the household, where their goal is to become pregnant. If she does not within three terms in three separate houses she is no longer considered “helpful” to society and may be sent away to the colonies to live out the rest of her life cleaning up radioactive waste.

The use of a surrogate mother

In modern times when a couple is not able to have children and is not eligible for adoption, one possible choice is the use of a surrogate mother. A surrogate mother is when the husbands sperm is injected into another fertile female, who then gives birth to the baby and gives the it to the couple. This practice is not all that common but still can be found happening in various places around the world. The use of a surrogate mother often leaves emotional scars for the biological mother and can possibly end up in the courts if the she changes her mind, and wishes to keep the child.

Children in Giliead are a valuable commodity. Custody of a child depends not on birth rights, but on power and status of an individual. In the early years of Gilead, a child could have easily been taken away from a family and given to a powerful commander or anyone of high status. As the years went by, the under class were simply not able to have any children, the right reserved for only the rich and powerful. Any woman who had the ability to have children were taken away from there homes and forced to become Handmaids for the elite.

The public was told that it was all for the good of the society, and if anyone resisted, they were delt with quickly and harshly. This was no longer a democracy. Families were torn apart with no hope for reconcile. Custody depended on status only. In our society Custody is almost always given to the birth parents. Sometimes custody can be taken away from a couple if they have proven themselves unfit parents. Custody can be given to the state or it can be given to other family members if they apply for it. Each year, cases of children being taken out of the homes of their unfit parents and being given to there grandparents or other such relatives increases.

The social conditions and the ability for parents

As social conditions and the ability for parents to remain fit decrease, the rate of grandparents applying for custody of their grandchildren increases. The political structure of Gilead is based around the church. The laws are devised through religion and democracy is no longer valid. Society has reverted back to the medieval days when the church and the monarchy ruled hand in hand and where a minuscule upper class controlled a huge lower class. The values of Gilead have reverted back to a holy conservative view, where men have a higher status than women and where classes are very distinct. In modern day North America, the liberal views of the sixties and seventies are being shot down with mass aggression, as every major United States President candidate since 1988 has used traditional family values as there main platform in running for office.

Politicians like Dan Quale are condemning the single parent household and speaking out against such single parent role models such as Television’s Murphy Brown. In Canada, three members of Preston Manning’s Reform party were kicked out of the caucus for speaking out against homosexual rights and supporting the more traditional view of strait only marriages. As more and more politicians use traditional values of the fifties as a platform to get elected into office, more and more liberals get fed up with the political system because they feel that there is no candidate that expresses their opinions.

Because most politicians feel that most of the voting population is conservative, they try to increase their chances of getting elected by trying to appeal to the conservative majority. This causes a lack of options for voters if the candidates have basically the same stance on the issues. The common threads between Gilead and our own society are surprising similar if one looks closely enough. The possibility of things common in our every day society taken out of control by fanatics is not all that hard to comprehend. It is possible that the chain of events that lead a society to Gilead has already started to happen.

The make believe future world of Gilead is just that, make believe, but the possibility of extremists taking us to a similar point is very real. Incidents like the Oklahoma bombing, the stand off in Idaho with right wing radicals, and the Unabomber should show us that people with radical ideas are willing to use force to get their views out to the public. Such shows of force and extreme ideas are exactly how the society of Gilead was founded. 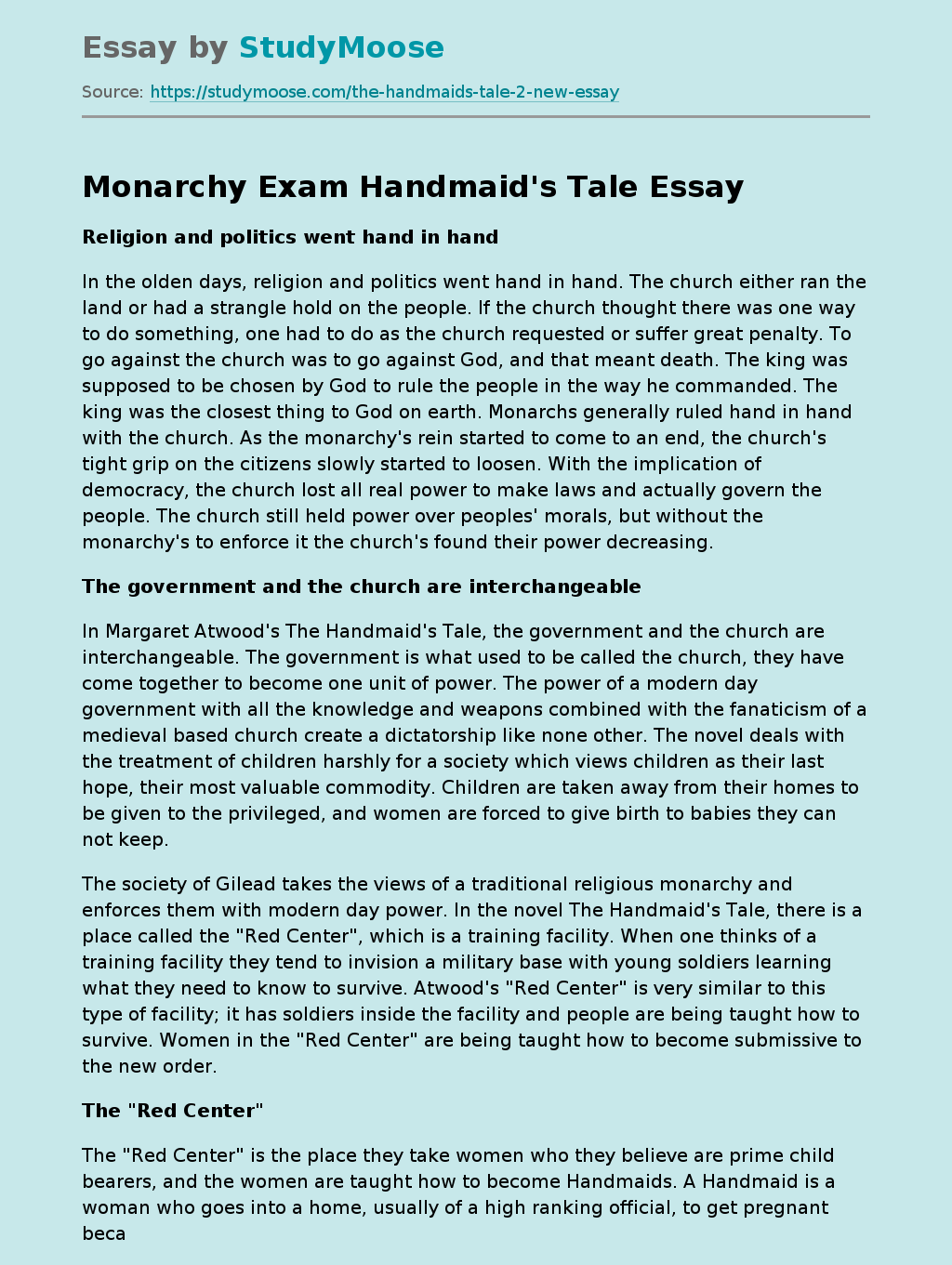