The Gutting of Couffignal Analysis

The Gutting of Couffignal is a crime story written by Dashiell Hammet. It is about the robbing and stealing of bank, Jewelry stores and wedding presents on the island of Couffignal. Couffignal is a small island connected by a wooden bridge to the mainland. The main street contains bank, hotels, jewelry stores and other usual stores. The higher part of the road lives the owners and rulers of the island. One of the rulers, The Henderixson family is having a wedding and they hired a detective to guard the valuable wedding presents.

Don't use plagiarized sources. Get your custom essay on
“ The Gutting of Couffignal Analysis ”
Get custom paper
NEW! smart matching with writer

However, the criminals used various strategies to steal the presents, but they did not succeed at the end. Consider the opening of the story, the story begins with a very detailed description of Couffignal Island, where the crime takes place in. The description offers the landscape and structure of the island, including the wooden bridge connecting between the island and the mainland, the cliff, the street and the buildings.

The beginning sets up a clear image of the place, the purpose of giving such an image is to foreshadow and make the readers wonder about the escape route of the criminals.

The beginning also particularly describes the upper level people who are the owner and rulers of the island, and this automatically makes the readers think that the crime is going to be related and involved with these people. So the opening of the story is basically giving a general background information of the crime, and it gives some sort of hints to the reader of what is going to happen to grab the reader’s attention and interests. Consider the narrator, the narrator of the story is introduced right after the island description. The narrator start to use “I” in the 5th paragraph, he said: “It was some time after midnight. I was sitting in a secondstory room in Couffignal’s largest house.” This shows that he must be one of the characters who are involved in the story, he is not just some story teller who has nothing to do with the content of the story.

Soon in the next paragraph, his identity is introduced, the narrator is the detective. “Of all the work that comes to a private detective (except divorce work, which the Continental Detective Agency doesn’t handle) I like weddings as little as any.” The narrator is the detective himself and he is hired to protect the wedding presents. Normally, people would think it is weird to protect the wedding presents, and nobody would pay extra money to hire a detective to protect their wedding presents. However, it is explained in the previous paragraph that the value of the presents would add up to something between fifty and a hundred thousand dollars. So this solves the reader’s doubt, since the presents are so valuable, it is reasonable to protect them, and it is obvious that the extra money paid to the detective has no comparison with the value of these presents.

In paragraph 8, a few other characters are introduced, the admiral and earl from England, ex-president of a South American country, the Danish baron, Russian princess and general, ambassador from a Central European country. This paragraph is very important, because the reader would want to know who are the people involved in the story. By giving a brief description of the characters, readers will have a much clear understanding of the content when the crime happens. They will start to think who has the highest possibility to be the criminal, and this will make the reading much more fun. In this paragraph, the characters’ nationality are also introduced, and this is very important since the criminals in this story are not Americans, they are from another country, so it is important to let the readers know the nationality of each character. Consider the characteristics of the detective, it is obvious that he is a very experienced detective.

First of all, he said that he does not like weddings and this shows that he had done them before. He also said that theoretically detective is supposed to make himself indistinguishable, but it never works, and it will not make much difference if he does not hide himself. So this shows that he knows how things should work out the best. He also knows the common tricks people use to steal things and he has successfully prevented them to happen when some sneaky people tried to steal the gifts. This detective is also a very vigilant and smart person. While all the visitors left the house, he still choose to stay with the presents, and he will catch everything abnormal happening around him. When he is watching the presents, the light suddenly turned off, he immediately got rid of the glowing end of the cigarette because he wants to hide himself so nobody can see him in the dark. He reacts very quickly and calmly, he is a very intelligent person.

Consider the crime, it is done by a group of Russian people who have planned this action for a long time. It is a massive action plan that involves dozens of criminals, and the leader of the terrorist organization is someone that nobody would think of until the very end of the story, Russian Princess Zhukovski. The action plan is to rob the bank and jewelry stores in Couffignal, and meanwhile to steal the most valuable wedding presents in Henderixson’s house. The Russian general is leading the group of criminals to rob the bank and Jewelry store, and the Princess goes over to the Henderixon to get the detective out of the house, then she goes back to the house to steal the wedding present and kills two servants who saw her. They think everything is going smoothly, but they do not expect the detective to be so genius.

The detective catches every mistake the criminals make and analyzes all the details and processes of the crime, and then he comes to the shocking conclusion that the Princess is the leader of the criminal. Since he has all the details of the procedure of the crime action and the evidences, the Princess could not argue. She admitted that she is the leader, and the reason they are doing such things is because their failures in the past. They failed in everything they had done, running a restaurant, teaching music and languages, her description was: “In London we opened a Russian restaurant, but London was suddenly full of Russian restaurants, and ours became, instead of a means of livelihood, a source of loss. We tried teaching music and languages, and so on. In short, we hit on all the means of earning our living that other Russian exiles hit upon, and so Always found ourselves in overcrowded, and thus unprofitable, fields.”

Therefore, the non-ideal life put them into a difficult situation that forces them to do such evil things, unfortunately they have failed again. Consider the structure of the story, it is very clear and easy for the readers to read. The story goes in the chronological order, and once a section ends, or something new is about to happen, there is always a gap between the paragraphs to separate them, so the reader can anticipate that something new is going to happen. At the end of the story, the narrator has a description of what actually happened, and he listed all the facts of why Princess Zhukovski is the criminal, and that makes the reader understand the reason very easily and clearly. The Gutting of Couffignal is a very exciting crime story, the content of the story deals with robbing bank, Jewelry stores, and stealing wedding presents. The story shows the rapacious of people, and it also tells the reader that never choose the evil way to solve problems when people encounter difficulties in their life, because they are never going to be success.

The Gutting of Couffignal Analysis. (2016, Mar 09). Retrieved from https://studymoose.com/the-gutting-of-couffignal-analysis-essay 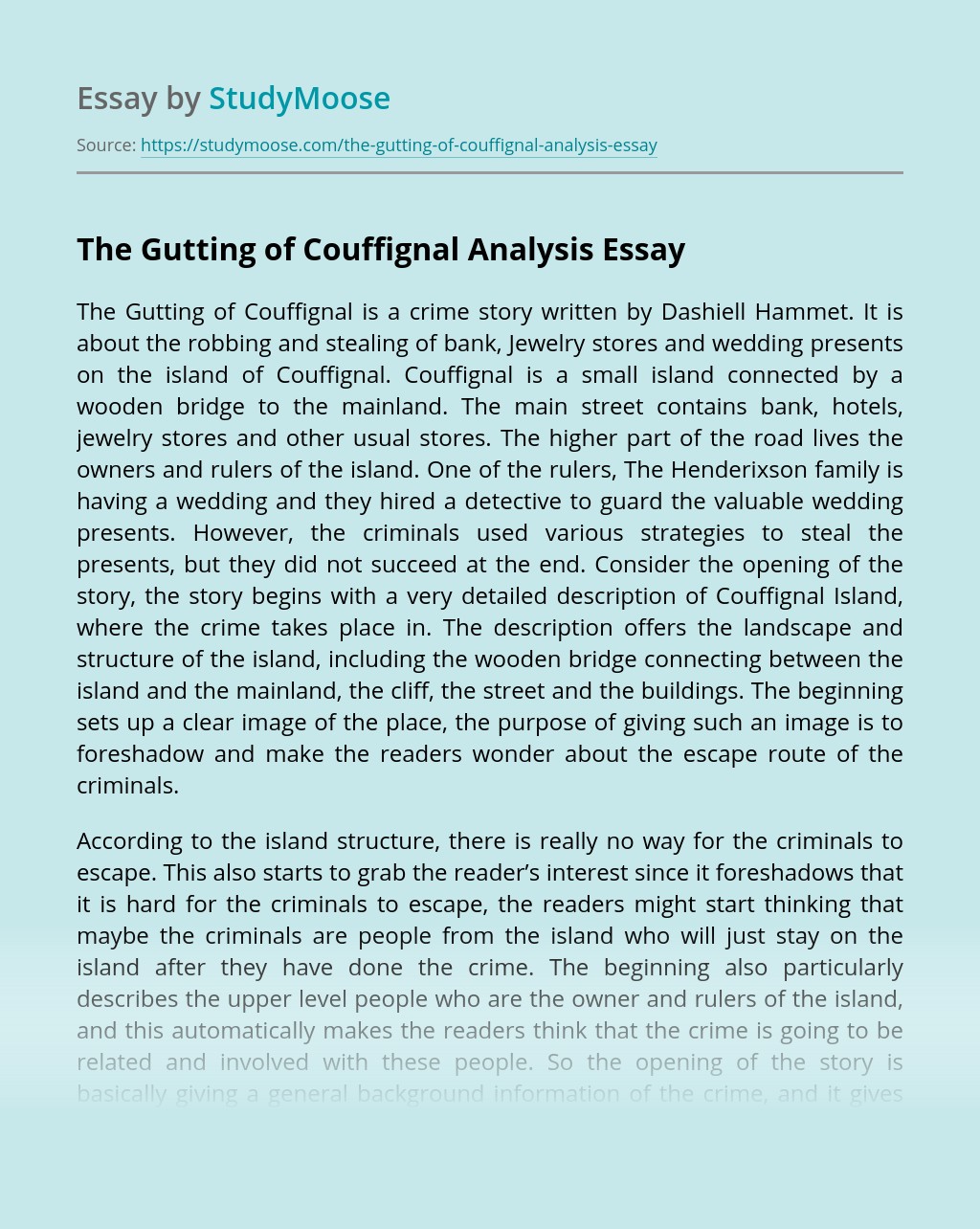