The Greatest Athlete Of All Time Michael Jordan

I can tell you Eight reasons why Michael Jordan is the greatest player and athlete ever. Which is, Number 1 is his All defensive selections. All though most of his statistics were on the offensive ball but some forget the dominant player he was on defense. His nine selections to the All-Defensive first team are tied for the most in NBA history with Kobe Bryant, Kevin Garnett, and Gary Payton. Number 2 is The “Shot”, One of the first clutch moments of his career was ‘The Shot’ to sink the Cleveland Cavaliers in the first round of the 1989 Eastern Conference playoffs.

Don't use plagiarized sources. Get your custom essay on
“ The Greatest Athlete Of All Time Michael Jordan  ”
Get custom paper
NEW! smart matching with writer

Number 3 is Michael Jordan’s scoring with consistency, Jordan suited up for the Chicago Bulls 930 times in his career. He scored at least 60 points on four different occasions with the team. He also scored 20 points before the half with an injury, that’s not any other athlete. Number 4 is his NBA Titles, MJ still managed to guide the Bulls to six NBA titles and he won the Finals MVP award all six times he won.

Number 5 ‘The shrug’, MJ still managed to guide the Bulls to six NBA titles and he won the Finals MVP award all six times he won. Number 6, Jordan’s incredible “Flu Game”, the most famous individual performance in NBA history, the ‘Flu Game’ was played in Game 5 of the NBA Finals. Jordan looked as if he would collapse on the court at any moment as he was terribly ill. Somehow, he did what he does, which is power through to score 38 points and set the Bulls up to clinch an NBA title the next game.

By the end of the affair, he collapsed into Scottie Pippen’s arms, an iconic moment in NBA history.

Number 7, Dunk champion, Jordan won two NBA Slam Dunk titles. on his way to dunking from the free-throw line. Lastly Number 8, The “ Three-Peat”.The golden standard for winning championships in today’s NBA is to win not just one title, but three in a row. Jordan did that twice in his career, taking a break in between to give minor league baseball a shot.

The Greatest Athlete Of All Time Michael Jordan . (2021, Mar 16). Retrieved from https://studymoose.com/the-greatest-athlete-of-all-time-michael-jordan-essay 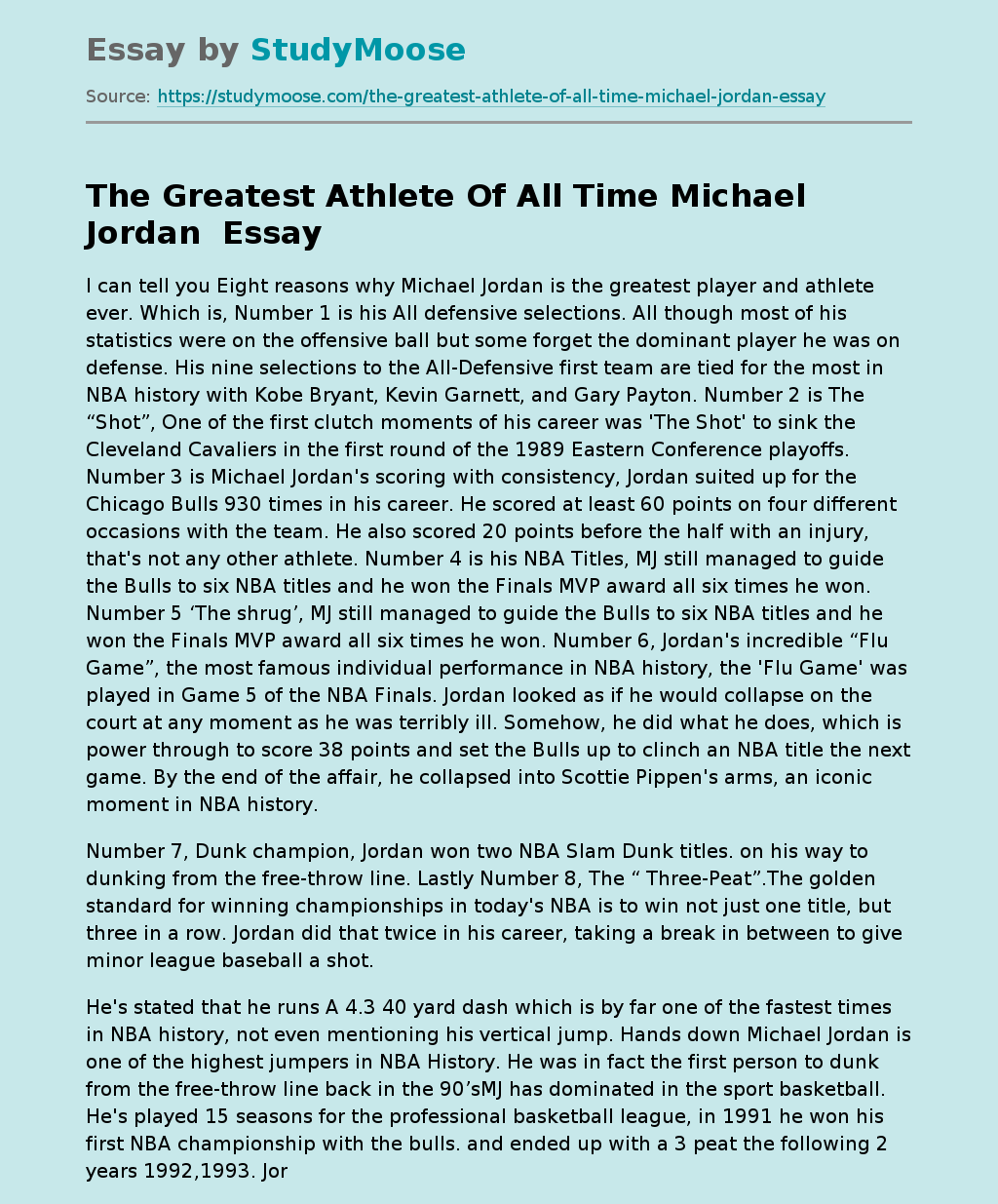