The Great Scarf of Birds

Poetry is structured in several different ways. Much of the author’s way of writing converges the reader into knowing how to interpret the writing. John Updike is on an artificial man-made field (the golf field), and this foreshadows his eventual realization of his detachment from nature. He is playing at Cape Ann in October, and analyzes the nature around him. At the end of the poem, he states that after viewing this unforgettable imagery, his heart had been lifted. He talks of how the nature upon further analyzing, has become less marvelous, and the speaker’s concluding response is highlighted by the poem’s strong use of remarkable organization, insightful diction, exhilarating figurative language.

Don't use plagiarized sources. Get your custom essay on
“ The Great Scarf of Birds ”
Get custom paper
NEW! smart matching with writer

Organization is very important throughout this poem. The author lays out his descriptions clearly. “Ripe apples were caught like red fish in the nets of their branches.” (Lines 3-4). This descriptive language shows the respect for nature the man has. It also symbolizes the apple’s fate being decided upon the branch, similar to how a fish’s fate is decided by something other then the fish itself because it is trapped in the net.

Updike uses lots of colorful organization as he describes nature and its qualities. “The maples were colored like apples, part orange and red, part green.” (Lines 4-6). The descriptive language coming from this writing shows the very epicenter of human nature to the writer. The tone is extremely positive, and the organization of the entire poem throughout helps the concluding response.

In Line 11, the poet states that the “trumpeting made us look up and around”. This line shows the reason as to why the author has begun to look around, noticing the imperfections the latter stanzas describe. The poem starts of in a positive attitude, however as the poem progresses the author begins to analyze nature more closely, and it becomes apparent to him that nature had become “…less marvelous…” (Line 25). After over analyzing nature, he has come to the conclusion that nature is beautiful as it is, but once over speculation comes into play, nature loses some of its glory. Once his heart is lifted, he sees the true beauty of nature and it’s true meaning.

Diction affects the tone of the passage. Starting from line 14, the diction evolves into a more negative view. He uses biblical reference towards the beginning of the stanza. He begins to analyze his surroundings more rigorously, and sees the differences in how they look from a distance, to how they appear close by. Once this negative connotation has begun, the flock is said to be “paled, pulsed, compressed, distended, yet held an identity firm” (Lines 20-21). The author’s choice of words as in “less marvelous” (line 25) indicates his intention for making his lines definite, giving it a solid state of meaning.

It symbolizes that the feeling of someone longing for something, and once they receive it are not as impressed by it. The diction plays a critical role when the tone of the qualities of nature are exposed. The author conveys the “trumpeting” of the geese as an exaltation to the beauty and simplicity of nature. “A cloud appeared, a cloud of dots like iron filings which a magnet underneath the paper undulates” (Lines 16-18). The iron filings in this phrase symbolize the issues the man faces. Once he looks closely at the flock, he realizes that these issues are only miniscule and do not add up to life in general. This elates him, thus concluding him to lift his heart.

The figurative language throughout this poem helps describe the author’s concluding intention. “The maples were colored like apples, part orange and red, part green.” (Lines 5-7). This simile is comparing the color of the leaves of the maple trees to apples. The transparent elm trees represent empty trees as they dance by the wind, waving around displaying the sky. Updike compares the “cloud of dots” (Line 16) to a flock of birds. Using this form of simile, he compares the vivid world that engulfs all these views of nature, and condenses it into a view in a fresh and colorful environment. A scarf symbolizes something that is being covered.

As his heart lifts at the conclusion fo the poem, so does the scarf, and he realizes that although if looked at closely there are imperfections, he looks past them to see the bigger and better picture. “Swinging vases full of sky” (Line 8). He uses imagery to enhance the significance of how the trees move, to help the reader understand what is happening in the poem. Using proper figurative language, Updike has twirled the poem from positive to negative, and then presented the reader that through his proper use of figurative language his heart has been lifted. The descriptive imagery helps the reader a great deal, and indicates its significance in literature.

The Scarf of Birds by John Updike uses many descriptive forms to help the author tell his audience his conclusion about nature. He realizes that from a distance everything looks good and peaceful, but once closely examined, everything is slightly different. He goes on to understand that single issues that represent the dots in the cloud are not that big of a deal, since there is a bigger picture to be looked at, and this optimism lifts his heart. Once his heart has been lifted, he feels that his true inner meaning of nature has been unearthed. Using apposite organization, rapturous diction, and zealous figurative language, John Updike formulates the reader for his concluding response.

The Great Scarf of Birds. (2017, Feb 04). Retrieved from https://studymoose.com/the-great-scarf-of-birds-essay 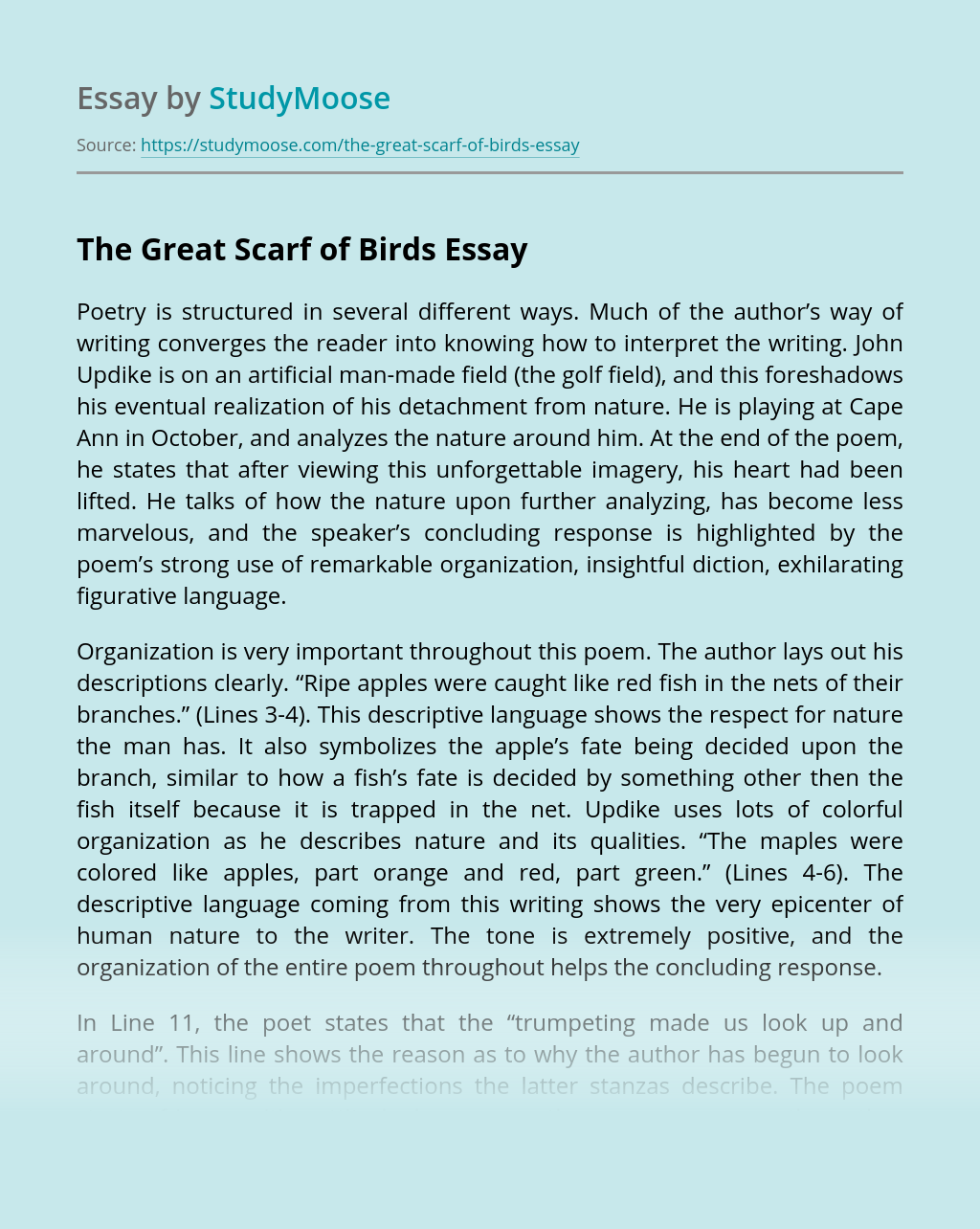