In the start of Chapter 1, the narrator introduces himself as a young man named Nick Carraway. He shares some advice given to him by his father about making judgments. His father tells him not to be so quick to judge others, keeping in mind the privilege he has had during his life. Because of this unusual habit to keep his opinions to himself, he often attracts the attention of strange people. The protagonist is brought into discussion when Carraway explains that Gatsby represents his wishes of affluence.

Don't use plagiarized sources. Get your custom essay on
“ The Great Gatsby Summary ”
Get custom paper
NEW! smart matching with writer

In 1915, he graduates from Yale about 25 years after his father and soon after fought in World War I. When he arrives home, it seems life in the Middle West was moving too slow for him, so he decides to move towards the East, to New York, in hopes of further educating himself. There, he lives in a place called West Egg, a part of Long Island, in a rented house squished between two large houses; one of these houses, being Gatsby’s mansion.

One evening, he drove to have dinner with his cousin Daisy and her husband, one of Nick’s former college peers, Tom Buchanan. As a very accomplished man, he was highly respected for his feats, especially his football career during his time at New Haven. The wealthy couple inexplicably spent a year in France and then finally made a permanent move into the East. As his eyes trace the framework of the mansion, Carraway describes some of its elaborate details, including its scenery, and environment, until he finally sees Buchanan standing on the porch dressed in his riding clothes.

Tom, almost by force, turns Nick around with one arm and leads him into the house. Once they enter the house they are met by Daisy and her friend Jordan Baker, a competitive golfer. To his surprise, Miss Baker showed no interest in his arrival, and her lack of interest almost brought Carraway to apologize for interrupting them with his arrival. During the dinner, Miss Baker mentions the one person from West Egg that she knows is Gatsby. Tom shares the writings of a book, called “The Rise of the Colored Empire,” to the his guests. The book includes racist beliefs and speaks of white people as the dominant race. As they continue to talk, Tom is interrupted by a phone call and excuses himself. Jordan reveals to Nick that the call is from Tom’s mistress from New York. A little while after dinner, Jordan excuses herself early to go to bed because of a golf tournament she has the next morning.

Tom and Daisy joke to Nick about he and Jordan seeing each other. Just before he leaves, the couple stops him to tell him that they heard he was engaged to a woman from the West. Although their interest in his status make them seem less vain, he tells them that it is untrue. When Nick arrives home, he sits outside for a bit appreciating the night sky. He notices the silhouette of a young man standing by Gatsby’s mansion, staring into the distance. Carraway soon realizes the figure is his mysterious neighbor, Mr. Gatsby. In the distance, he looks towards the sea at a green light, and when he looks back Gatsby had disappeared.

In between New York and West Egg is a valley covered in ashes. Men, turned gray from dust, shovel up the blanket of ashes that lay on the ground. Two large blue eyes oversee the town through a pair of yellow glasses on an old advertisement board from Doctor T.J. Eckleburg. The train between the two cities passes through the valley of ashes. One afternoon, Nick finds himself in New York with Tom, being dragged to meet his other woman. He is led to the garage of George B. Wilson, a car buyer and seller and is introduced to Mr. Wilson’s wife, Myrtle, also known as Tom’s mistress. Myrtle is a stout, plump woman in her mid-thirties. When Wilson leaves the room for a moment, Tom quickly directs her to get on the next train and meet he and Nick at the station. One they all arrive, along the streets of New York, Myrtle sees a man selling puppies and insists on getting one. They then go to the apartament that Tom has for his affair and decide to invite Catherine, Myrtle’s sister, and their friends, a couple by the last name of McKee, over for a party.

The group find themselves drinking all night to stay entertained. As Carraway converses with Catherine, she mentions that she had recently been to a party at Gatsby’s house and she heard that he was a relative of Kaiser Wilhelm. They begin to talk about Tom and Myrtle, and Catherine reveals to him that, although they act like they love their spouses, the two can not stand them. This explains why the two of them have ended up together, because they are so similar in that sense. When Myrtle hears their conversation, she covers up by explaining that he hasn’t gotten a divorce yet because Daisy is Catholic and does not believe in divorce. This, however, is the lie that Tom has created instead of just telling her the real reason, which is the difference in their social status. The group continues to discuss their youth and marriages until Myrtle begins to tell the story of how she and Tom had met. She tells them that one night, she had been on train to go visit her sister, when she noticed a handsome man.

The whole time, she had been glancing at him, pretending she was looking at the advertisement board above him. In the train station, he stood next to her, with his white shirt pressing against her arm, and she began to joke with him that she would have to call the police. They ended up getting in a taxi together instead of her getting onto another train. By nine-o’clock that night, much of the group had wandered off, returned, and made other plans. An argument between Tom and Mrs. Wilson had initiated about whether or not she was allowed to bring up his wife’s name. She began to chant Daisy’s name and in a quick moment, Tom broke her nose. With bloody towels all over the floor, and women yelling, the party came to an end. A drunken Nick and Mr. McKee leave the party together and discuss having lunch together one day. He later finds himself half-asleep at the Pennsylvania Station waiting for the four-o’clock train to go back home to Long Island. 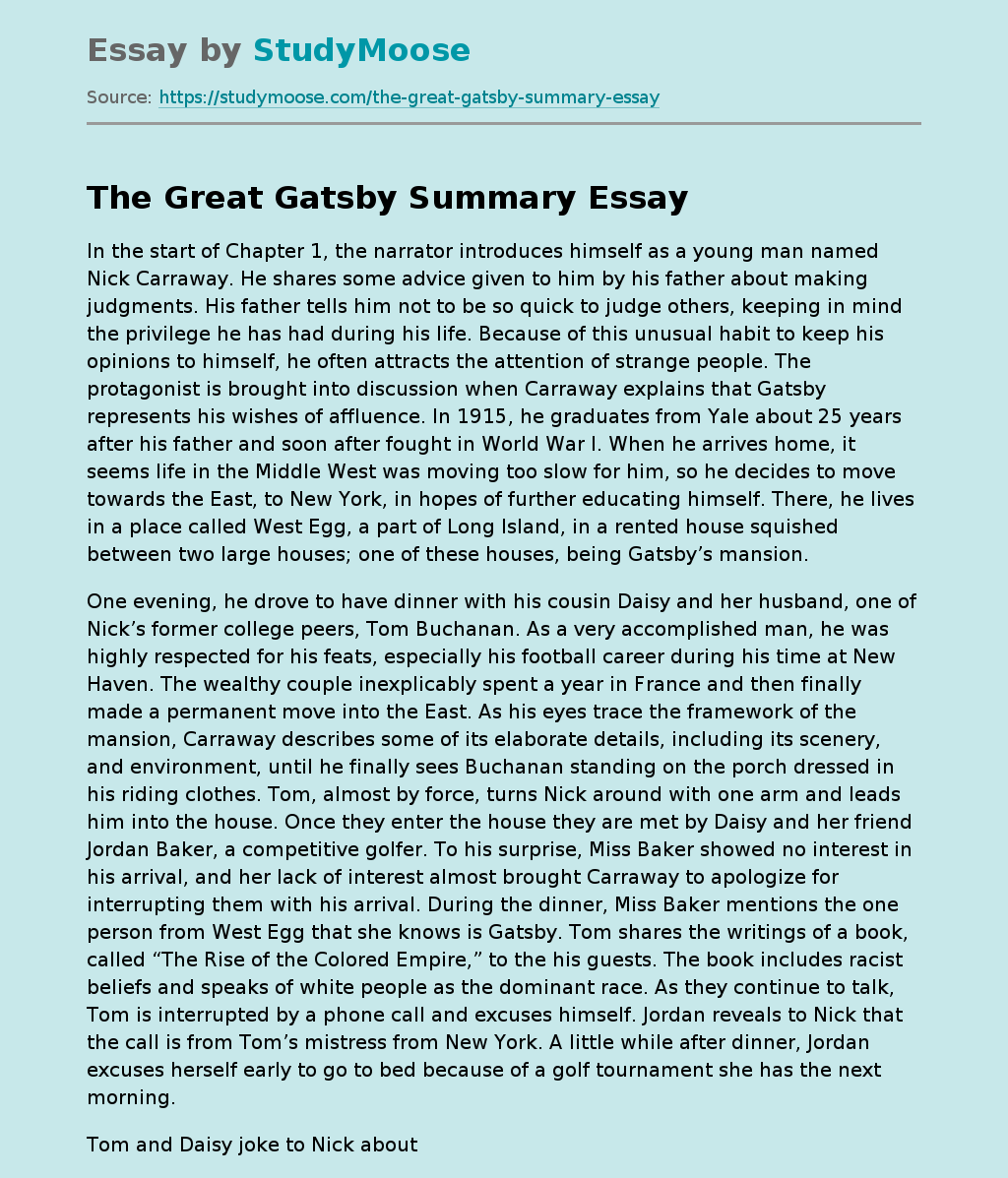