When meeting another person, you never know who they really are because they are probably presenting themselves in a way that does not show their true colors.  In the novel, The Great Gatsby by Scott Fitzgerald, Daisy is a main character whom is not very likeable. Throughout the book her actions show her true colors although she tries to portray herself as innocent and sweet.  Daisy Buchanan is not a noble character. Her whole life as well as all of her decisions revolve around herself as she is very arrogant and self-centered.

Don't use plagiarized sources. Get your custom essay on
“ The Great Gatsby Literary Analysis ”
Get custom paper
NEW! smart matching with writer

She begins to think only of herself and totally ignores everyone and everything around her.  Daisy’s motivation ruins her relationships with Nick and Gatsby. At first Daisy is a very likeable character because she presents herself as very caring, humble, sweet and innocent.  In comparison to people like Tom, Daisy seems like an angel, but Nick soon realizes that she is just as selfish and low as everyone else.

Fitzgerald writes, “Daisy watched him and laughed her sweet exciting laugh; a tiny gust of powder rose from her boson into the air. ‘The rumor is,’ whispered Jordan, ‘that that’s tom’s girl on the telephone’” .  One way that Daisy shows her true colors is the way that she know about her husband’s affair, yet never says anything or does anything about it. She is not just trying to deny the fact her husband is cheating on her, but does not want others to think of her as not good enough for Tom.

Instead of dealing with this issue she turns to Jay Gatsby, a former love interest, for the attention that she is not getting from Tom. Fitzgerald states, “‘He threw dust into your eyes just like he did in Daisy’s but he was a tough one. He ran over Myrtle like you’s run over a dog and never even stopped his car.’ There was nothing I could say, except the one unutterable fact that it wasn’t true”.

As Daisy drives home from New York City she hits Myrtle and does not stop even when Gatsby insists that she must. This truly shows her inconsideration for others, because you can see that she really does not care enough even to help someone she knows she kills. Daisy sees Myrtle as a inferior. She does not see the need to go back and see if she is okay, especially with the possibility that someone would see what she has done.  These actions show that Daisy is not a noble character, but instead lacks honorable traits such as sincerity and empathy for others. Daisy’s main motivation in life is to be sure that everyone knows that she is wealthy and superior.  Even to her own children she wants to be seen as better. Fitzgerald writes, “‘I’m glad it’s a girl. And I hope she’ll be a fool that’s the best thing a girl can be in this world, a beautiful little fool’” .

Daisy pays little attention to anyone, even her own daughter. She sees her child as an object and not a person. She shows little emotion towards her and does not even take care of her, but insteads passes her off to a servant to do all of the work for her as she relaxes and spends time with other social elites.  She thinks nothing of her daughter and just hopes that she will be a fool because she will have nothing else to aspire to be. Fitzgerald explains, “She hesitated. Her eyes fell on Jordan and me with a sort of appeal, as though she realized at last what she was doing and as though she had never, all along, intended doing anything at all. But it was done now. It was too late” .

Although Daisy tells Jay how she has never stopped loving him, she does not leave Tom for him. When she does not tell Tom that she has never loved him, Gatsby is angry because she leads him on. Knowing that she will never leave Tom, she leads Jay Gatsby to believe this is the plan. She can never leave Tom for Gatsby because that would ruin her reputation. Tom has old money while Gatsby has new money, which would make her look bad.  Although Nick and Gatsby are led to believe that she loves Gatsby, Nick later realizes that she was only using him because her own husband was cheating on her with Myrtle and she was not getting the attention she wanted from him. Also, she was using Gatsby to make Tom jealous in order to try and get him to stop seeing Myrtle. Daisy’s motives are always to benefit herself and never for the benefit of others. She will do whatever it takes in order to get things to go her way, no matter who she hurts. Not only does this end up hurting herself, but it affects the people around her and ruins the relationships she has with them.  Nick, Daisy’s cousin, at first thinks highly of Daisy. He thinks that, especially in comparison to Tom, she is not like the others East Egg people.  Nick says, “‘ They’re a rotten crowd’… ‘You’re worth the whole damn bunch put together’” .

After spending more and more time with Daisy, he realizes that she is just like everyone else, whom he hated.  He feels bad for Gatsby because he never realizes how terrible she really is and he will never know that. Not only does her arrogance ruin her relation with her cousin, but also with Jay Gatsby who loves her. Fitzgerald includes, “‘Was Daisy driving?’ ‘Yes’ ‘but of course I’ll say I was’”.  After killing Myrtle, Daisy does not stand up for Gatsby as he becomes the one blamed for Myrtle’s death. She allows Tom to spread the rumour that Gatsby is the murderer even though she knows it was her. Because the blame is put on Gatsby, Myrtle’s husband kills George and Tom makes Myrtle leave town with him.  Due to Daisy’s need for everything to be all about her or benefit her all the time many relationships are broken causing her to have a very sad and lonely life. In conclusion, Daisy is not a noble character, but instead lacks honorable traits causing her to be very arrogant and self-centered.  Due to her lack in honorable traits the people around her are affected, for example many relationships are broken and even a life is taken do to her apathy.  Due to these attributes of her character, Daisy lives an empty life full of loneliness because she struggles with feeling as if she is superior to everyone else and her life is the only one that matters. 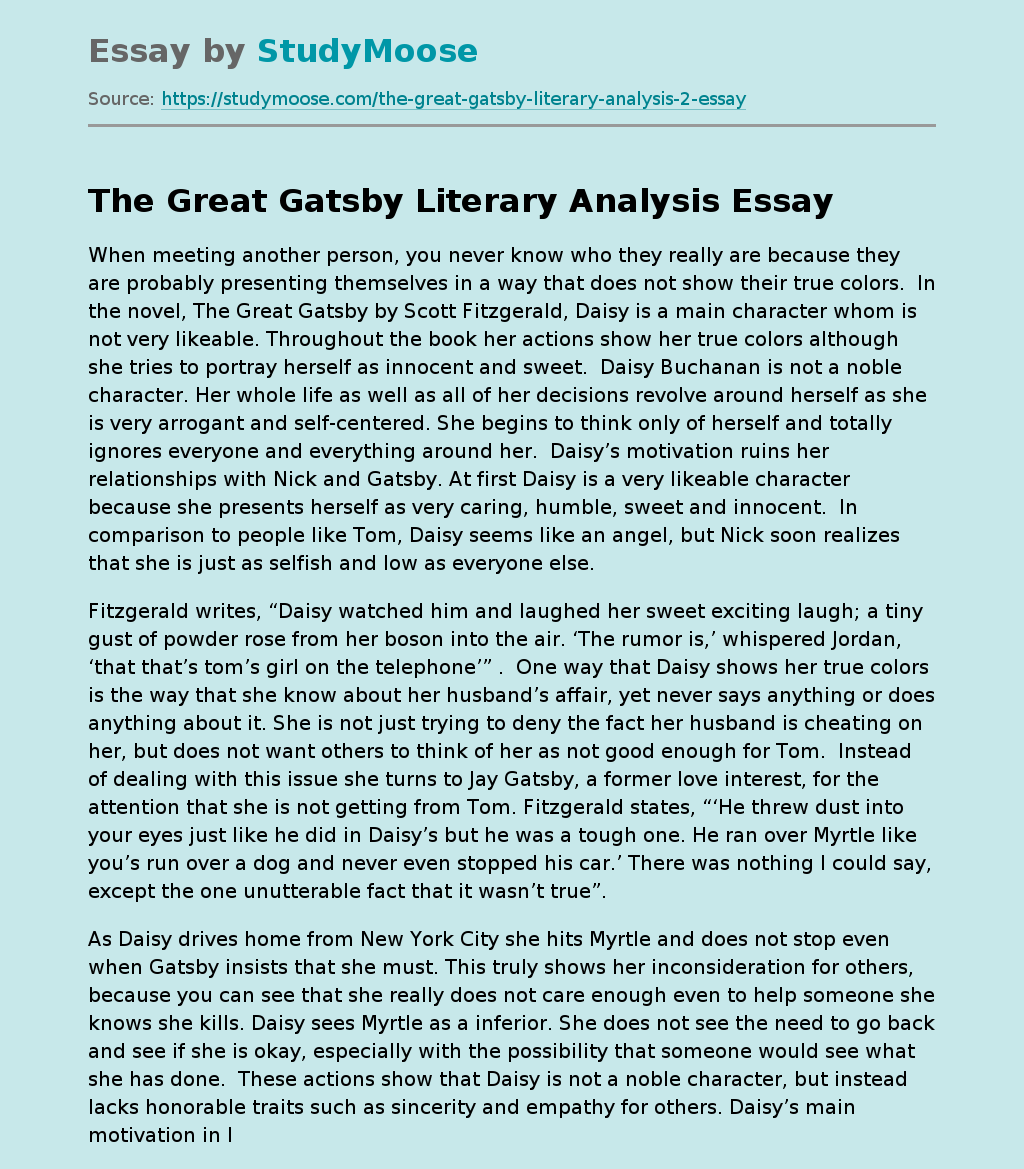