'The Great Gatsby’ and ‘Atonement’ Analysis

Not only does the idea of money being the most important factor in life means one’s partner comes second, it additionally solidities one’s class, meaning families are separated just by the amount of money they have to their names. Fitzgerald illustrates the theme of doomed love with the relationship of Tom Buchanan and Myrtle Wilson, Tom, powerfully built and hailing from a socially solid old family yet associating with Myrtle, whose lifeless husband George owns a run-down garage in the valley of ashes, representing two extreme classes.

Don't use plagiarized sources. Get your custom essay on
“ ‘The Great Gatsby’ and ‘Atonement’ Analysis ”
Get custom paper
NEW! smart matching with writer

McEwan reinforces this theme in the relationship between Robbie Turner and Cecilia Tallis, Robbie a gardener and Cecilia the daughter of the ministry-employed and wealthy Jack Tallis are also partitioned by class. Consequently, relationships in both novels are doubtlessly doomed due to the impenetrable barriers of class and wealth. Throughout the novel, this theme is reinforced as we discover a consistent number of tragedies in the majority of relationships.

The idea of Gatsby’s and Daisy’s relationship being inevitably doomed is emphasized with the Gatsby using the abstract noun ‘passion’ showing the obsession he has with Daisy, highlighting the idea of a Romeo and Juliet relationship, one being so in love that it is bound to end in tragedy.

Additionally, Fitzgerald illuminates doomed love with symbolism describing the portrait of Dan Cody, a man who mirrors the average man in the American soceity as a ‘florid man with a hard, empty face’ which reflects the hollowness of people and their materialistic views; they solely focus on their wealth over relationships.

McEwan reflects such demeanour in Briony Tallis’ story ‘The Princess was well aware of his remorseless wickedness, but that made it no easier to overcome the voluminous love she felt in her heart for Sir Romulus’ again initiating the predicament of unconditional love. This is obviously bound to end in disaster when such dispute, such as class separation and the ‘importance’ of money is involved in the relationship which reflects Fitzgerald’s relationship of Gatsby and Daisy where Gatsby is unbelievably in love with Daisy and yet we know she does not feel quite the same way, again initiating disaster.

Symbolism, a feature Fitzgerald continuously employs for the duration of ‘The Great Gatsby’ additionally emphasizes the theme of doomed loved. Previous to Daisy’s arrival in Chapter Four, Gatsby exclaimed a few minutes before she was due to arrive that ‘Nobody’s coming to tea. It’s too late! ’ and that he ‘can’t wait all day’, this is a very ironic statement, firstly for the fact he says ‘nobody’s coming’ as we know that Daisy really never does return into Gatsby’s life as he wishes she will and secondly that he says ‘it’s too late! and yet he’s waited five years to  see Daisy. Furthermore, when Gatsby and Daisy first sit down together, ‘the clock took this moment to tilt dangerously at the pressure of his head’ which symbolises the idea of time being a very important theme, the adverb ‘dangerously’ clearly highlighting how precarious the desire to recapture the past really is. The idea that when the clock fell off the mantelpiece, it stopped, symbolises Gatsby’s life, frozen in time, he believing everything between him and Daisy will be exactly as it was, five years before.

Fitzgerald carries on using symbolism behind all issues in the novel, after the tragic death of Gatsby, Tom Buchanan and Daisy Fay flee to a new house far away rather than condescend to attend Gatsby’s funeral, ‘They were careless people, Tom and Daisy–they smashed up things’ again mirroring the hollowness of people and the hedonistic attitudes they have to life; all they care about is themselves, nobody else’s feelings and so this is an additional important factor to why relationships end up in pieces.

Furthermore, ‘the green light’ is another important symbol in ‘The Great Gatsby’ representing Gatsby’s hopes and dreams for the future. In Chapter One, ‘he stretched out his arms towards a single green light’ as a guiding light to lead him to his goal: Daisy and yet at the end of the novel, we realise his dream was one stuck in the past, impossible to achieve, although Nick as the retrospective narrator observes, the light does still continue to shine one, symbolising hope for the rest of us and yet so much doom for Gatsby and Daisy and the love between them.

The prominent theme of doomed love is additionally supported by McEwan’s fragmented structure of the novel symbolising the broken hearts of Robbie Turner and Cecilia Tallis which is mirrored in Nick’s unreliable narrative voice. An obsession with materialism reflects the hollowness of the people of 1920s America, Gatsby reinforces this object-orientated focus when he cries ‘she only married you because I was poor and she was tired waiting for me’, obviously highlighting that the only reason Daisy was to marry was for money, not the fact she loved thus illuminating doomed love as the relationship is based on money and materialism.

Fitzgerald uses wealth imagery to describe Daisy ‘Her voice is full of money’ symbolising the need for money as a support for her own personality. Kevin Rea writes ‘the sense of hope conveyed by yellow is still present in the light and music. But the fact ‘the earth lurches away from the sun’ hints at the transient powers wealth bestows’’ which again illuminates the theme of money being so important, yet underneath it only leads to disaster in relationships in the novel again initiating the theme of doomed love. Incredibly, Gatsby himself is one factor of his own relationship with Daisy being so doomed.

Blinded by the astronomic amount of love he has for her, Gatsby states ‘Can’t repeat the past?… Why of course you can! ’, emphasizing the unachievable expectations he has, all he wants to do is regress to five years before and reunite perfectly with his ‘love’, but coincidently we know this is quite the opposite of what happens. Furthermore Gatsby wants something of Daisy that she can’t give, an unachievable statement, for her to ‘just tell him the truth, that you never loved him and it’s all wiped out forever’ about Tom, but we know this can’t happen as Daisy’s love for Tom was once real and strong as narrated in Jordan’s vignette.

Fitzgerald uses an abundance of pathetic fallacy throughout the novel in coordination with the theme of doomed love. Gatsby and Daisy’s first meeting seems particularly awkward which reflects the weather, ‘pouring…small muddy swamps and prehistoric marshes’ reinforcing the mood. Additionally, as Gatsby and Daisy began to ‘click’ and ‘bond’ the ‘sun shone again’ initiating an optimistic and joyful mood. Sorrow returns at the tragic funeral of Gatsby along with the miserable weather, ‘thick drizzle’, ‘rain poured down his thick glasses’ showing doom in any love between him and Daisy.

Likewise, McEwan uses pathetic fallacy, Leon asks Cecelia if ‘the hot weather’ makes her behave badly, this weather reflecting the difficulties between Robbie and Cecelia, the weather a hindrance, an obstruction, a way of creating misery in one’s life, mirroring Briony Tallis’ role in ‘Atonement’ and how she destroys and completely gets in the way of the relationship, consequently illuminating the theme of doomed love and reflecting ‘The Great Gatsby’ in the way Gatsby is an obstruction with his own affiliation with Daisy Fay.

As we begin to draw close to the end of ‘The Great Gatsby’, we come across the reunited relationship of Daisy and Tom ‘sitting opposite each other’. Fitzgerald describes the couple ‘they weren’t happy…and yet they weren’t unhappy either’ mirroring the people of 1920s America, in the Jazz Age, as Gertrude Stein stated they were ‘the lost generation’ and had no real point to life and so lived unhappily, happily.

Although this image of the two sitting together not showing compassion or love could represent doomed love, some could alternatively say that this relationship, which looked doomed at the start, is now the only good, strong one left, contradicting the theme. Mike Peters writes ‘not only Gatsby, but several of the other characters remain enigmas’, showing mysteriousness to the characters in Fitzgerald’s ‘The Great Gatsby’, maybe Gatsby did only love Daisy for the money or maybe Daisy never loved Tom?

None of us can know, excluding Fitzgerald, we have no final conclusions to draw. However, it is clear that in the heartless and materialism obsessed society that Fitzgerald creates, it is only the most corrupt relationship that survives at the end. To finally conclude, Fitzgerald’s ‘The Great Gatsby’ leaves us with nothing but disappointment, which shows contrast to McEwan’s ‘Atonement’ which then leaves us with the possibility of hope and faith.

Fitzgerald leaves us with sadness and we feel sympathy for the characters in the book, they all seem lost and seeking for something and yet the only solution they discover is money, highlighting again the theme of doomed love, money before love. The death of Myrtle Wilson devastates hers and George’s relationship which is obviously the result of her materialistic values and her longing for Tom’s money, her main focus in a man was his money, this is highlighted when she says that ‘’Oh, is that your suit? ‘ I said. ‘This is the first I ever heard about it. But I gave it to him and then I lay down and cried to beat the band all afternoon” reinforcing the idea that wealth is of huge importance to her. Gatsby obviously dead and Tom and Daisy reunited, but only on the thread of a string, all these sorrows as a result of money and class partition. Additionally, the death of Robbie Turner in ‘Atonement’ is the result of class partitioning and so is also highlighting the theme of doomed love, a major theme in both F. Scott. Fitzgerald’s ‘The Great Gatsby’ and Ian McEwan’s ‘Atonement’.

'The Great Gatsby’ and ‘Atonement’ Analysis. (2018, Aug 30). Retrieved from http://studymoose.com/the-great-gatsby-and-atonement-analysis-essay 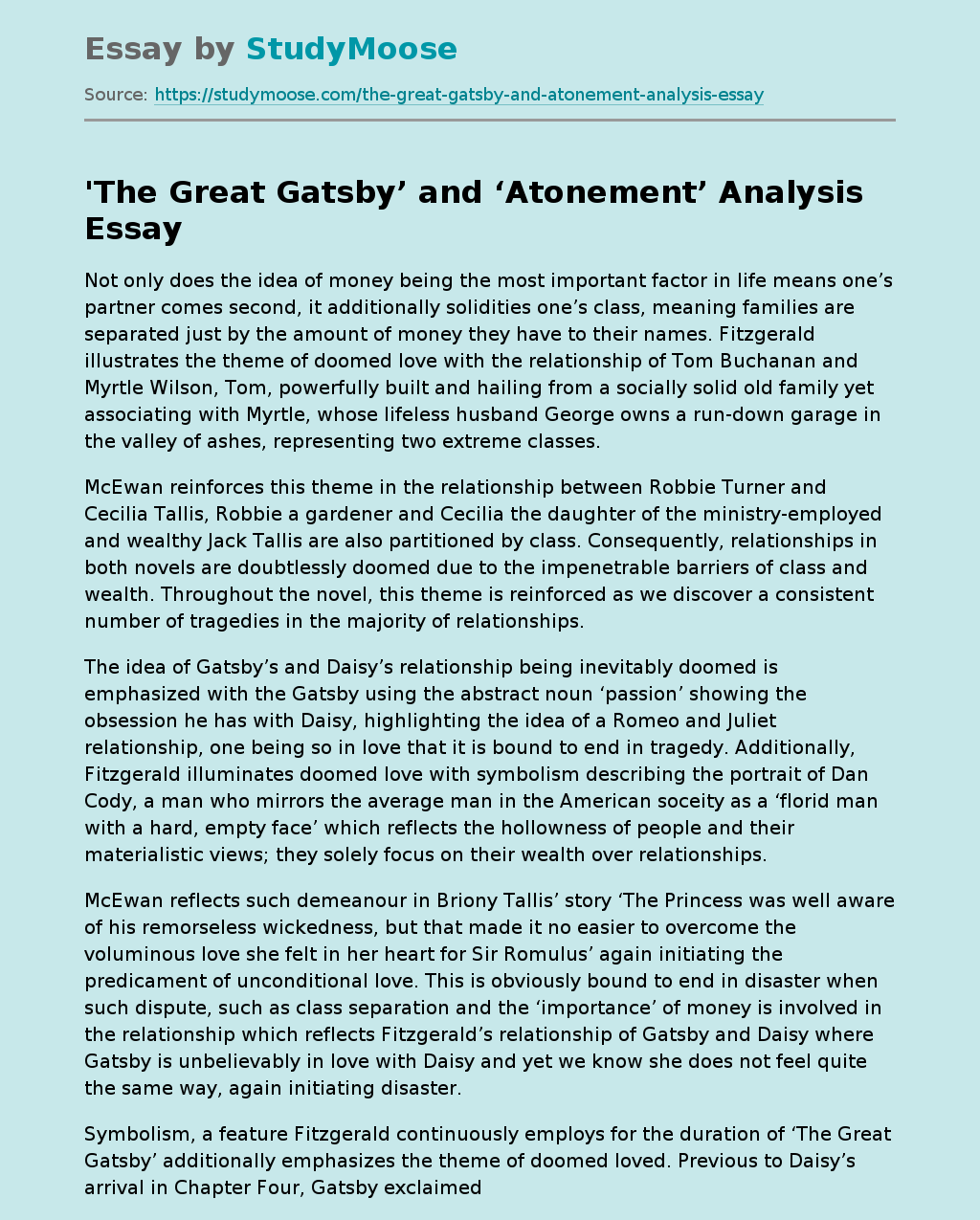