The year is 1922 in Long Island, New York. Everyone is driving to achieve their “American Dream” after World War I ended. The American dream is supposed to stand for independence and your ability to create something of yourself with your own hard work. In this story, it seems like it turned to more materialism and selfish pursuit of pleasure. The theme of the Great Gatsby doesn’t show you what the American dream was supposedly like. The Great Gatsby shows the “American Dream” is no longer a vision about building a life; it’s about getting rich.

Don't use plagiarized sources. Get your custom essay on
“ The Great Gatsby: Analytical Essay ”
Get custom paper
NEW! smart matching with writer

Although The Great Gatsby by F. Scott Fitzgerald is a fictional novel it still portrays a life real people could have possibly lived during the era of the “Roaring 20’s”. Our main character telling the story is Nick Carraway who moves to Long Island, New York to pursuit his idea of the American Dream. After Nick moves into his new cottage on the West Egg, he discovered his neighbor threw these magnificent parties in his mansion yet he had no idea who he was.

Nick, being intrigued on who his mysterious neighbor was, tries to discover his secret identity and past life. Nick ends up meeting Jay Gatsby, who is better known as ‘Gatsby’ in this story.

While this story progresses, so does the theme of the American Dream. The theme pops in and out of the chapters but it doesn’t fully show until you’re towards the end of the story. Gatsby symbolized the corrupted American dream.

The view of wealth as the solution to problems and pursuing money in shady schemes occurs throughout the story through Gatsby all due to his action of reinventing himself to the point he becomes disconnected from his past. All of Gatsby’s motivation for his corrupted dream of wealth is connected to his honorable love for Daisy Buchanan who lived on the East Egg (rich-class neighborhood) . In the story Gatsby goes on to say: ”Her voice is full of money,’ he said suddenly. That was it. I’d never understood before. It was full of money—that was the inexhaustible charm that rose and fell in it, the jingle of it, the cymbals’ song of it.” (7.99) Now, as for a voice of money, what does it really mean? The main point of that saying is that money is not something you can separate from your body. If you’re born with money you are actually born with the money. Everyone know’s Gatsby is faking it by the way he acts in this story. In chapter 4, Gatsby actually proceeds to tell Nick his life story in hoping for approval of Nick as his friend. “James Gatz – that was really, or at least legally, his name. He had changed it at the age of seventeen and at the specific moment that witnessed the beginning of his career — when he saw Dan Cody’s yacht drop anchor over the most insidious flat on Lake Superior,” (4.6) Gatsby has been faking his past for the approval of others. That shows true dissatisfaction in his life, but why did Gatsby make that decision in the first place? Gatsby was actually from a poor family. He built his wealth through illegal ways and was never honest about it. So you could say that Gatsby had felt like if he was rich he could get daisy to love him, so he built his wealth and created an image of himself anyone could fall in love with because he wanted to be accepted by the rich and of course, Daisy herself.

Something equally important to the theme of the American dream in this story is the Valley of Ashes. This setting was considered the “poor” and “depressing” industrial area of Queens, New York which was between the West Egg and Manhattan. Poverty lived here and it was well known. “This is a valley of ashes—a fantastic farm where ashes grow like wheat into ridges and hills and grotesque gardens; where ashes take the forms of houses and chimneys and rising smoke and, finally, with a transcendent effort, of men who move dimly and already crumbling through the powdery air,” (2.1) The Valley of Ashes is important because it illustrates the consequences of America’s obsession with wealth. The residents in this low-class area represent the hard factory workers who tried to pursue their dream of success through honest hard work but ended up no where. It also displays the moral and social decay that results from the reckless pursuit of wealth, as the rich society indulge themselves without consideration for nothing but their own pleasure. The Valley of Ashes also symbolizes the predicament of the poor, like George Wilson, who lives among the grimy ashes and those who lose their liveliness as a result. The Valley of Ashes stands for the forgotten “poor underclass” Americans. While reading the story, you can gather that the Valley represents hopelessness and a prison that’s impossible to escape due to poor conditions. Those two points show that the lower-class citizens that inhabit that area don’t receive the equal opportunity to achieve their “American Dream” of success.

The last key point to prove the failure of the American dream in this story is the Eyes of T.J Eckelburg. Chapter 2 states: ‘The eyes of Doctor T. J. Eckleburg are blue and gigantic—their retinas are one yard high. They look out of no face, but, instead, from a pair of enormous yellow spectacles which pass over a nonexistent nose’ (2.2). This highlights the extremity of the failure of the American Dream. God is watching over the Valley of Ashes which is the same area T.J Eckelburg’s eyes are located. The fact is, the American dream is continuously failing and all of it indicates that God can’t even help the citizens in this area and it emphasizes the impossibility of the success of the American Dream in this novel. Simply the American Dream is the ideal that every citizen has the same equal opportunities to achieve success and prosperity through hard work and determination. The wealthy in this story did not achieve their success through honest and hard work. Gatsby is the main example of how this came to be through his lies and dishonest work throughout the story. Ultimately, the novel portrays the American Dream was really never about building a successful life; everyone wanted to be rich for their own selfish desires and acceptance. 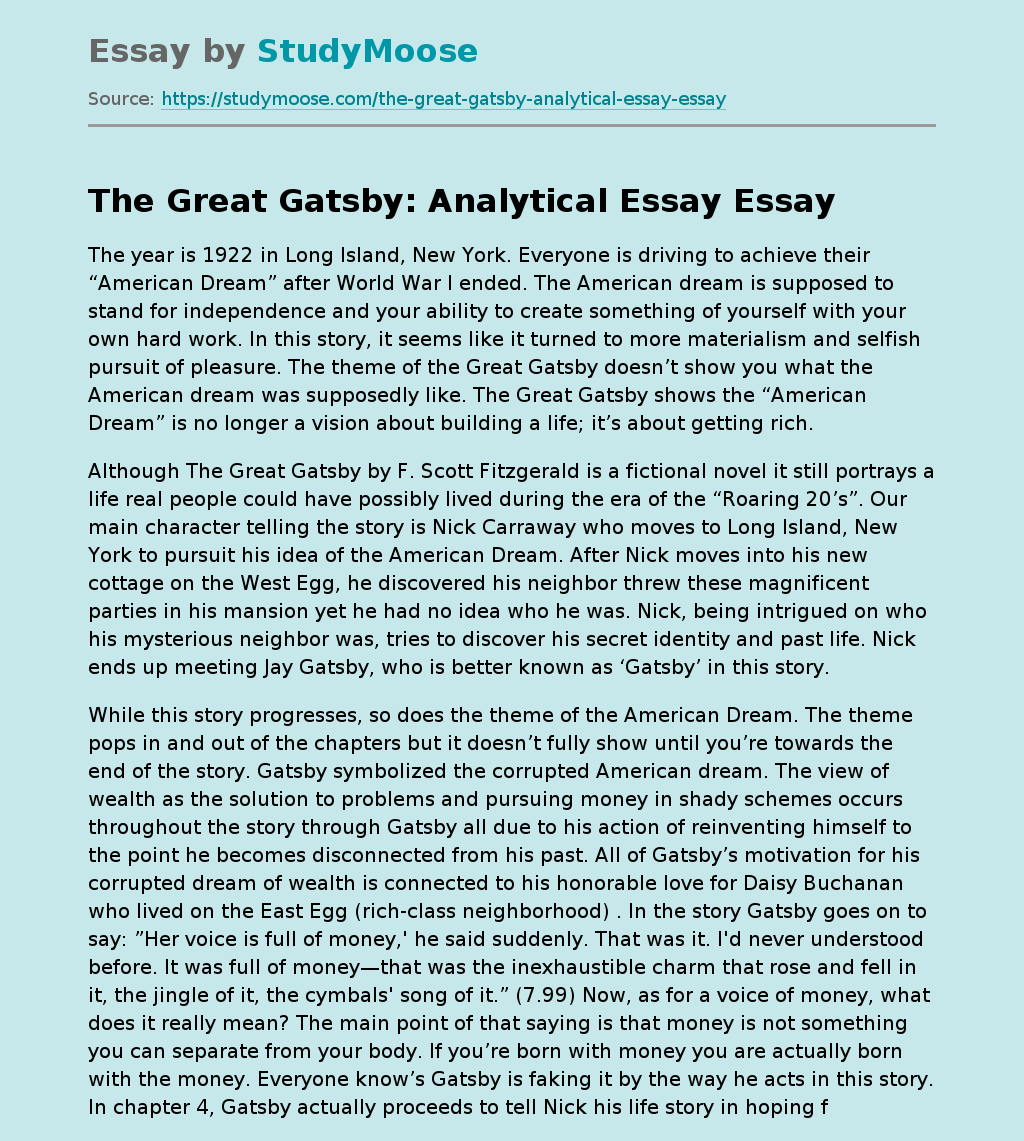