“Agatha Christie, a woman who is recognized as one of the best female crime & mystery novel writers of all time”. This introduction provides reasoning to prove that this is true through the explanation of her strong characters, her interesting settings, and her strong display of morality. The writer does a good job in avoiding facts, keeping the thesis mainly opinionated. In the body of the essay, I believe it could have been rearranged in order to have more of an effect on the reader.

Don't use plagiarized sources. Get your custom essay on
“ The Great Female Novelist Agatha Christie ”
Get custom paper
NEW! smart matching with writer

in body paragraph one, the writer gives a brief explanation of the strong characters Agatha Christie created.

The last body paragraph on Agatha Christie’s morality is an effective way to end this essays argument.

This gives the reader a look at the “Why’s and how’s” of Agatha Christie’s world and her passion behind writing these types of novels. The essay writer avoids just reusing her major arguments in her essay; by simply paraphrasing she effectively includes the important ideas of her essay into her conclusion. Although this essay could be slightly proved upon, it was a effective example of highlighting stylistic writings of the great female novelist Agatha Christie.

The Enduring Appeal of Agatha Christie Who does not enjoy a good mystery story?

Popular literature abounds with examples, ranging from the controversial work of Dan Brown to the horrific work of Stephen King. This genre, rooted in the Victorian tradition of Edgar Allen Poe, Wilkie Collins, and Arthur Conan Doyles, certainly has a wide following. On the beach, on the subway, people escape into the world of these authors. Although many female writers claim to be the “Queen of Crime Fiction”, it is really Agatha Christie against whom all others are measured.

Even many years after her death, readers appreciate Agatha Christie’s novels ecause of her strong characters, her interesting settings, and her strong morality. Next to Sherlock Holmes, Hercule Poirot and Miss Jane Marple are two of the most recognizable detectives in fiction because of their distinctive attributes. Hercule Poirot, the Belgian detective, is noted for moustaches and his “egg-shaped head”. From the rather violent village of St. Mary Mead, Miss Jane Marple is known for knitting needles. A third detective, Ariadne Oliver, is an author with a fondness for apples.

Interestingly, the last character is also thought to be Christie’s alter ego. Through her characters, Christie is able to express her own views on the social issues of her time. Ariadne Oliver, Poirot, and Miss Marple live in time and a world that has changed drastically and perhaps that is why the world of Agatha Christie is so interesting to us till: nostalgia. Although she is from a small village, Miss Marple seems to get around a great deal. In one adventure, she is convalescing in the Barbados when a murderer strikes in the resort where she is staying.

Poirot and Ariadne Oliver can be found in small villages, London, and exotic settings in the Middle East. Despite their varied locales, the common element that runs through Christie’s novel is the “closed” society. These worlds are cut off culturally, economically, or physically, as in the case of Ten Little Indians, which is set on an island off the Devon coast. Poirot’s world is largely that of the upper classes, but considering the number of bodies found in stately country homes, they can be rather dangerous group to cross!

The time is never specified, but a vague period between World War I and World War II is often favoured. Indeed, when in some of Christie’s later novels like Passenger to Frankfurt or Toward Zero, Christie uses the time period of the 60’s, the novels do not quite ring true. Vintage Agatha Christie harkens back to a more innocent time, although perhaps a more murderous one! Time and fashion may change in Christie’s world, but Christie’s moral stance stays firm. Through Christie’s novels, we can gain insight into the morality of the early 20th century, which still might have some resonance.

In Christie’s world, murderers are punished by hanging. Even the gentle Miss Marple states in one novel that she feels it only right that a cold-blooded murder should be executed. Poirot favours capital punishment as well, expressing the view that it is more humane than putting a person in a small jail cell for life. Divorce is frowned on in Christie’s novels. After Christie’s first marriage to an RAF officer ended in divorce when he left her for another woman, Christie’s wrote several novels in which retired air force officers tended to be the villains!

Christie’s morality, along with her setting and characters, give her novels a staying power that has certainly not been matched by anyone writing in the genre today. In practically any bookshop, airport newsstand or train station, it is possible to buy a Christie novel. Hers is a world of moral certainty: the victim will be avenged, the guilty will be punished, and in the end, the natural order of world, upset by murder, will be restored. Perhaps it is this restoration of order that gives the modern such comfort in these uncertain times. 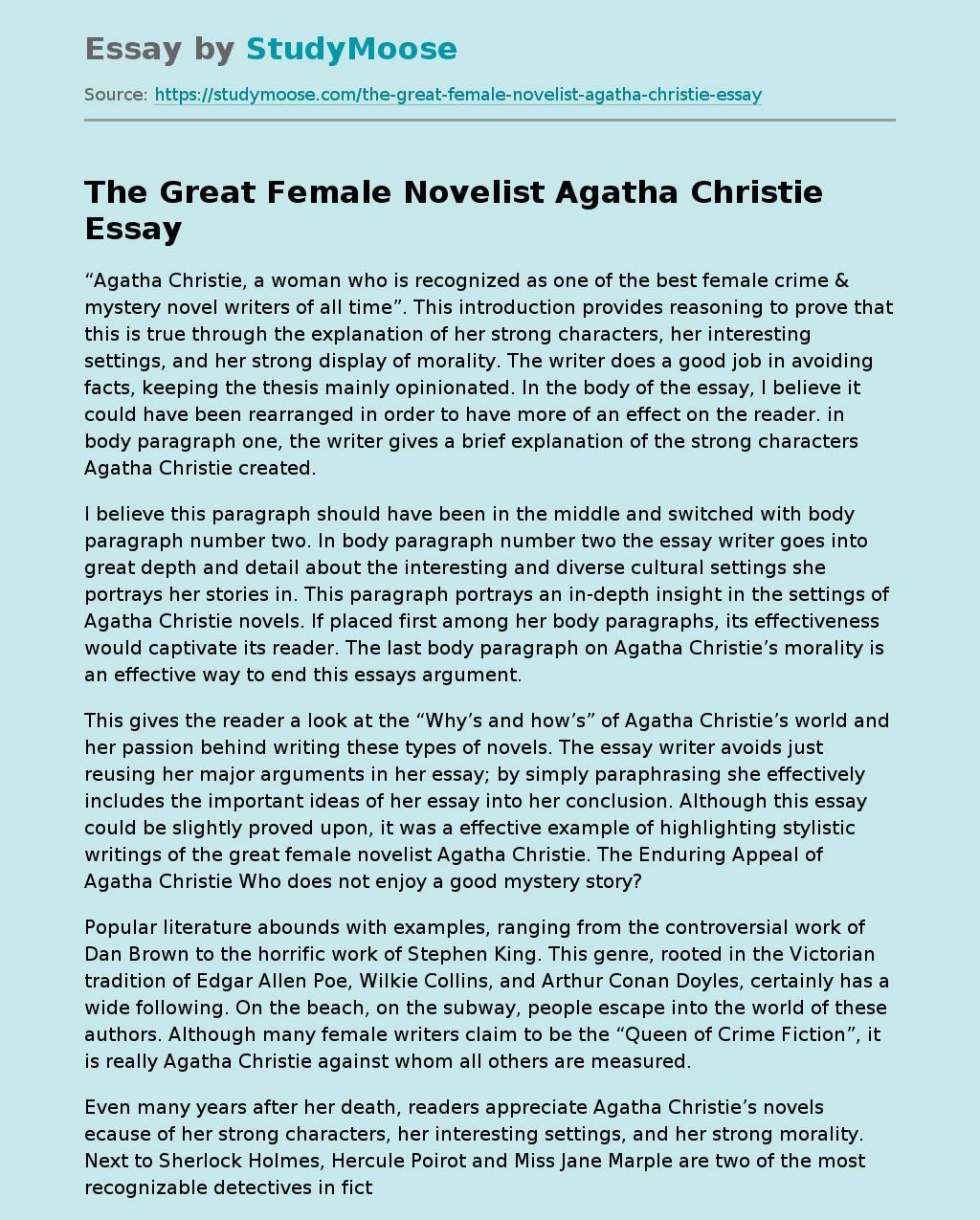