The Grapes of Wrath: Good vs Evil

The Grapes of Wrath is a novel about the Dust Bowl migration in the harsh times of the Great Depression. It is the story of one Oklahoma farm family, the Joads, and it is also the story of thousands of similar men and women. The Joads are forced off their land, so they move West to California. When they reach California, they are faced with the harsh reality that it is not the Promised Land that they hoped in a beginning.

Don't use plagiarized sources. Get your custom essay on
“ The Grapes of Wrath: Good vs Evil ”
Get custom paper
NEW! smart matching with writer

Steinbeck’s purpose in writing The Grapes of Wrath was to inform the public the migrants’ difficult situation hoping that it would cause social change. Steinbeck employs the theme of the rich versus the poor to accomplish his purpose. It is a classic conflict between good, portrayed by the poor, and evil, portrayed by the rich. One of the ironies of Steinbeck’s novel, The Grapes of Wrath was that, as Ma Joad said, “If you’re in trouble or hurt or need — go to poor people.

” The irony is that if you need something you have to go to the people who have almost nothing. And the poor people in this book are shown as the good people because of their generosity, their family union, their humbleness, and most importantly, their connection with God. In the other hand, there are the evil people, known as the rich; and the reason they are portrayed as the bad people is because of their selfishness, bad temper, their greedy nature, and their desire to get rid of the migrants in California.

One, and I think the best example of the struggle between good and evil was that in the novel, as well as in the real life back in the 30’s, the bankers took all they could from the farmers and then when they could give no more they were kicked out of their homes, making the Joad family move to California; but somehow, thanks to this evil act, the Joads could move forward with their lives, and this majestic book was born thanks to that and also by the Great Depression.

Later on in the story there are so many examples of generosity as well as evilness. One example of generosity is in at the truck station in chapter 15 when the restaurant owner and waitress give the family bread at a discounted rate, and candy two for a penny when it is actually nickel candy. The truck drivers then leave large tips to the waitress. Neither the truck driver nor the restaurant owner and waitress are very rich but they are generous anyway. In contrast to that, the novel also shows an example of evilness, as

when the Californians tell the Joads “Okies”, which means scum, and they wanted to get rid of them because they feared that the migrants would steal their jobs, and the Californians started riots and many other things in order to get them off their land, this seems really bad, and evil, but I have to admit that somehow that was the right thing to do, not the riots, but the desire to get rid of them because not everyone had jobs in that time period, and the ones who do, fought in order to keep it to earn money and raise their families.

However, there were also signs of generosity in the story, as in chapter seventeen the person at the car dump gives Tom and Al things for way discounted rates. Ma Joad is also an example of this. The Joads are poor and yet they give what little they have to the children who need it. These acts of generosity are contrasted to how the rich people are trying to rip off the migrants. Another example of evilness is in chapter seven, that shows how the car dealer rip the people off by selling them pieces of junk for high prices.

Chapters nineteen, twenty-one, and twenty-five are general chapters that show how the large land owners are cheating the migrants and smaller land owners to make a larger profit. They show how the land owners hire guards and lowered the wages to break their spirit and keep them from organizing. These are just facts that I remember from the story, but there are a lot more in it, which I am sure that are even better in the case of good, and worse, talking about evil.

To conclude, I would like to say that this world is full of generosity as well as evilness, it is something like fifty-fifty, but we, the good people cannot do anything about it, well, we can encourage the people to do good things, but we cannot force them, and that is the problem that affects the world we live in now, and the world in the time when the book The Grapes Of Wrath was written, but at the end of every story, the good beats the evil, and the Joads lived happily ever after, although they were still struggling with their economic issue, some life problems, they dealt with death of Grandpa and Grandma, but somehow they managed to live a harmonious life.

The Grapes of Wrath: Good vs Evil. (2021, Nov 12). Retrieved from https://studymoose.com/the-grapes-of-wrath-good-vs-evil-essay 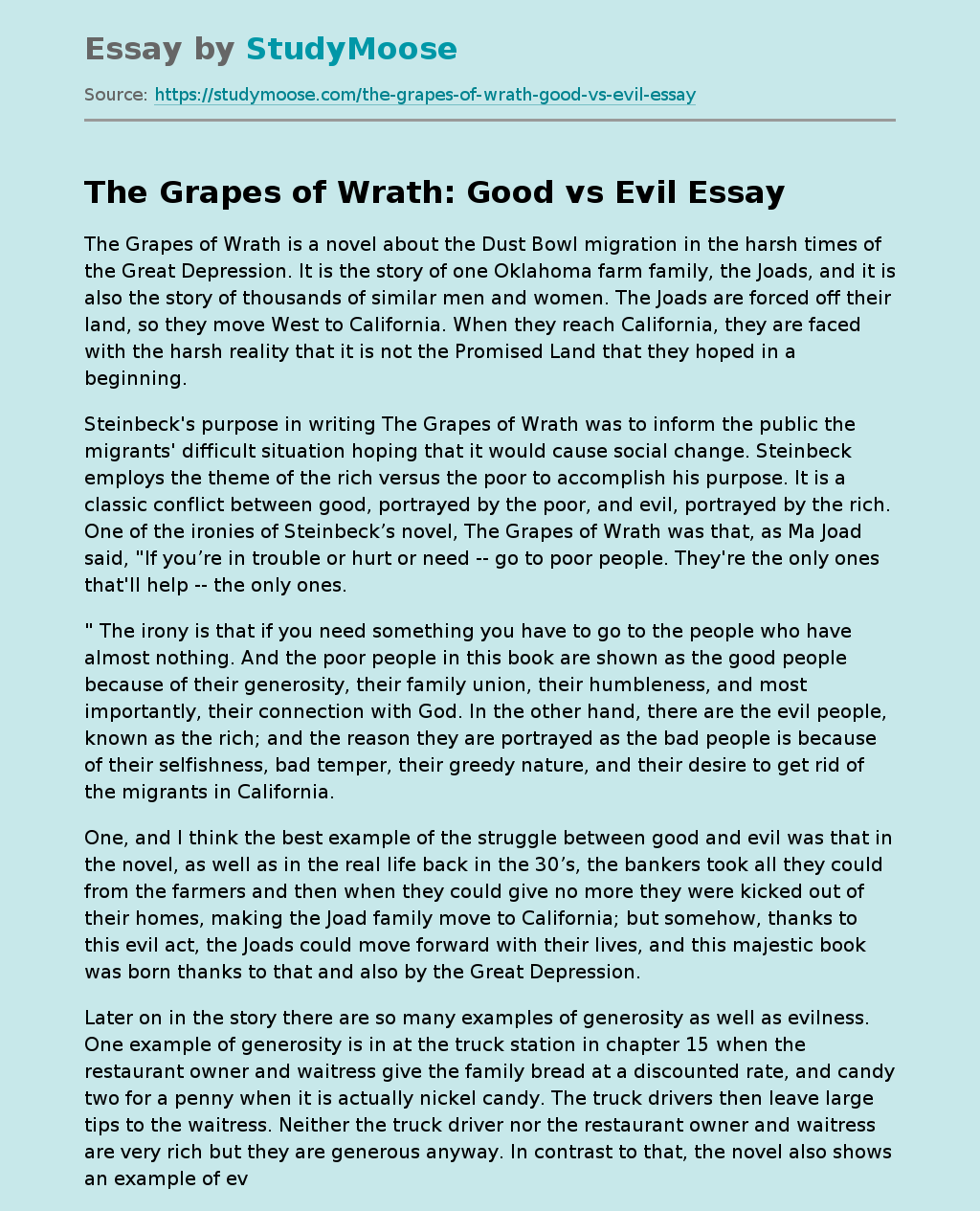