The gilded age is where America’s wealth and industrialization soared, not only the growth of Americas society but the influx of millions of immigrants.

Don't use plagiarized sources. Get your custom essay on
“ The Gilded Age: America’s Wealth and Industrialization ”
Get custom paper
NEW! smart matching with writer

Although it was an economic boom it consisted of a more (EVIL) side: the gilded age was the period were greedy individuals and corrupted corporations had no laws containing their operations. A lot of that consisted of the rich (EXPLOIT) the working class for their personal gain. In fact, these certain corporations or tycoons held more political power and influence than politicians. The gilded age consisted of three major issues that later led to the progressive era: corruption, monopolies, and abuse of workers.

The word corruption in the gilded age is an understatement. Political machines flourished in keeping which party and politicians in power. Many voters were bribed to ensure (SAFETY). Majority of the voters were the incoming immigrants that were severely gratitude through these political machines. Due to the corruption a lot of monopolies were created in making the rich even richer.

Monopolies were the money makers for two main individuals Rockefeller and Carnegie. Before laws were introduced for the harsh labor conditions, these men exploited the system and became extremely rich.

Rockefeller monopolized the oil industry and Carnegie the steel. Although monopolizing these industries made these men very rich the working class within their factories were compensated very little under harsh labor hours.

In the gilded age, there was no safety regulations or labor work laws. The workers were severely underpaid and could barely support their families to live. With the progressive party on the rise and journalism sharing light on such harsh conditions the gilded age was coming to an end initiating the progressive era.

In response to the gilded age, the progressive era was the attempt of the progressive reformers brings change to America’s society. Its main purpose was to eliminate such issues endured through corruption, monopolies, and abuse of the workers. Writers exposed corruption, laws forbid monopolies and gave voters more power in selecting their political candidates. It ended corruption through presidents Garfield attempt to end the spoils system, antitrust act, 17th amendment, muckrakers. (TALK ABOUT THESE)

Garfield’s term in office was short lived due to his assassination but following his death due to him not offering the assassin a job the Pendleton civil service reform act was founded overall putting a halt on the spoils system that position within the federal government shall be awarded by (MERIT) rather than political party affiliation.

The Sherman Antitrust Act was the heavy hitter on suspending monopolistic practices. Through this act, it would regulate fair competition and benefit the consumer at a reasonable price rather than one supplier charging an extreme amount.

Muckrakers were pivotal in seeking out corrupt officials and criminal acts. A fou ous book was written by Upton Sinclair “the Jungle” was a monumental insight into the abuse of workers and the conditions within a meat packing factory. Following the publication of this book, new food safety laws were enforced. Many organizations followed short such as the FDA and FSIS. Saying that the public grew restless and laws were inducted to make sure such conditions and labor laws would be regulated overall showing how the gilded age influenced the progressivism era. 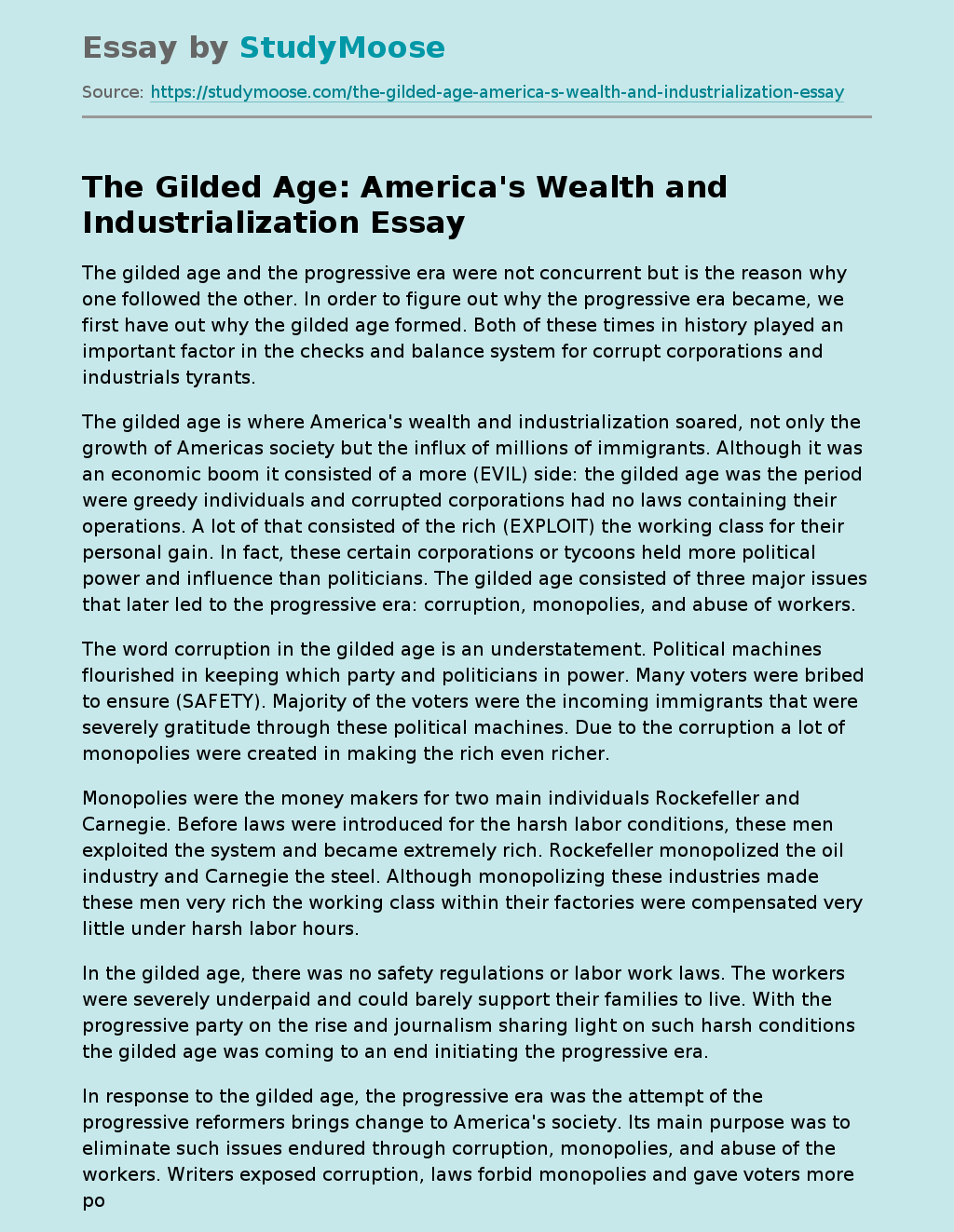