The Ghost Road by Par Barker

Throughout the book “The Ghost Road” by Par Barker, we follow the main character Billy Prior through a series of events. Billy Prior is a young soldier who was fighting in World War I for England, who is also trying to figure out his own sexuality. Through most of the story, we are going and forth with medical boards and Dr. Rivers about returning to the front line. And continuing the war. Prior is continuously fighting to return to his men even though he has been sent home from line three different times for trench fever, shell shock, and asthma.

Don't use plagiarized sources. Get your custom essay on
“ The Ghost Road by Par Barker ”
Get custom paper
NEW! smart matching with writer

He feels as if he needs to see the war through and do his part, but if he knew that he was going to die in the war would he have kept fighting to return?

Through some sort of good luck Billy Prior has survived every time he was on the front line except for the last, men dropped every minute, and most were lucky if they returned once from the front line, but Billy Prior was able to return a fourth time.

In a way, this makes me question if he felt as if he had nothing more to live for, he couldn’t be himself because being gay in 1914-1918 was frowned upon especially in the military, or if maybe he felt as if he had no other purpose in life. He joined the military against his family’s will, his family was of higher class and believed that they did not need to participate in war, Prior thought otherwise.

He also had a fiance Sarah, who he truly seemed to love in a way (even though he slept with other people while still engaged to her), it did seem as if he had a special place in his heart for her. Their relationship was more on the complicated side, considering she had a fiance before him that died in the war that she had kept a picture of in her room, and the fact that Prior believed he could do better than her. I think Prior had a hard time finding where he fit in in the world and was not sure of his purpose, other than the fact that he wanted to return to war and do his duty, I don’t think he knew or wanted anything other than that in all reality.

Before Billy was medically released to go and rejoin his men on the front-line Captain Manning was able to find him a job in the war office in London that Prior refused to take. It seemed like he was dead set on returning to the war even when it looked like it was never going to happen. Even when he was back in the war with his men when the food was scarce, the weather was crappy, and his men scared to death, he still felt as if he made the right choice in turning down the job in London. He even voices at the end of the book when he is getting his orders of what he needs to do on the line, that he never really thought of the possibility of death and that there was no other place in the world that he would have rather had been that he would almost feel guilty if he wasn’t there.

The question of ‘Would he have taken the job in London if he knew he was going to die?’, I think is answered here. Billy Prior did not think of the possibility of himself dying, he just thought of how guilty he would feel if he let those men die and he didn’t try or participate. He did what he thought was right and stuck with his gut. I think him feeling that he had no sense of belonging anywhere else played a part in this because he used the way that the higher classes used their connections to get out of the war as an example of what he did not want to do and how that made him look at them with less respect.

The Ghost Road by Par Barker. (2019, Dec 11). Retrieved from https://studymoose.com/the-ghost-road-by-par-barker-essay 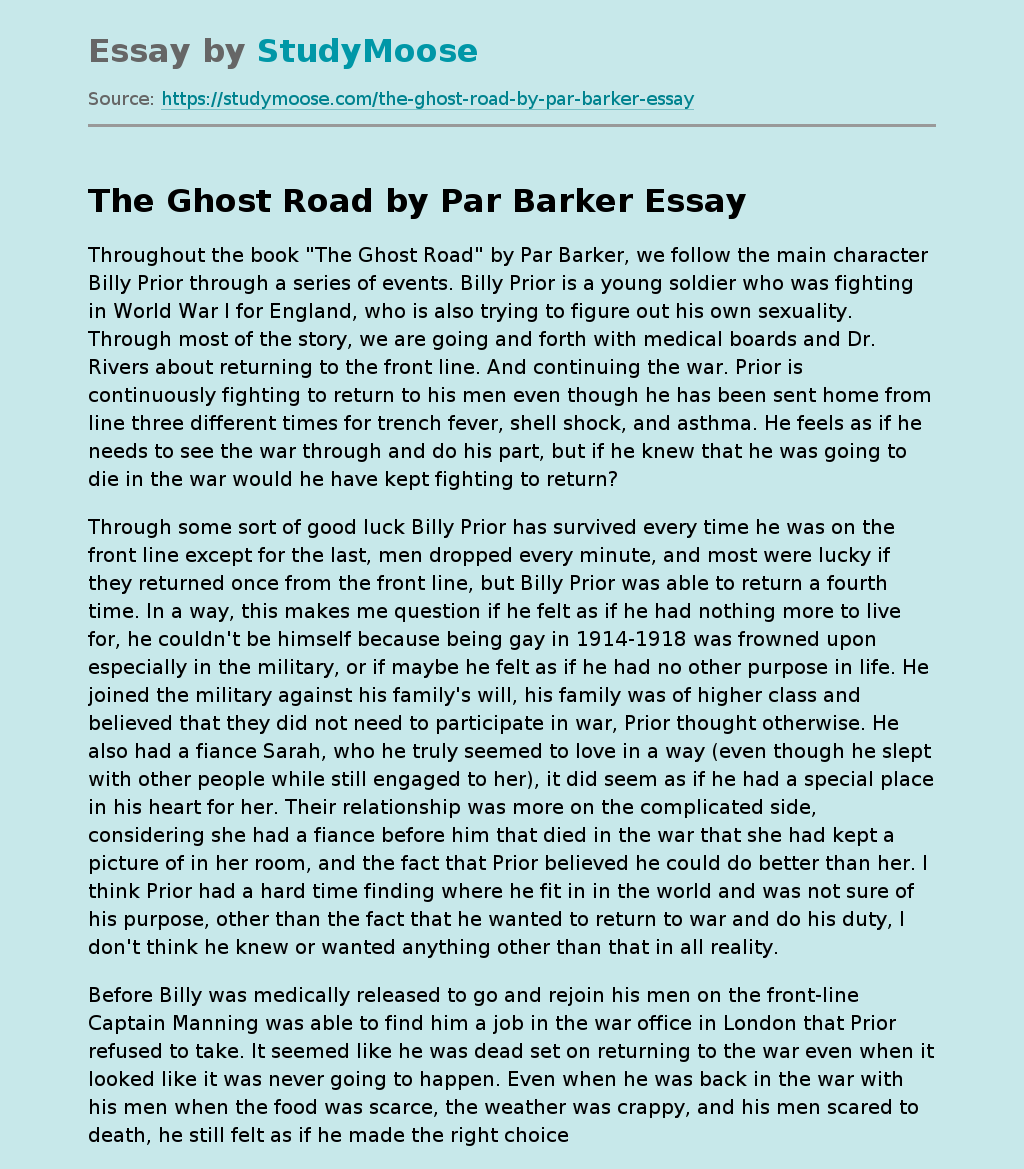