"The General History" by John Smith

Smith wrote many accounts of his experience in Virginia and New England, including The Generall Historie of Virginia, New England, and the Summer Isles. In these works, especially in his account of fighting off 200 Native Americans while using one as a shield, Smith provided early examples of the tall tale. Furthermore, his discussions of leadership and survival in the Virginia wilderness make him one of the first American writers to explore the themes of self-creation, practicality, industry, self-reliance, and cultural contact.

Don't use plagiarized sources. Get your custom essay on
“ “The General History” by John Smith ”
Get custom paper
NEW! smart matching with writer

The Jamestown colony as plagued from the beginning by unfortunate circumstances. While out exploring, John Smith was captured by the Indians. After being brought to many chiefs, John Smith was brought to the emperor of the Pamaunkee. The emperor had planned to kill John Smith at first by placing his head against a rock and bashing it in. Then Pocahontas, the emperor’s daughter, threw her head in the way and prevented his death. The emperor then decided to let Smith live and to have him as a slave.

This story also had more action than some other which I read which does make it interesting, but every once in a while it is difficult to understand due to the Old English. This story was insightful into the lives of one tribe of Indians near Jamestown.

When food shortages, heat, poor leadership, and inadequate preparation threatened to destroy the settlement, Smith came to the rescue by delegating responsibility and motivating his fellow settlers to work.

"The General History" by John Smith. (2016, Jul 22). Retrieved from http://studymoose.com/the-general-history-by-john-smith-essay 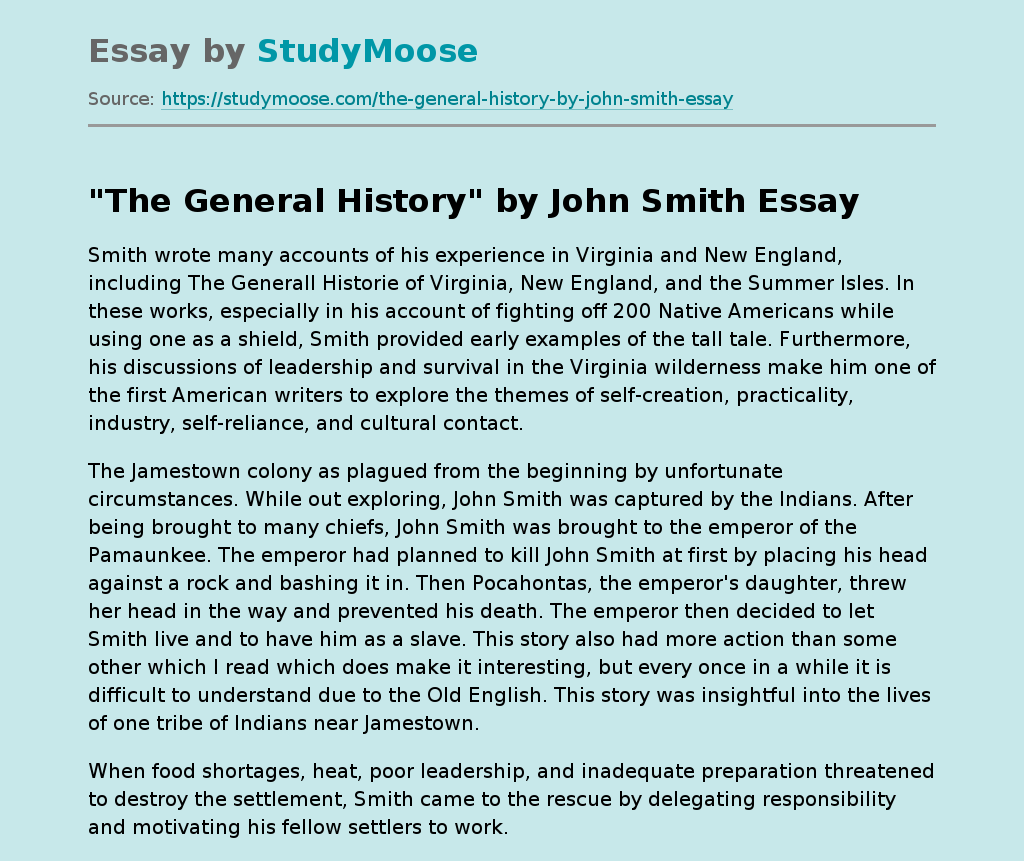