The future status of english as the global language is assured

English has become the common language used in most parts of the world, even in the western coutries use English as the first language and some other countries still regard English as a foreign language, it still can not be denied that English is the global language today. But how about its future? It still a question, because there are some people think English in the future is not assured. However, we still believe that in the future English will continue to be the global language.

Don't use plagiarized sources.
Get Your Custom Essay on The future status of english as the global language is assured Just from $13,9/Page

There are some arguments that support the statement. Firstly, some argue that english is difficult to learn, due to the words change frequently and complicate to pronounce. Particularly for some countries has a different mother-tongue, it will be hard to pronounce it.

Nevertheless, in our opinion English is a very flexible language and it is easy to use in real life with grammatical rules. In the others aspect, english consists of the adverb of times, such as when someone is telling a story, it is making trouble-free to understand the situation of event without need more explanation.

Secondly, some people also judge Mandarin will become as the future language since economy of China is booming rapidly. On the other hand, we assume Mandarin will not be global language because it is extremely difficult both of writing and pronounciation. Furthermore, the writing of Mandarin apply symbol and it is too difficult to understand. Automatically, only the minority of non-Chinese who able to be the speakers of Mandarin and understand about the using.

The future status of english as the global language is assured. (2016, Apr 30). Retrieved from https://studymoose.com/the-future-status-of-english-as-the-global-language-is-assured-essay 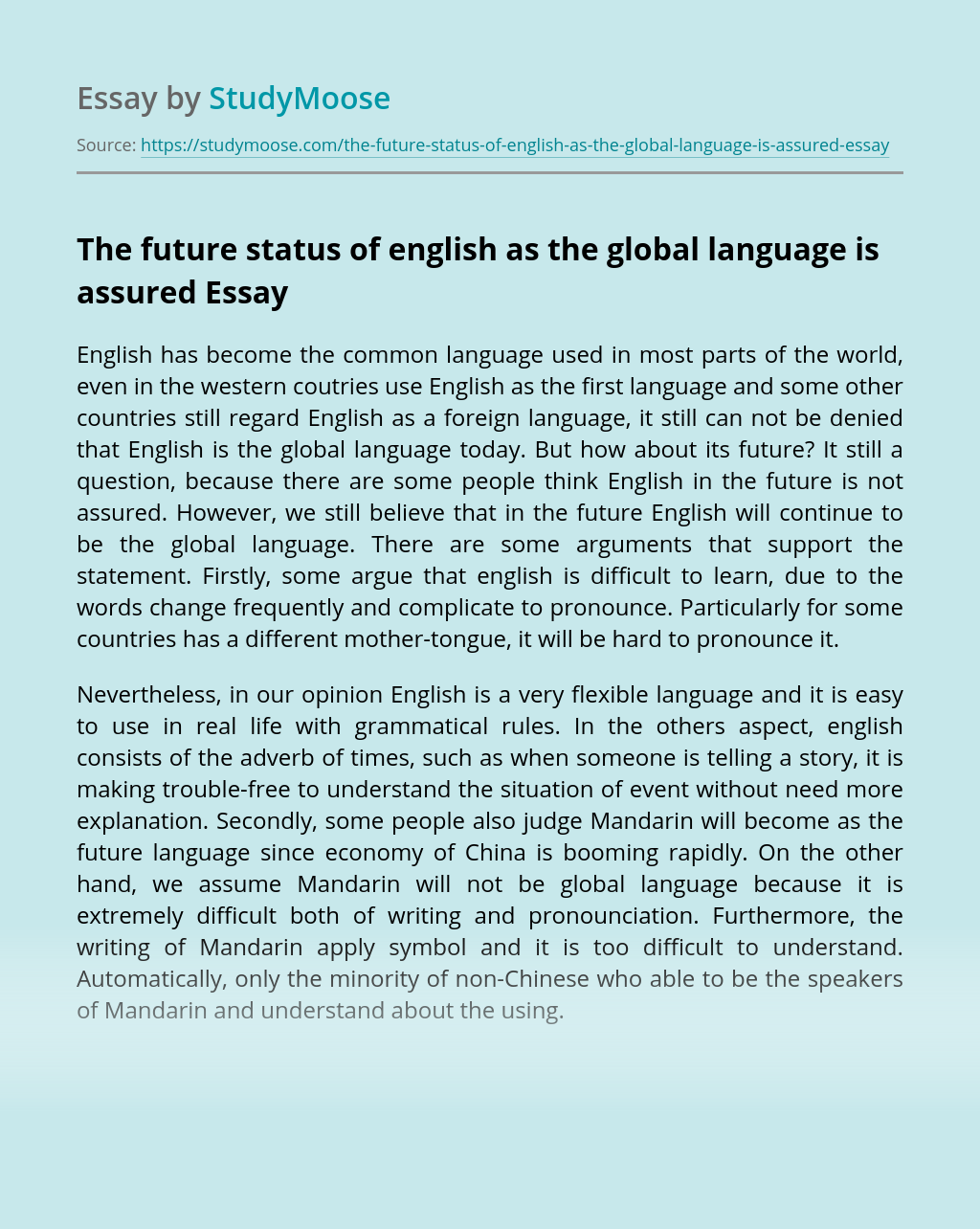 Language diversity is an important topic for all South Africans to consider since we have 11 official languages. This means that we are challenged when it comes to being able to communicate with one another. This challenge presents itself in various forms, from the workplace to people’s daily lives and personal outlooks surrounding different cultures....

In Wuthering Heights, Emily Bronte uses Language and imagery to create a very stark contrast between Heathcliff, and Edgar Linton. This contrast is not only illustrated in how these characters act, but also in their appearance, usual setting and the language that is used to describe them. Emily Bronte first uses the raw basics of...

My name is Grant Eckstein, and I plan to apply for the Second Language Studies PhD program at Purdue University for the upcoming Fall enrollment. Prior to applying, I wanted to email you to introduce myself and get more information about the program and specifically about your research interests. By way of introduction, I have...

“Identity is the essential core of who we are as individuals, the conscious experience of the self inside” – Kaufman (Anzuld?a 62). Coming to America and speaking more than one language, I often face similar situations as Gloria Anzald?a and Amy Tan. Going to high school where personal image is a big part of a...

View sample
Focus on the Learner

PART 1 The students attending the pre-intermediate course are mostly Czech nationals (except one Polish student) and are in their early thirties to sixties. They all have a good level of motivation and their reasons for learning English include personal development, relocating to an English speaking country, obtaining a better job, travelling, teaching English at...