The Future of Policing

Policing in the United States has changed dramatically since it was first brought to the thirteen colonies from England. However, some of the issues faced then are being faced in policing today. There are also new trends that are prevalent, and these trends will continue to have lasting effects on the future of policing. Even though new trends improve policing overall, they can also cause more serious issues. It is crucial to continue making changes topolicing because it allows law enforcement officers to keep up with the rest of society, including the knowledge of new crime trends.

Don't use plagiarized sources. Get your custom essay on
“ The Future of Policing ”
Get custom paper
NEW! smart matching with writer

This paper will describe the current trends and issues in policing and analyze possible solutions to improve policing tactics.

Community policing helps build trust between the police and community members by relying on citizens to help fight crime. Hence, it is a type of proactive policing (Walker & Katz, 2011). By relying on citizens, police officers have a better chance at preventing and reducing crimes within a community.

Another trend currently affecting policing is utilizing many different types of patrol. These forms of patrol can be on foot, in an automobile, on a bicycle, or motorcycle.

In the past, foot patrol was the only way an officer could patrol his beat (Walker & Katz, 2011). Consequently, foot patrol made it hard to effectively control crime in neighborhoods and perform other required duties. With a balance between each patrol type, police officers can complete both proactive and reactive patrols (Walker & Katz, 2011). If someone needs immediate assistance, the use of automobile patrol would be the best type of patrol to use in that case. For community policing, foot patrol is essential, but other types of patrol can be effective as well.

A third trend in policing today is the strong emphasis on diversity within the law enforcement field. Diversity allows better communications between police officers and members of society (Walker & Katz, 2011). Consequently, Hispanic and Spanish-speaking officers can better communicate with the Hispanic population. By having a diverse police force, minority members develop more respect for authority and law enforcement because they see that people of “their kind” are there to help protect them just like officers protect the majority group members (Walker & Katz, 2011). Diversity in law enforcement can also bring in explanations of minority members’ behaviors. All of these trends will continue into the future of policing along with some of the critical issues faced by law enforcement.

One critical issue that has been around since the dawn of policing in the United States is police misconduct. Police misconduct can come in the form of crimes committed by officers, police brutality, accepting bribes, drug and alcohol abuse, stealing evidence, excessive use of force against civilians, and other forms of police corruption (Grant & Terry, 2008). Currently, there are no long-term improvements created to combat police misconduct. Therefore, officers are not held responsible for their actions, and this is a problem because it allows police misconduct to continue and grow worse. Commissions were developed, which helped with corruption temporarily (Walker & Katz, 2011). However, none of the plans created have controlled the issue. One improvement may be more civilian review boards that can hold officers accountable for their misconduct (Walker & Katz, 2011).

A second critical issue faced by police officers is stress. Eustress is the good stress that makes officers more alert and mentally prepared for dangers on the job, and distress is bad stress that comes with performing these dangerous duties (Grant & Terry, 2008). Stress can cause officers to develop depression, and it can cause them to have problems at home and work. As a result, officers are two times more likely to commit suicide than civilians are (Grant & Terry, 2008).

With that being said, there needs to be more avenues for help out there for officers to be more successful in managing their stress. Help could come in the form of better training for new recruits regarding stress and better counseling services for current police officers. Stress will continue to be an issue within law enforcement, and it will only get worse in the future of policing. That is why it is important to develop measures now to help officers manage their stress levels instead of waiting. It is a known problem now, so why not develop a plan to combat it?

Moving along, one of the biggest issues and trends facing law enforcement today and in the future is the use of technology. Today, police organizations have access to a wide range of technological tools, and they are continually advancing and improving. Some of these include records management systems, computer-aided dispatch, GPS technology, license plate readers, biometrics (facial recognition software, for example), crime mapping via geographical information systems, and less-than-lethal weapons (Tasers, beanbag rounds, tear gas, etc.)(Walker & Katz, 2011). This new trend of using technology makes policing more efficient and more proactive, but it can also be an issue.

Technology can be an issue in that it allows criminals new means to commit new crimes (cybercrimes, such as identity theft), create new weapons, and outsmart the police. With that being said, more training needs to be provided to officers to help them effectively use new technology. Consequently, more funding needs to go into police departments for this purpose (Stephens, 2005). Without knowing how to use technology properly, it is deemed useless. Also, officers need to keep up with new crime trends and always stay one step ahead of the criminals. Without doing so, criminals will become very technologically advanced while the police remain behind the advancements.

Technology will also increase this threat because it will allow terrorists to attack the United States without ever having to enter the country. So, the question is, who has jurisdiction on these matters? That is an issue with any Internet crime. Hence, one day terrorism, along with technological crimes, may become boundaryless policing (Stephens, 2005). That is, policing in which all parties can have jurisdiction over these crime types, even international policing agencies.

Consequently, these trends and issues will continue to make their way into the future of policing. Better training, funding, support from other agencies, and proactive policing will help combat the critical issues and provide better effectiveness and successfulness for the implications of the new trends. Another improvement that can be made to policing organizations is better communication between all levels of law enforcement (Grant & Terry, 2008). Without better communication, many issues may grow to be more severe or less likely to be prevented (take terrorism, for example). Hence, many changes are dire to the future of policing.

This paper focused on current trends and issues in policing and how the future of policing currently looks. Many improvements are needed to combat the critical issues and make new trends successful. Some of the issues are police corruption, officer stress, terrorism, and technology. Some of these problems have been around since the adaptation of policing in the United States, and there needs to be more focus on improving those problem areas. Terrorism and technology will continue to be prevalent in the future and even more advanced than ever before. The question is will police officers be able to keep up with the criminals, or will they become outsmarted? That is why it is so important to plan ahead, make improvements, and anticipate the future. After all, is that not what criminal offenders do?

The Future of Policing. (2016, May 16). Retrieved from https://studymoose.com/the-future-of-policing-2-essay 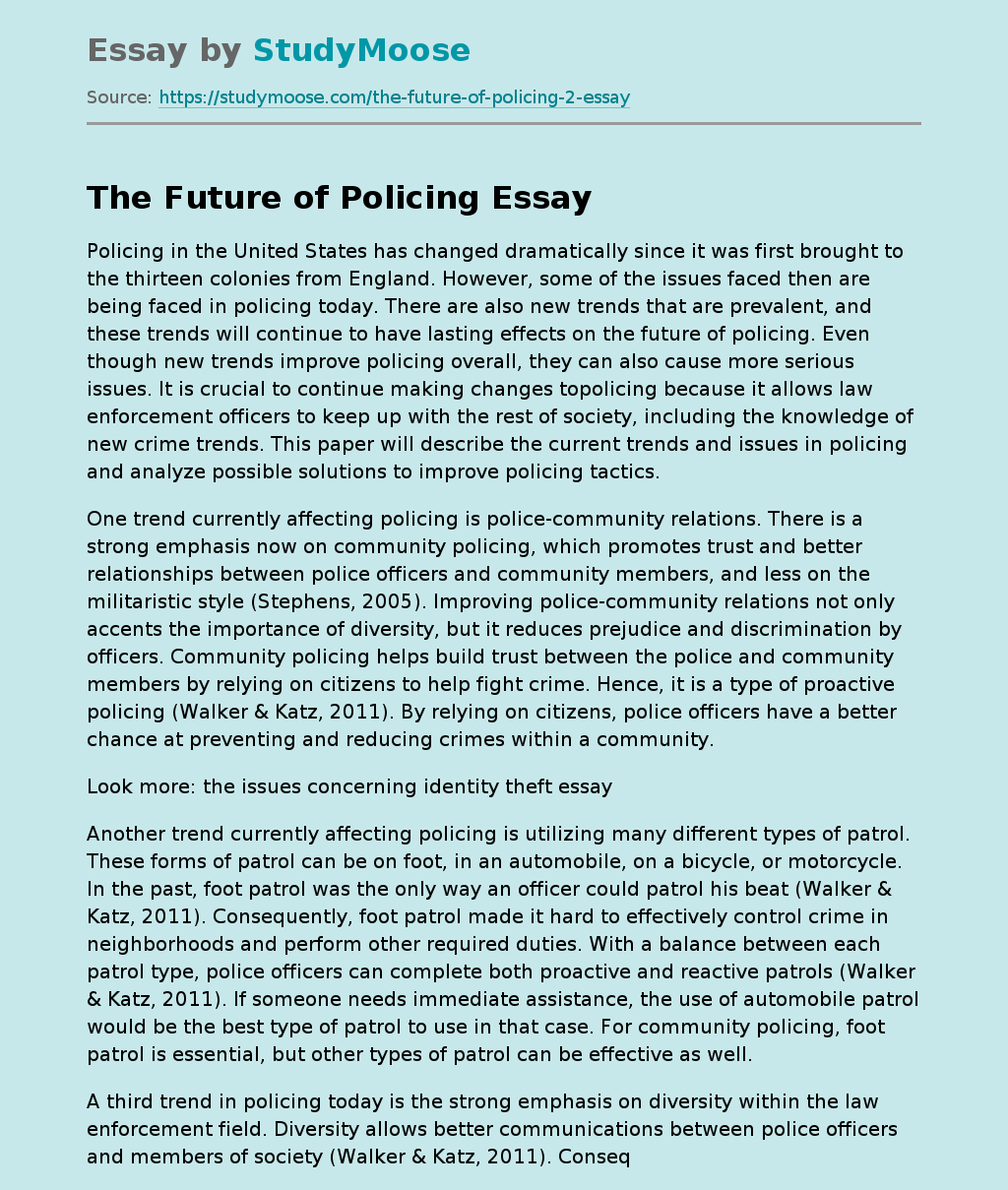