The French Revolution within Frankenstein

Don't use plagiarized sources. Get your custom essay on
“ The French Revolution within Frankenstein ”
Get custom paper
NEW! smart matching with writer

During his youth, he began to read about the work of Cornelius Agrippa, Paracelsus, and Albertus Magnus. His readings ignited his obsession for knowledge on subjects such as the philosopher’s stone and the elixir of life. Though his studies and efforts, he brings a monster to life. A monster of which he becomes terrified of from the moment he opened his eyes. Frankenstein is so terrified of his creation that he abandons him from the start.

Knowing the context of the author, a similarity is seen through the novel between the relationship of Frankenstein with his monster and the monarchy/nobility with the lower-class French citizens.

Much of this relationship can be explored within the scene where the monster tells his story to Frankenstein. The monster tells how he “learned that the possessions most-esteemed by your fellow creatures were high and unsullied descent united with riches. A man might be respected with only one of the acquisitions, but without either he was considered… as a vagabond and a slave, doomed to waste his powers for the profit of the chosen few”(115).

As the monster learned more and more about humankind, he realized the lack of equality between classes. Similarly what caused the French Revolution was a strong socio-economic inequality, people were defined by their wealth and possessions. The rich lived comfortably, while the poor were left to do the labor and starved. The monster continues to mirror this relationship as he contemplates his person. He thought that his “person was hideous, and my stature gigantic. What did this mean? Who was I? What was I? Whence did I come from? What was my destination? These question continually recurred, but I was unable to solve them”(90). This rhetoric resembles sentiments of lower class French citizens. The rise of the revolution was an enlightenment period for these citizens. People began to ask themselves questions; they sought understanding of their place in society and wanted a change. From the monster’s point of view, the perspective of the lower class French citizens is visible.

The polarization of the two characters match the opposing parties of the French Revolution. As Frankenstein’s monster continued to go through life marginalized by his creator and society, negative and vengeant feelings began to fill his being. These feelings are portrayed when “for the first time feelings of revenge and hatred filled [the monster’s] bosom, and [he] did not strive to control them”(134). Similarly to the monster, lower class French citizens were angry about the lifestyle they have been subjected to. They were tired of being marginalized from society and wanted a change.

The lower class not only wanted change, but they also most importantly wanted revenge on the monarchy and the nobility. It was a sort of revenge for the ill-treatment they have suffered. The ill-treatment that was caused by upper class who benefited at the burden of the lower class. When Frankenstein came face to face with the monster after having abandoned him, the monster demanded him to make a female counterpart. Frankenstein refused, ultimately refusing the monster a chance to live the life he wants. This parallels the way the upper class refused the lower class the live that they wanted. After having his desires refused, the monster decided to “revenge [his] injuries: if I cannot inspire love, I will cause fear; and chiefly towards you my arch-enemy because my creator, I do swear indistinguishable hatred”(141). The monster hated his creator just how the people placed their blame on the nobility; the ones who created the hell in which they lived. The monster began his revenge by killing Frankenstein’s younger brother, and he continued to kill people that were closest to him. He even killed Frankenstein’s wife on the night of their wedding. The French killed many nobilists and ultimately killed the members of the monarchy. The French Revolution was a bloody war all throughout. The lower class showed no mercy and were determined to kill anybody that was against their cause.

During the revolution, many were good citizens, yet they turned France into living hell with their revenge. To enforce equality, nobody was allowed to have titles, and everybody had the same social standing. If there was anybody that was thought to be against the cause, they were killed along with their families. They justified their cruel behavior because of their mission to change France. They thought it was only way to get revenge and create the change that they wanted. They rebelled against their “creator”, the nobility, by killing many innocents. Their dream didn’t turn out how they expected, and created a bloody, deadly, horror instead. When the monster recounts of how he felt that he“ was benevolent and good” and that “misery made [him] a fiend”, the idea of innate good or evil surfaces (95). The monster saw potential in himself to be good and to be worthy of feelings, and the lower class French citizens demanded a better government and quality of living. Both the monster and the French citizens demanded rights from their “creator”, yet they acted with nothing but violence and evilness in order to get the change that they desired.

The greedy, corrupt, and lavish lifestyles that the French upper class maintained resulted in anger and fatigue of injustice from the lower class. Many French nobles and upper class attempted to escape as the revolution grew, but they had to face the monster they created-the revolution that was coming for their heads. Frankenstein’s actions parallel those of the French nobles as he created his own monster. Since childhood, he dreamed of achieving what his predecessors were not able to which is the ability to create life. But his creation wasn’t what he had he hoped it would be. From the moment “the form of the monster on whom [Frankenstein] had bestowed existence was ever before my eyes, and [Frankenstein] raved incessantly concerning him”(46). Frankenstein did not stop and think of the consequences his dream would cause. Just as the French upper class who thrived from the work of the lower class did not pause and contemplate how their actions would backfire.

The French Revolution within Frankenstein. (2021, Apr 06). Retrieved from https://studymoose.com/the-french-revolution-within-frankenstein-essay 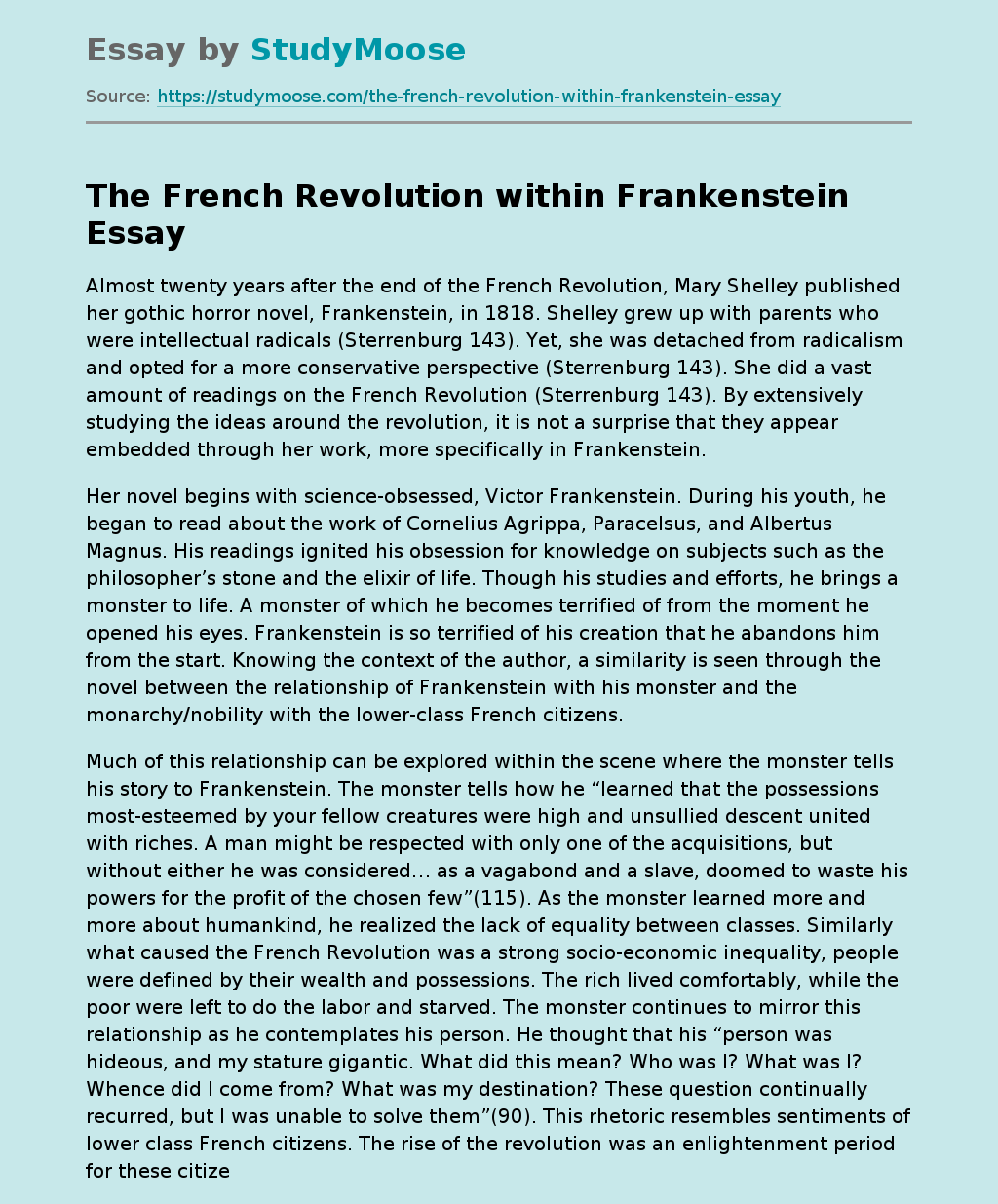