The French Revolution and Emperor Napoleon

This essay will essentially be an examination of how French historian’s interpretation of Napoleon’s domestic and foreign policies have been heavily influenced by the issues and events in French government and society. This examination will also contain an assessment of the historian Pieter Geyl and his thesis of Napoleon.

Thus, this essay will first of all discuss the aims of the French Revolution by describing the Rights of Man Declaration and August Decrees of 1789.

Don't use plagiarized sources. Get your custom essay on
“ The French Revolution and Emperor Napoleon ”
Get custom paper
NEW! smart matching with writer

The essay will also discuss the Napoleonic Codes of 1804 and its significance and Napoleons actions in foreign countries. After gaining this understanding of the French revolution and Napoleons policies to assist in understanding the historian’s interpretations, the essay will then give particular focus on the periods influencing the French historians and an individual assessment of Pieter Geyl.

This essay will address this question utilizing a post-modern method of historiography, that is, by firstly studying the period when the French historians wrote, then examining how the historian’s interpretation of Napoleon was shaped by the issues and concerns of the nations era.

Sources used in this will be predominantly secondary, with 2 primary sources. Each of these sources will be used extensively to show directly how each period the historian wrote in was colored by the event and issues of its time. Napoleon Bonaparte’s meteoric rise from a general in the revolutionary army to Emperor of the French and his equally precipitous fall to exile on St. Helena has provided historians with a wealth of topics to discuss. While the incredible facts of Napoleon’s life speak for themselves, the challenge of interpreting these facts has created decades of debate regarding Napoleon’s character, domestic and foreign policies.

Since the time of Napoleon’s fall in 1815, French historical interpretations of Napoleon’s life have followed a clear progression, with the general historiographical trends following, to a remarkable degree, key events in the French nation. Certainly, no historians of any nationality can truly claim complete objectivity, as each person remains a product of his or her own times, but the French historians have dealt with a unique problem in interpreting Napoleon. Napoleon entrenched himself as a part of the French national consciousness, and French historians have been unable to escape from this Olympian figure. French interpretations of Napoleon have not simply represented opinions about Napoleon himself, but also views of current issues in French government and society. The historical debate on Napoleon has followed a progression of historiographical periods, roughly coinciding with important events in the French state.

The French Revolution, which began in 1789, impacted the interpretations of historians drastically. When the French revolutionaries drew up the Declaration of the Rights of Man and Citizen in August 1789, they aimed to topple the institutions surrounding hereditary monarchy and establish new ones based on the principles of the Enlightenment, a philosophical movement gathering steam in the eighteenth century. The goal of the Enlightenment’s proponents was to apply the methods learned from the scientific revolution to the problems of society. Further, its advocates committed themselves to “reason” and “Liberty, property, security, and resistance to oppression”1. The August Decrees of 1789 allowed French people to gain “civil equality” as “Every citizen, whatever their origins are, can hold any ecclesiastic, civilian, or military job”2.

When Napoleon had come to power in 1799, he completed codifying the laws of France. These laws, called The Napoleonic Codes, embodied and recorded many of the reforms of the revolutions such as religious tolerance and equality before the law. It also emphasized meritocracy, not the status of ones birth. Napoleons codes allowed the peasants to retain the land they had gained from the break up of the huge Aristocratic estates during the French revolution3. Alternatively, the Codes were used to control the people and keep in their place the workers, thus, not adhering to the ideals of the revolution. Napoleons foreign policy has being subject to debate by historians as historians see Napoleons conquest as propagating the ideals of revolution with actions such as abolishment of feudal dues and tithes or a mere megalomaniac who endeavored to dominate Europe.

Historians began to analyze Napoleon while he lived in exile on St. Helena. Among these early historians, many remained violently opposed to Napoleon. Madame de Stael represented one of his most vociferous opponents. The daughter of the Swiss banker Necker, de Stael hosted a salon during the years of the Revolution, and she remained committed to its original aims. Originally, de Stael supported Napoleon’s administration, but her writings turned critical, as she perceived Bonaparte’s increasingly autocratic tendencies. In 1803, Napoleon exiled her from France4. De Stael portrayed Napoleon as the destroyer of the lofty ideals of the Revolution, a man who deceived the populace and shattered the principles of liberty.

Napoleon had no concern for the French state, she said. He simply represented a foreigner who used France to achieve his own ends. In Napoleon, de Stael saw only the megalomaniac and the tyrant5. Emmanuel de Las Cases, who accompanied Napoleon into exile on St. Helena, viewed him in a far more positive light than did Madame de Stael. In the writings of de Las Cases, Napoleon became the defender of the Revolution. He preserved the principles of liberty and equality, confirmed the destruction of feudalism, united the factions within France, and propagated the principles of the Revolution abroad6. While the interpretation of de Las Cases differs starkly from that of de Stael, their personal experiences with Napoleon colored their individual portraits.

The French Revolution and Emperor Napoleon. (2020, Jun 01). Retrieved from https://studymoose.com/the-french-revolution-and-emperor-napoleon-essay 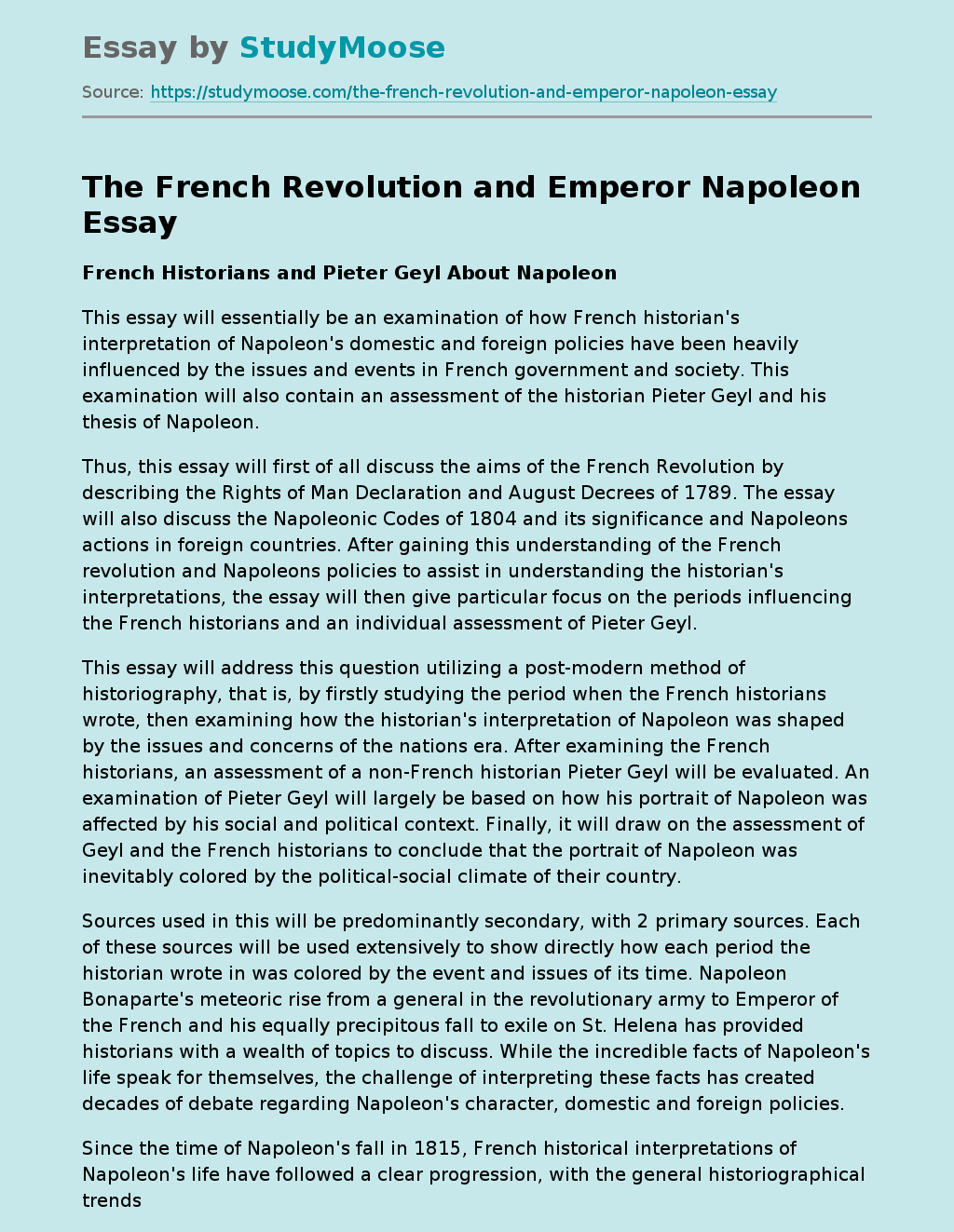