1. What are the four basic activities that comprise the management process? How are they related to one another?

” The four basic activities that comprise the management process are as follows:

Planning and Decision Making, Organizing, Leading, and Controlling. Managers engage in these activities to combine human, financial, physical, and information resources efficiently (using resources wisely and in a cost-effective way) and effectively (making the right decisions and successfully implementing them) and to work toward achieving the goals of the organization.

Planning and Decision Making set the organization’s goals and decides how best to achieve them.

Don't use plagiarized sources.
Get Your Custom Essay on The four basic activities in management process Just from $13,9/Page

3. Briefly describe the ten managerial roles identified by Mintzberg. Give an example of each.

There are three Interpersonal roles in the manager’s job:

Liaison: Serving as a coordinator or link between people, groups, or organizations.

There are three Informational roles in the manager’s job:

Monitor: Actively seeking information that may be of value.

Disseminator: Transmitting relevant information back to others in the workplace.

Spokesperson: Formally relaying information to people outside the unit or outside the organization.

There are four Decisional roles in the manager’s job:

Resource Allocator: Deciding how resources are distributed, and with whom he or she will work most closely.

Negotiator: Enters into negotiations with other groups or organizations as a representative of the company.”

“The effective practice of management requires a synthesis of science and art, that is, a blend of rational objectivity and intuitive insight. Most managers attain their skills and positions through a combination of education and experience.

Science and Art are equally important in a managerial role.

Many management problems and issues can be approached in ways that are rational, logical, objective, and systematic. Managers gather data, facts, and objective information. They can use quantitative models and decision-making techniques to arrive at “correct” decisions. And, they need to take such a scientific approach to solving problems whenever possible, especially when they are dealing with relatively routine and straightforward issues.

Even though managers may try to be scientific as much as possible, they must often make decisions and solve problems on the basis of intuition, experience, instinct, and personal insights. Relying heavily on conceptual, communication, interpersonal, and time-management skills, for example, a manager may have to decide between multiple courses of action that look equally attractive. And even ‘objective facts’ may prove to be wrong. Thus, managers must blend an element of intuition and personal insight with hard data and objective facts.”

7. Some people argue that CEO’s in the United States are paid too much. Find out the pay for a CEO and discuss whether you think he or she is overpaid.

Grasso has been chairman and chief executive officer of the New York Stock Exchange since June 1995. He became executive vice chairman in 1991 and is the first member of the NYSE’s management to be elected to any of these positions in the NYSE’s history. Grasso joined the Exchange in 1968 and has worked his way up through the years. He has served as director of listings and marketing, in charge of adding qualified prospects to the NYSE’s list of companies. Mr. Grasso became executive vice president, marketing group, and then executive vice president, capital markets, with responsibility for all financial products and the market data group.

Among his extensive and impressive list of accomplishments, Grasso serves on the board of directors of The Home Depot Inc. He serves as the vice chairman of the National Italian American Foundation, and on the Board of the Congressional Medal of Honor Foundation just to name a few. Mr. Grasso received honorary Doctor of Laws degrees from Fordham University School of Law, Pepperdine University Graziadio School of Business and La Salle University, and an honorary Doctor of Commercial Science degree from New York University and Pace University.

No, I do not think Dick Grasso is overpaid due to the fact he has obviously earned his keep. He laid the necessary groundwork in order to achieve ultimate success.

9. Locate a recent business management publication like Fortune, Business Week, or Forbes. Read an article in the magazine that profiles a specific manager or executive. Identify as many examples in the article as you can illustrate management functions, roles, and/or skills.

Within weeks of Ms. Herda becoming President and CEO, Time Warner Telecom issued $400 million of Senior Notes, and in May 1999 completed a $290 million IPO. Ms. Herda has since raised a total of nearly $3 billion in the public and debt markets. This financing and the company’s positive EBITDA position, make it a fully-funded entity. 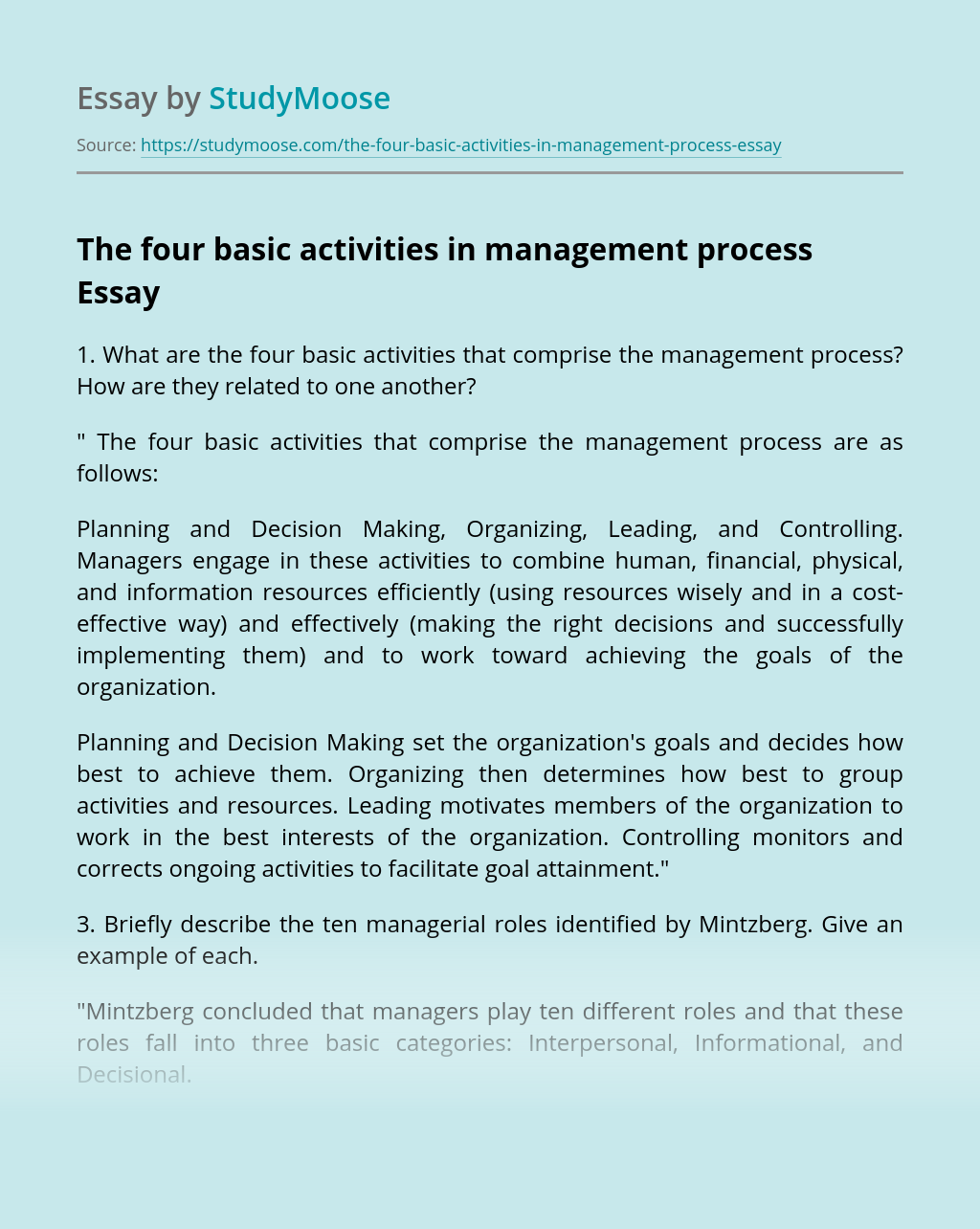 3M was and still is a worldwide leader in innovation. After a rough start in 1902, over decades, 3M enjoyed national and global growth as well as a reputation for remaining a hothouse of innovation. In the 1990’s, 3M was trying to move away from the incrementalism and it sought to change the mix of...

When we are speaking about software, technology, computers involving manufacturers, licenses and supports, what is the business that’s the most popular and runs efficiently? Naturally it is the Microsoft Business. Microsoft thought that innovation can develop celebrations and chances for many individuals and organizatiobs all over the world. So, they established new technology that launches...

In October 1998, Newell Company was considering a merger with Rubbermaid Incorporated to form a new company, Newell Rubbermaid Incorporated. The amalgamation would be through a tax-free exchange of shares valued at $5.8 billion. Newell had three major product groupings: Hardware and Home Furnishings, Office Products, and Housewares. Rubbermaid is a renowned manufacturer of a...

The researchers were motivated to use the Luzon Brokerage Corporation

The researchers were motivated to use the Luzon Brokerage Corporation as the main subject of their research because of the issues they have heard from the past customers which are complaining about the service of the LBC. They wanted to help the LBC to know what are the lapses occur from their transaction and help...