There’s a forest bordering the town that I live in. The adults refuse to go near it or talk of what lies within. From the time we consciously understand our parents teach us not to step foot in there because the “Unmentionable Monsters” will get you. Of course as kids with wild imaginations we made our own predictions about what it could be. The Boogie Man, Dracula, werewolves, ghosts, and all sorts of other ghouls came to mind. These are just rumors made in a child’s mind.

Don't use plagiarized sources. Get your custom essay on
“ The Forest – Creative Writing Essay For English ”
Get custom paper
NEW! smart matching with writer

The fact in the situation is all those who enter The Forest, never return. They disappear without a trace. No trail, no clues, no nothing. This is where I had issues with The Forest. How can somebody just disappear?

From the time of my first memory up until now I have been filled with curiosity. As I grew my instinct to investigate pulled me towards the mystery of The Forest like gravity pulls an object to earth.

Then at 16, I found myself with the greatest opportunity hanging over my head.

“So Chris, are you up for it?”Micah Questioned.I’m Chris and Micah was my best friend. To the outside world I was a completely average quiet teenage girl with a polar opposite best friend. Everybody who knew me personally knew I was crazy.

“Are you kidding me? Did you even have to ask!?!” I practically screamed at him.This would be the trip of a lifetime for me. Micah asked me to go camping in the “forest” with him and some friends.

There was no way I would turn him down.

That Friday night, loaded up with food, clothes, tents, matches, safety gear, climbing ropes, and more, we set off into The Forest. Trekking farther and farther into the foliage and scanning with our flashlights for danger we finally came across a clearing big enough to set up camp for the night. As we set our tents in a circle Julian, Micah’s brother, finished first and was then sent out on firewood duty.

“Hey Chris, have you seen my brother?” Micah asked and I poked the fire.

“No, not sense you sent him out to get fire wood”

“Then where did that fire wood come from?” he pointed towards the fire I was tending to.

“It was here when I finished my tent. I suspected Julian left it then went to bed. There is a lot here and I figured he was tired after the haul.” I explained.

“Julian is not in his tent.”

It took me until after midnight to convince Micah that his brother would be ok and probably just went exploring. With him finally asleep I was able to get some shut eye. It didn’t last very long though.

I could tell it was near dawn when the noise woke me due to the pink color that lit up my tent, but the time itself was the least of my worries. Something outside of my tent was splattering liquid on my tent and making a gurgling noise. Thinking it was one of the guys playing a prank I quietly unzipped my tent and crawled around to sneak up behind them. What I saw would be imprinted on my soul forever.

Julian was hunched over Katherine tearing at her stomach with his teeth. The dark spots I saw on my tent were blood stains. Lukas body was lying in an unnatural position off to the side. His chest was torn open and his internal organs gone. Julian’s clothes were shredded and it was obvious some of the blood that encased most of his body was his. My mind started to race with questions. “What happened to Julian in the forest? How did I not hear the commotion until now? Where are Micah and Dustin? Is Julian infected with something? What if whatever got to Julian comes back? Where did the firewood really come from? Is somebody playing games with us?”

As I was lost in my own thoughts I didn’t hear as somebody quietly snuck up behind me. It was too late when I did notice because they had their hand wrapped around my mouth dragging me back. I screamed but it was heard only by deaf ears due to the restraint. My capture dragged me all the way back into the forest before releasing me. As I turned around to fight I realized it was only Micah and Dustin. Thankfully, all their organs were intact and there was no blood. At their feet sat a pile of supplies they must have grabbed before getting me, it wasn’t much though.

“We have to get out of here. What happened to my brother while he was out is a mystery, but it is evident he is no longer human.” Micah whispered “Yeah, but where do we go? Home? I have a feeling we won’t make it there!” Dustin argued

“Will you quit being a pessimist?” I whisper yelled. “We have to start somewhere and home is the closest town so we head that way. Once to safety we can figure out what the hell is going on.” As I talked my voice became louder and I didn’t hear the audible crack coming from behind me. I did however see the look on Dustin’s face. Dustin was a big guy. There wasn’t much that could scare him. The look of pure terror on his face prompted me to turn around. There standing about five feet away from me was Luka. Lukas body that had been completely demolished now did not have a single blemish. Well, he was fine other than the red eyes.

“Chris why do you look so scared?”Lukas voice was deeper. It was like it was his body but not him.

Micah confirmed my suspicion with a single word. “Demon.”I can still remember the times when Micah and Julian’s grandma would tell stories of how if you died in The Forest a demon could stake its claim over your body. I suspected that was what is happening in this situation.

“Why don’t you come over here Chris?”Whatever was in Lukas body was trying to get into my head. I could feel it poking around in my mind as if trying to take control. I didn’t trust this thing and I didn’t trust Dustin to be strong willed enough to fight it off in his mind. It was time to run.

As me and Micah took off into the forest I noticed Dustin stayed behind. I was right he had fallen into the trap. Not long after taking off footsteps could be heard in pursuit. I did the stupid thing and turned my head towards Luka and Dustin. Running into a tree hurts. Then being pulled up buy your hair doesn’t help the cause. I was caught and Dustin was able to make quick work of catching Micah.

Hours later I was tied up with MY climbing ropes, in MY tent. Luka had re-killed Julian; something about an unintelligent lower level scum. I had no idea what happened to Dustin and Micah, but I had a feeling their luck ran dry and they were now in the same situation as Luka. Katherine’s body was still on the ground when we were walked back into camp. Because we are pure, girl’s bodies are unable to be possessed. Unluckily for me that doesn’t mean were not entertaining while still alive.

Those things outside laughed and enjoyed normal conversation as if they were human, but I knew better. I want this to be a warning to all those who live around The Forest. It is filled with an evil unlike any other. Luka, Micah, Dustin, and I are the only survivors of The Forest, but not all of us survived. 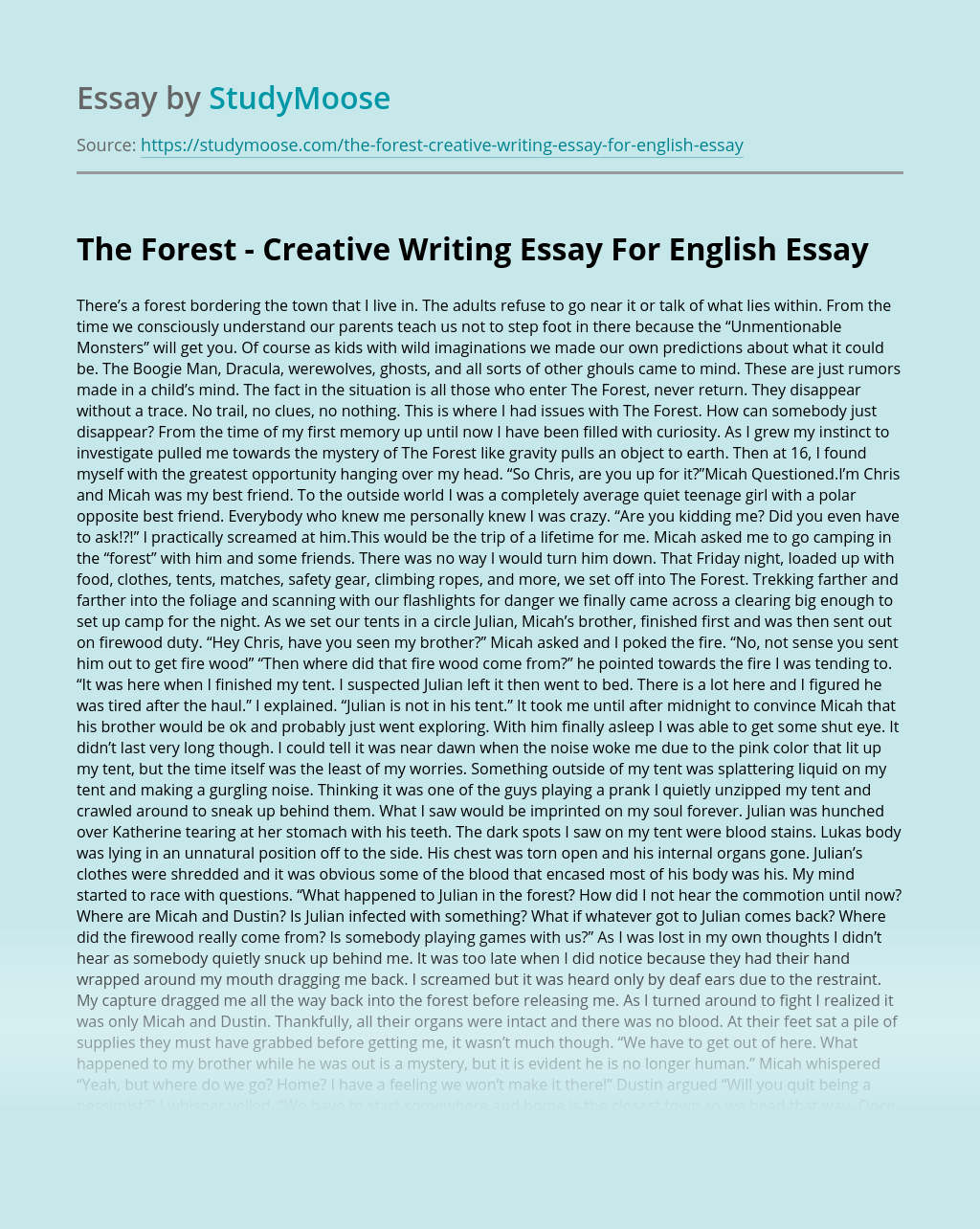