The First World War was one of the bloodiest wars of world history, taking over 9 million soldiers, yet it was referred to as the “Great War” for many avid reasons. The war opened many new doorways and allowed for new nations to form, new ammunition and artillery were made as well. Although calling World War I a “great war” can be debated, what came from it gave our nations the help that they needed at the time. At the beginning of the war, many people expected the war to be fast, expecting little violence, but it grew so big until 60 counties from all over the world were involved, and with each nation that came so did new ideas for war tactics, weaponry and ways to win.

Don't use plagiarized sources. Get your custom essay on
“ The First World War is “Great War” ”
Get custom paper
NEW! smart matching with writer

Although there were many conflicts that built up to World War I, it officially started when Archduke Franz Ferdinand of Austria-Hungary was shot and killed by a person of Serbia. After the massacre, Austria-Hungary declared war on Serbia, and from then on the battle went on for six years.

The start of the war brought excitement to soldiers. They were eager for adventure. They said their “goodbyes” and went off to fight for their nation, very proudly. What they did not know, was that many of them were not going to be coming home and if they did make it out alive, they would be coming home many months or years after they expected. On July 28, 1914, they entered into one of the bloodiest wars of history that changed world history forever.

At the beginning of the war, allies of both the nations joined in on the fighting. On Serbia’s side, the United Kingdom, France, and Russia were backing Serbia and on Austria-Hungary’s side was Germany. Austria-Hungary came out strong at the beginning winning many of the early battles. A huge contribution can be given to the ammunition that was created during the war. Both sides were very clever with what they came up with. When the Germans created poison gas it became the deadliest weapon that was used in the trenches. It made soldiers die a very brutal death. They would breathe it in without even knowing, and for weeks they would vomit and bleed both internally and externally until they died. Some soldiers were on their deathbed for up to five weeks before dying. Now, poison gas is banned from being used as warfare.

Trench warfare that was invented in World War I is still used in modern day and was used throughout all the wars that followed. Having all these new inventions was a major significance in the war. Things like the machine gun, artillery, tanks and airplanes were invented. They were all used differently, but they all had the concept in the end, to kill the enemy. The machine gun was fast and furious. It could fire up to 400 rounds of ammo per minute, killing one after another and not even allowing the person on the other side of the gun. Airplanes were invented and used to fight from up in the air. Inside, soldiers had machine guns and bombs. The airplane made it much easier to attack the enemy because they were able to look down upon them and it was much harder for the enemy to shoot them for obvious reasons. Now, the airplane is used so often and is a convenient and fast way for traveling far distances. Tanks and artillery were also invented during World War I. Artillery needed 12 men to handle the machine. The artillery had large mounted field guns that shot out a shell of 900 pounds. Tanks were the least effective until they became revolutionized. At first, they went up to three miles per hour, making them a very easy target. All of these utilities are still used today, and without them, history would not be the same. They were a huge part of the success in every war.

When Germany surrendered on November 11, 1918, the battle between them and the allies was finally over, but the war did not officially end until June 28th, 1919, when both the Allied Nations and Germany signed the Treaty of Versailles. Most nations agreed to sign this treaty, but the people of the United States did not, and so they did not sign it. The treaty punished Germany. They lost all of their colonies that were overseas and lost much of their land. Germany also had to give all of their goods, such as ships, livestock and other material to the allies. Although Germany suffered from the war, the allies did not. Britain got to keep its power over the seas and its empire. After the war, the United States went into an uprise. For twenty or so years, the people of the country were very wealthy and businesses were booming. The end of the war caused great success for the United States, but for only a little bit.

World War I was the start of our world’s history. The inventions and accomplishments that were made went onto create so much more history, such as World War II, which followed shortly after. It was a “Great War” because of all that came from it, and although many lives were taken, they all went down in history. 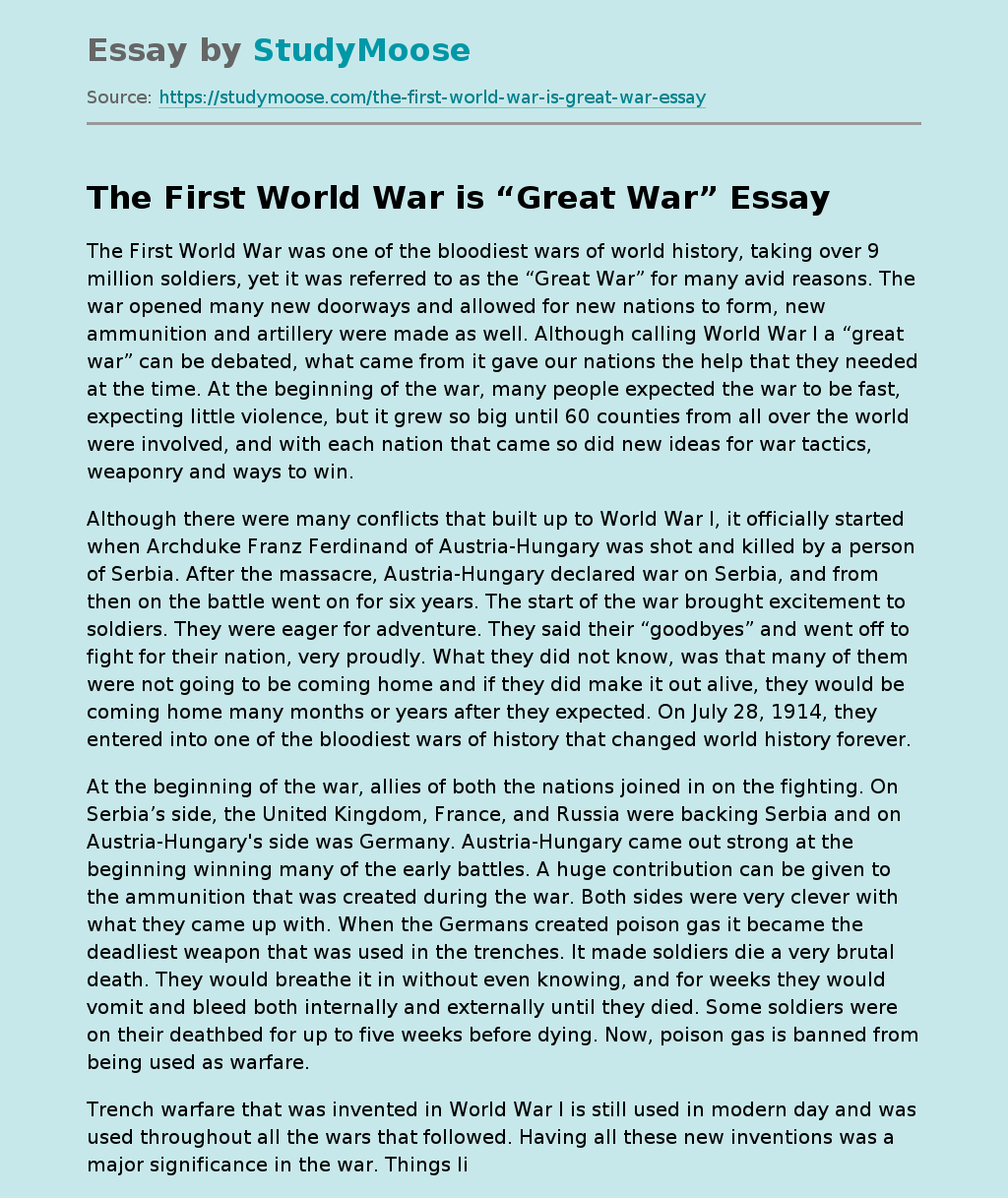