A legally themed thriller starring Tom Cruise and Gene Hackman, The Firm was one of the movies revolving around Partnership and the related laws. Mitch McDeere, played by Tom Cruise, is a newly employed associate at Bendini, Lambert & Locke and a graduating law student from Harvard. Although gladly absorbed by the company through tempting salary packages, McDeere finds out the firm’s illegal activities causing him to be in action.

Generally, The Firm is not only a partnership concern. It includes related laws about overbilling, attorney confidentiality, and criminal cases.

Don't use plagiarized sources.
Get Your Custom Essay on The Firm Movie Review Just from $13,9/Page

Listed here are some of the instances where law can be observed: •The partnership Bendini, Lambert & Locke is a particular one for the practice of a profession (Article 1767, 1783). It is a general professional partnership. Article 1844 states that the firm is not a limited one. Being one guarantees the public of everything about •In this film, management has been agreed upon to Royce McKnight and to others not being stated.

Accordingly, Article 1803 doesn’t apply in any instances. •Under Article 1804, about subpartnership, McDeere is not even a subpartner. •Article 1770 states that the partnership must have a lawful object or purpose, and must be established for the common benefit or interest of the partners.

Actually, the way by which the firm was created is a lawful one, being it created for the practice of a profession. However, this practice of profession is nevertheless the cause of illegality of its object or purpose. Having been stated by Voyles that Bendini, Lambert & Locke is the sole legal representative of the Morolto Brothers, the Mafia. •Article 1806 states of the rendering of true and full information. It may be implied from the film that all partners know of the case of Morocco Ltd. This case was entirely hidden from McDeere, such a disadvantage for him being a mere associate. Nevertheless this information should have been communicated by Tolar to McDeere. Actually, this hiding of information is also evident when McDeere is trying to copy files from the company database. It maybe implied from this situation that this “hiding of information” is “binding” upon all of the partners since not all partners have access to such files.

•According to the Rule 1.6 Confidentiality of Information (Rules of Professional Conduct of American Bar), in a client-lawyer relationship, a lawyer may reveal information relating to the representation of a client the lawyer reasonably proves necessary. This is clearly present in the scene where FBI Director Voyles is interrogating McDeere about some help in the case of the firm. •It is also stated in Rule 1.5 Fees (Ibid.), that fees should be reasonable. Some of the partners are guilty of overbilling their clients. McDeere figured it out while talking with a client. •Under Article 1830, it may not be seen from the film but impliedly, the firm is dissolved. Documents convincing the firm’s illegal actions mean the firm is void ab initio and the instruments are confiscated in favor of the state but it is not clear whether such happened in the movie (Article 1770). 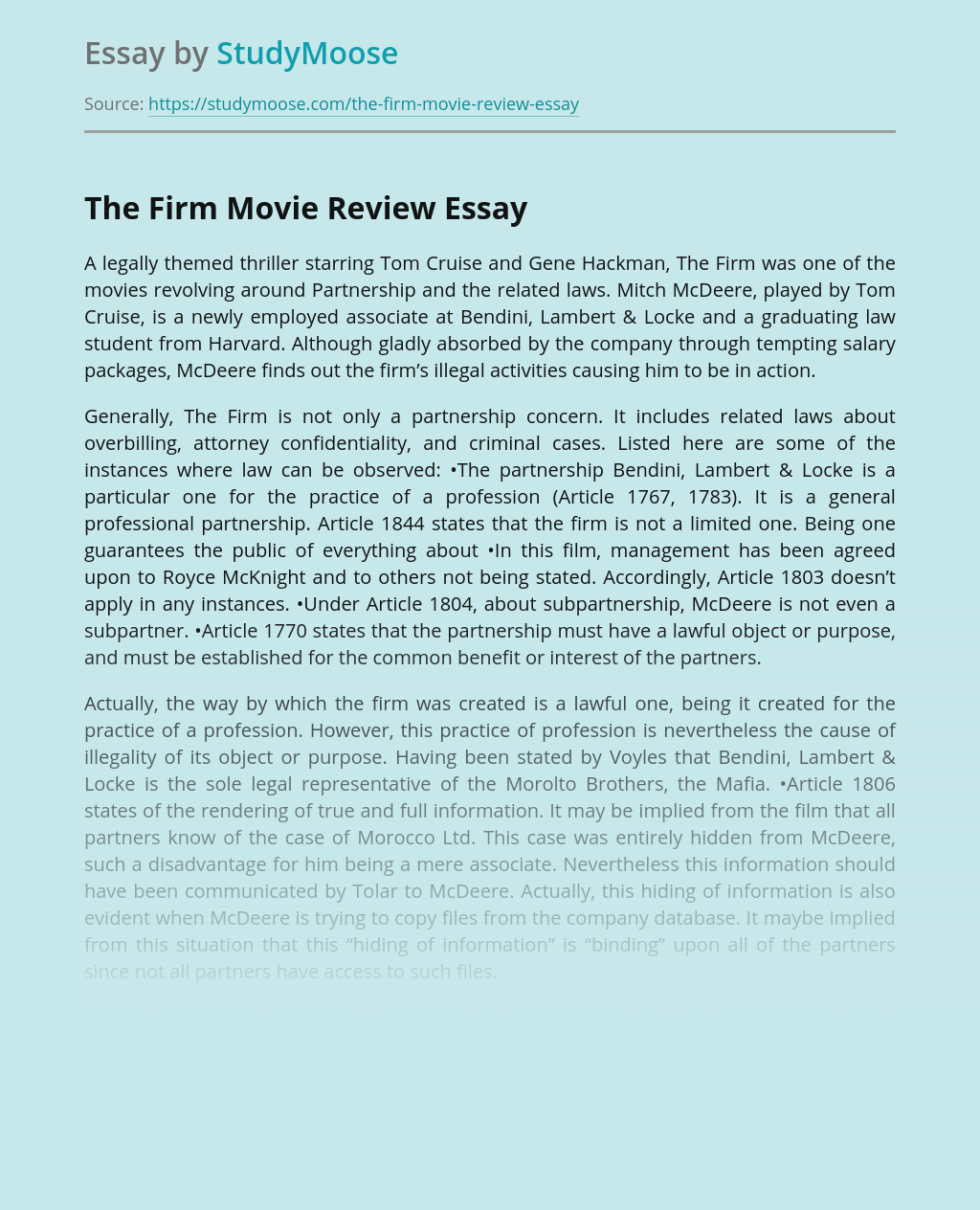 Describe what can happen in the society without law, especially in the field of business

– Fraus omnia corrumpit (theory of fraud), according to which one can never rely on a fraudulent act to justify the application of a rule of law to its own profit. The scope of application, the conditions of application, and the legal effects thereof will be defined, since they are subject of debate. Further, the relation...

View sample
Why I Want to Be a Lawyer

“I like hats, particularly that a person. That looks great. Possibly I could slip that one into my bag when nobody is looking so I can go home and look extremely good in that actually cool awesome dashing hat.” Have you ever asked your self these questions, and even had a constant urge to take...

It seems impossible to define Dr. Faustus, from Christopher Marlowe’s play “Doctor Faustus,” as being anything other than tragically flawed. Faustus is not evil, foolish, or rebellious. Faustus’s flawed nature rests solely on his own prideful, overly-ambitious ways. Even so, the question still remains as to whether or not such an all-encompassing flaw should result...

David Ricardo, a 17 century English political economist, is considered an extremelyinfluential classical economist along with Adam Smith and Thomas Malthus. Ricardo was bornon the 27th April 1772 and helped develop key economic theories until his death on the 11thSeptember 1823 1. Ricardo grew up in a dominate English family where his father was also...