Deutsche Brauerei (DB) is a German company owned by 16 Schweitzer family members. It was founded in 1737, and has been in the family for 12 generations. DB manufactures two types of beer; light and dark. Both are well known and have won quality awards.

The case centers around the financing of the company’s expansion into the Ukrainian market (and possibly further into Eastern Europe) and its impact on financial planning, future dividends and employee compensation.

A fire destroyed the manufacturing plant in 1994.

Turn in your highest-quality paper
Get a qualified writer to help you with
“ The Financing Of The Deutsche Brauerei’s Expansion Into The Ukrainian Market ”
Get high-quality paper
NEW! AI matching with writer

New equipment was purchased. The new equipment was more efficient and was capable of increasing the capacity. Once DB expanded into the Ukraine (1998), the additional capacity became necessary. The move into the Ukrainian market was very risky because in 1995 and 1996, their government was privatizing a lot of the free market. This did not impact DB.

For the Ukrainian market, Oleg Pinchuk was hired to market the beer very aggressively. He was stolen from a major Ukrainian rival.

He had instant success because the beer was considered to be richer than the domestic competition. Also, the market was very fragmented which is easier for a newcomer to have instant success.

The DB beer in Germany served its markets through a network of independent distributors. The distributors purchased the beer, stored the beer in their refrigerated warehouses and then sold the beer to their customers. Since the Ukrainian market was new, Oleg could not rely upon an established network of distributors. He had to establish a distribution strategy for DB in the Ukraine.

Oleg is providing financing to the Ukrainian distributors. But he has had to relax the terms several times now. It started at 2 percent 10, net 40. It was increased to net 80, and will be increased again to net 90.

Greta Schweitzer will need to advise the board on the financial plan, the dividend declaration and the compensation for Oleg. She would also have to analyze why DB was borrowing so aggressively yet they were so profitable. Lastly, Greta would need to determine if an aggressive penetration of Ukraine was necessary to obtain greater profits.

The pro forma income statement shows us that the revenue from the Ukraine is very important for DB to grow. Appendix 3 details this analysis. Ukraine was first penetrated in 1998, and by 2002 it is projected to encompass 41% of revenue for DB. The Ukrainian growth rate is higher, and it is feasible that one day the Ukrainian sales could surpass their domestic sales. It is probably more likely that international sales will surpass domestic sales if DB was to expand into other countries, especially former Soviet countries. Ukrainian sales have the same operating margins as German sales. One downside to selling products in the Ukraine is converting the currency back to their domestic currency (part of this case the domestic currency is the Deutsche Mark, in the latter part it is the Euro). Due to a Russian crisis in 1998, the Ukrainian Hryvna was devalued against the DM. During the time of this case, the Ukrainian Hryvna never recovered. It’s been trading in the same range against the Euro for the past two years.

A key to the continued success in the Ukrainian market is Oleg, and his ability to network with the new distributors, set-up financing, and find new markets in the country. His services are very valuable, and his knowledge of the country’s beer market is affluent. Based on the old compensation agreement, he would be set to earn €98 in 2001 and €96 in 2002. But a new compensation package is being proposed to the board. It will increase his pay by .1% on new sales commission and €8,500 on the base salary. This totals approximately €20,000 in each 2001 and 2002 (see appendix 4 for details). Greta needs to propose that they increase his salary. It would be a huge liability if he was to leave DB for a competitor. The Ukrainian sales forecast would need to be lowered for 2001 and 2002.

One of the concerns from the board of directors is their tendency to borrow aggressively. They do not understand why if they are so profitable they need to borrow so aggressively. The biggest driver to the short-term borrowing is the large dividend this company pays. They are paying a 75% dividend. Compare this to other companies similar to DB (Anheiser Busch, Coors, Molson, Diageo, Starz and the Boston Beer Company) and they pay a good dividend which is around 1% to 5%.

The difference is these companies I mentioned are publicly traded. A 5% dividend is really high, but since these companies are considered cash cows because of the high cost of barriers to entry, they are expected to pay a nice dividend. DB could lower their short-term borrowing by lowering their dividend. This will not make the board of directors happy, since it has been mentioned that for some of their family members, this is their source of income. But lowering the dividend can be offset against moving into new markets. The Ukrainian market has a good financial projection. The €2.5 million in additional profits can be reinvested into the company to fund its growth instead of increasing the owner’s income. This will have a positive long-term effect. And since this company is always positioning itself for the long-term, it is something they should vote on at the next board meeting.

DB also needs to take into account the increase in days sales in accounts receivables because of financing in the Ukraine. Due to the bootstrap financing the occurs in the country, accounts receivables for DB will increase in the next couple forecasted years. This will put an additional strain on working capital, and will need to be financed thru short-term debt. Or, as previously mentioned, decreasing the dividend in proportion to the payout on additional income until the free cash flow from operations can support the working capital.

Appendix 5 details out how DB can reduce its dependency on short-term financing. My proposal is to freeze dividends to 2000 levels and to maintain the current cash position on the balance sheet from 2000. This will free-up money for the Ukraine capital expansion.

Alternative 1 involves penetrating the Ukrainian market with aggressive selling. In order to do this, Oleg’s employment needs to be secured. He knows the market best. It would also be a large risk for the company to lose him to a competitor. He left a competitor to come to DB, he would leave DB for a competitor if he was not receiving a good compensation package.

Greta should advise the board that an aggressive penetration of the Ukraine will increase their income. The owners receive a 75% dividend on the company’s earnings. By aggressively marketing their product in the Ukraine, revenues are expected to increase by over €11 million in 2001 and 2002. This will result in an additional €2.5 million in profits for each year, and approximately €2 million in additional dividends annually for the 16 owners.

Exhibit 5 is a break-even analysis of DB, and proof that DB should be aggressively marketing its product into new areas. A minimum of 100,000 hectoliters of beer must be sold in order for DB to be profitable. After that break-even point, profits will keep increasing faster than costs.

Having a strong presence in another country other than Germany is a valuable strategic move for the company. Diversification is important. If the product has a media relation issue, all is not lost. They still have another market to for their inventory until the issue blows over. It is more supporting evidence for alternative 2.

Alternative 3 may have been a good option in their first 260 years of business, but it is no longer a smart business move. The Ukrainian market has shown that there is a major market for their product outside of Germany. It also is not difficult to tap into these markets. To be successful in the Ukraine, the formula was stealing Oleg from a competitor and having him set-up the distribution system. That process can be duplicated in some of the other countries with fragmented beer markets.

The solution is the suggestion that Greta Schweitzer will make to the board of directors. First, Greta should explain the short-term debt financing concerns are a result of excessive dividends. She should advise the board of the benefits of reinvesting the earnings back into the company to grow the company. The Ukraine should be used as an example. A key figure to show is that by 2002 (its 4th year), the Ukraine will comprise of 41% of revenue, and that they have the same margins as the domestic market. The current downside is the foreign exchange rates, but this can be hedged against.

Second, Greta should advise on alternative 2. This is the aggressive expansion in the Ukraine, and into other Eastern European markets. They should project out further than 2 years, and show the impact of expanding into other countries will have on its financials. Additional financing will be required, but the payout is very large. Just the Ukraine will have an ROI of over 130%.

Third, Greta will need to strongly advise to board to approve the additional compensation for Oleg. At only €20,000 per year more, they will retain his services. This should be Greta’s easiest proposal of the three.

The Financing Of The Deutsche Brauerei’s Expansion Into The Ukrainian Market. (2017, May 16). Retrieved from https://studymoose.com/the-financing-of-the-deutsche-brauereis-expansion-into-the-ukrainian-market-essay 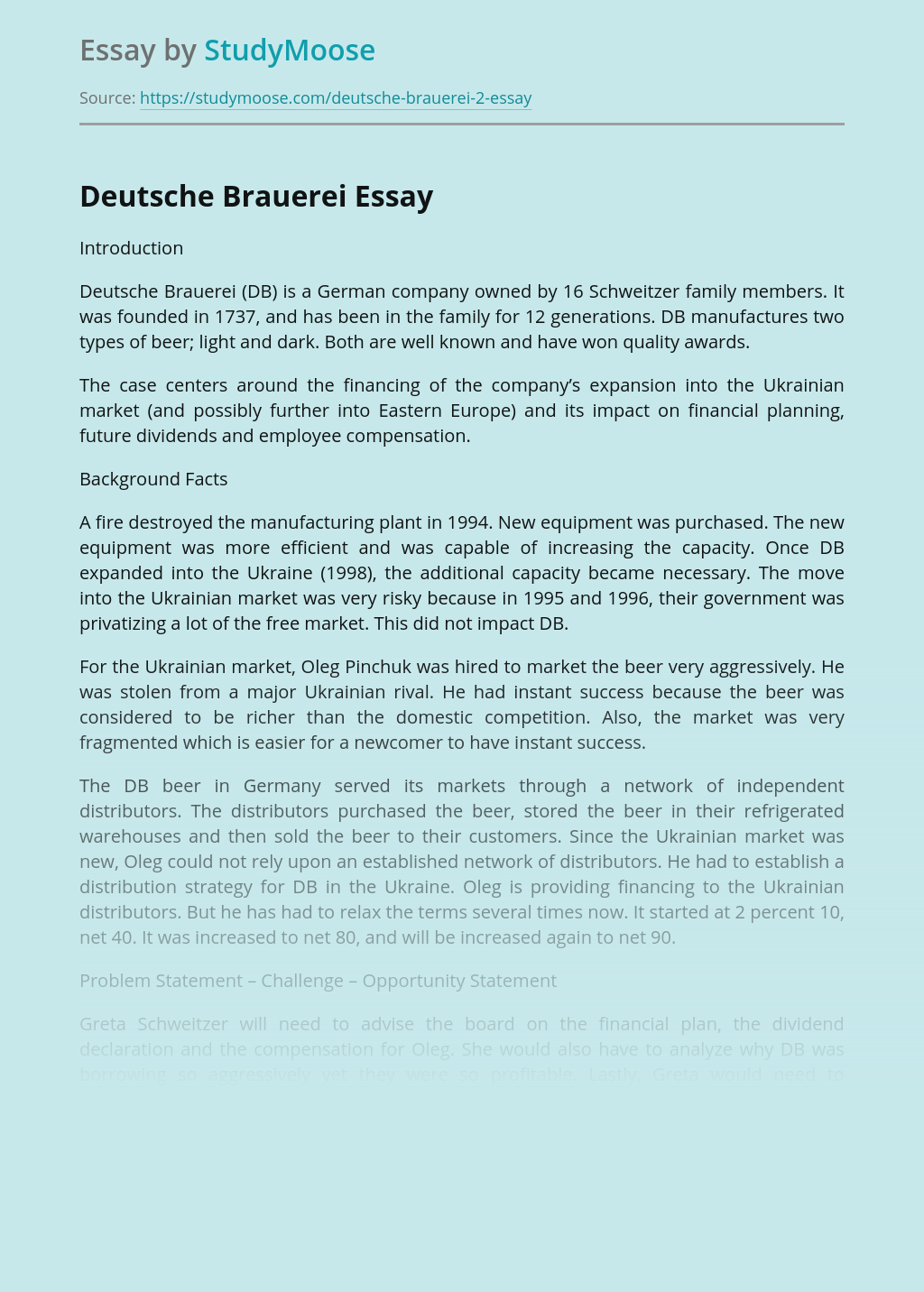 Turn in your highest-quality paper
Get a qualified writer to help you with
“ The Financing Of The Deutsche Brauerei’s Expansion Into The Ukrainian Market ”
Get high-quality paper
Helping students since 2015
Stay Safe, Stay Original