Movie, film or motion pictures, “a sequence of images of moving objects photographed by a camera and providing the optical illusion of continuous movement when projected onto a screen.” (Dictionary.com). A movie is an entertainment that was invented in the mid-19th century and was slowly developed in the early 1900s. At the beginning, a movie was just a simple entertainment without any sound, but as technology has progressed, movies had become more and more realistic due to computer programming and effects, which much of the impossible can be done today by just several clicks of the finger.

Although technology has made movie more interesting and dramatic, it also creates the problem of being too realistic and many children or youngsters might be watching something that is not appropriate for their age. Therefore, the MPAA came up with the rating system that informs the parents about the content of the movie that they have to be cautious about. However, many oppose the movie rating system due to the fact that it limits moviemakers’ rights to create movies they want and it is against the First Amendment of the constitution.

The argument continues, but no solution had come up yet that would please both sides.

What is the rating system? The rating system is a system that prevents underage to watch something that is inappropriate or too early for their age; a parents’ tool to know what elements are in the movie to prevent children watching them. There are five different rating levels in the United States, where each serves different purpose and age group.

First rating is G, which stands for general audience. Any movie that is rated G can be watch by any age without any parental guidance or accompany. Second, PG, which means parental guidance is suggested. Some of the PG films might contain some inappropriate words, bad humors, mild horror, and violence. However, PG rating film is still considered to be films that could be view by a mass audience. Third, PG-13, which means parents strongly cautioned.

Films that are rated PG-13 might contain sexual content and foul languages. Fourth, R, which includes hard language, tough violence, nudity within sensual scenes or any kinds of drug use. Parents should be extremely careful to rated R films, and be more serious before letting their children watching the film. Last, NC-17, “this rating declares that the Rating Board believes that this is a film that most parents will consider patently too adult for their youngsters under 17” (Valenti). Many thinks that NC-17 means the film is pornographic, however, the Rating Board does not have the power to mark films as porn. NC-17 could be violent, sexual or aberrational behavior or drug use in the film. Most of the parents would not want their children to watch any of the NC-17 film, due to its content and language.

Despite the fact the existence of the rating system is for a good purpose to prevent children from watching scenes that are inappropriate for them, many filmmakers still argue and complain about the unfairness of the system. Due to the fact that “Nudity can get you a PG as long as it’s in a pristine jungle setting with no men around; if the nudity comes in a sexual setting, it’s generally an R” (Attanasio), many filmmakers are restricted and cannot freely express their ideas because they are afraid that the film might be labeled as NC-17; “The threat of an NC-17 has forced innumerable filmmakers back to the editing room to cut out scenes Valenti and his board of anonymous film raters don’t like” (Shales) . The main reason film makers are afraid of being labeled as NC-17 is because “Newspaper, television and radio stations refuse to carry ads for, review of, stories about X-rated films. Theater refuses to play them, and distributors refuse to handle them.” (Sheinfeld). Thus, filmmakers make sure that their film passed the board’s examination and make the film be rated R so that the audience would be a lot bigger.

Also, many filmmakers argued that whenever something sexual appear in the film, it is more likely to be rated NC-17 then movies that are brutally violent; “Generally the rating board seems more tolerant of violence than sex-full frontal nudity is usually an automatic X, while lot of heads have to roll before a film will be rated X for violence” (Attanasio). Attanaio even points out that if movies are rated, novels should be rated too. By fighting back at filmmakers’ complains, the board stated that “no one is forced to submit a film to the board for rating, but the vast majority of producers/distributors do in fact submit their films for rating. Any producer/ distributor who want no part of any rating system is free to go to the market without any rating at all” (Valenti). However, most of the films are still rated due to the fact that major chain theaters like AMC will not play any movie that are unrated, thus many filmmakers has to suppress their creativity and follow the MPAA’s rules.

“The basic mission of the rating system is a simple one: to offer to parents some advance information about the movies so that parents can decide what movies they want their children to see or not to see” (Valenti), the purpose of the rating system was to mean good, although it created some inconveniences and interfered many filmmakers’ creativity and right to express themselves, the rating system is still helping parents preventing children to watch inappropriate content, “poll results show that 76% of parents with children under 13 found the ratings to be “very useful” to “fairly useful” (Valenti). Thus, in order to please the parents and filmmakers, it is necessary to have a new rating system, which is more specific and will allow parents to choose what the children will be viewing and gives filmmakers space to use their creativity. 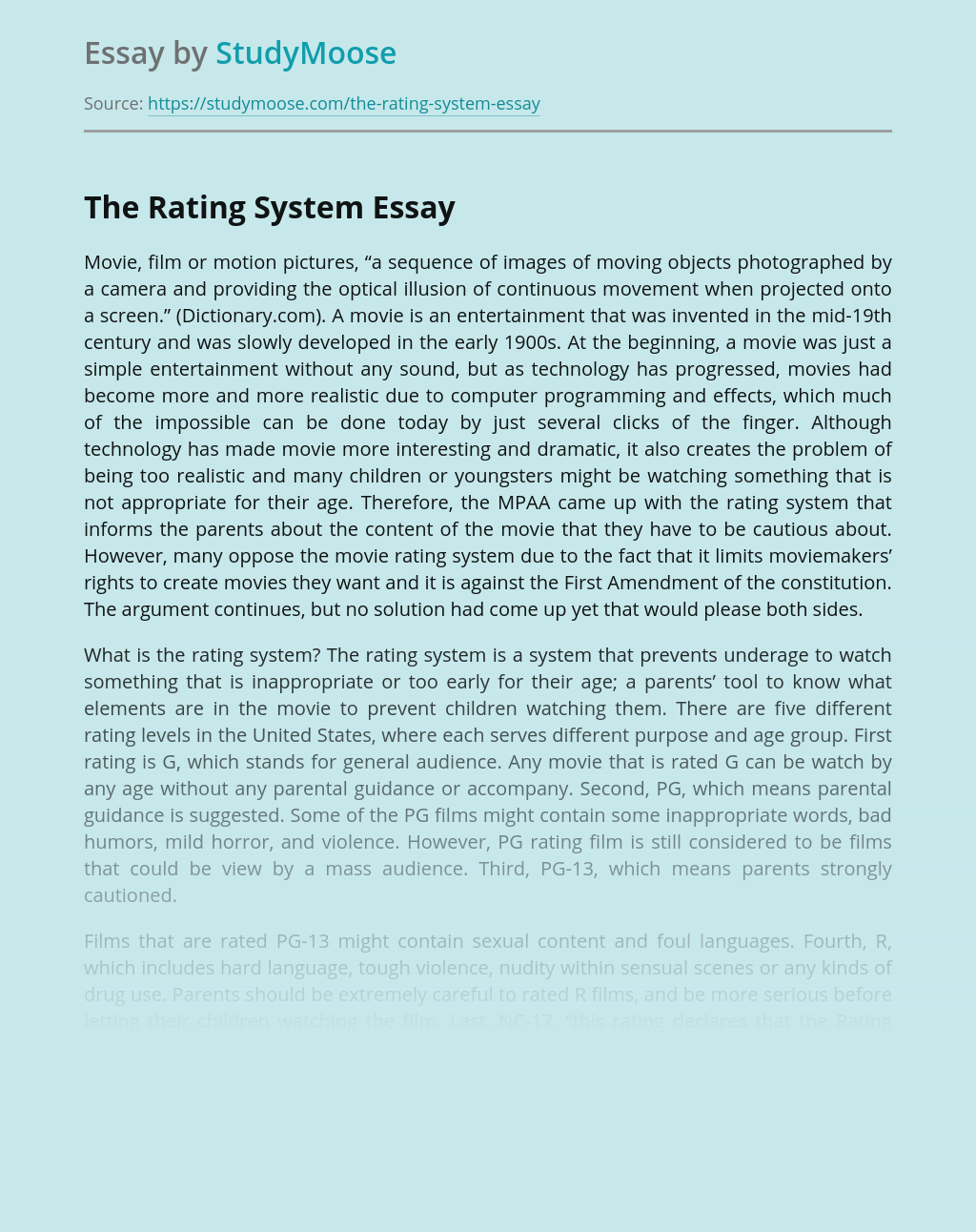 Don’t waste time
Get a verified expert to help you with The Film Rating System
Hire verified expert
$35.80 for a 2-page paper
Stay Safe, Stay Original