The second half of the 20th century began with an important realization that chemicals used in everyday life can indeed have a negative impact on the environment. With that realization came an even greater one, in which it was found that the emissions of pollutants into the atmosphere did indeed have an impact on the global climate. ‘The recognition that the environment is (collectively) a fragile organism that is in need of legal protection did not occur until the 1960s.

Don't use plagiarized sources. Get your custom essay on
“ The Federal Water Pollution Control ”
Get custom paper
NEW! smart matching with writer

At that time, numerous influences including: a growing awareness of the unity and fragility of the biosphere, increased public concern over the impact of industrial activity on natural resources and human health, the increasing strength of the regulatory state, and the success of various movement to protect the environment led to a collection of laws in a relatively short period of time’ (Speight, 2017 p.

‘As a result, unprecedented efforts were then made to reduce all global emissions of all chemicals in order to maintain a green perspective though the evolution of environmental-oriented thinking was followed by the formulation and passage of environmental regulations’ (Speight, 2017 p. 1). The first legislation put into place in attempt to regulate and control pollution was established as early as 1924, known as the Oil Pollution Act (which was later amended in 1990). This was followed by the Federal Water Pollution Control Act of 1948. Once it was realized that there was a need, numerous pieces of legislation all passed rather quickly in an effort to help protect the environment.

These included regulations such as the amendment of the Federal Water Pollution Control Act in 1972, along with the creation of the Clean Air Act of 1970 and the Safe Drinking Water Act of 1974.

The Oil Pollution Act of 1924 (33 U.S.C.) is a United States federal statute establishing regulations for coastal navigable waters with regards to intentional fossil fuel discharges from seagoing vessels. The Act of Congress grants the Secretary of War authority to evaluate the oil volume discharge from a vessel while assessing if coastal navigable waters have a potential toxicity posing a deleterious condition for human health and seafood contamination. The 1924 United States statute provides judicial penalties encompassing civil and criminal punishment for violations of the prescribed regulations as stated in the Act. The legislation was passed by the 68th United States Congressional session and confirmed as a federal law by the 29th President of the United States Warren G. Harding on June 7, 1924.

The Clean Water Restoration Act of 1966 amended the 1924 public law requiring vessel ownerships to recover oil discharges in relationship to the adjoining shorelines and navigable waters of the United States. The 1966 amendment designated the authority of the Act to the U.S. Department of the Interior with a provision allowing enforcement activities by the United States Armed Forces. The federal statute was passed by the United States 89th Congressional session and enacted into law by the 36th President of the United States Lyndon Johnson on November 3, 1966. The OPA was later amended again in 1990.

“The Oil Pollution Act (OPA) of 1990 streamlined and strengthened EPA’s ability to prevent and respond to catastrophic oil spills. A trust fund financed by a tax on oil is available to clean up spills when the responsible party is incapable or unwilling to do so. The OPA requires oil storage facilities and vessels to submit to the Federal government plans detailing how they will respond to large discharges” (2019).

“The Federal Water Pollution Control Act of 1948 was the first major U.S. law to address water pollution. Growing public awareness and concern for controlling water pollution led to sweeping amendments in 1972. As amended in 1972, the law became commonly known as the Clean Water Act” (2017).

The Clean Water Act (CWA) establishes the basic structure for regulating discharges of pollutants into the waters of the United States and regulating quality standards for surface waters. The basis of the CWA was enacted in 1948 and was called the Federal Water Pollution Control Act, but the Act was significantly reorganized and expanded in 1972. “Clean Water Act” became the Act’s common name with amendments in 1972. Under the CWA, EPA has implemented pollution control programs such as setting wastewater standards for industry. EPA has also developed national water quality criteria recommendations for pollutants in surface waters (2017).

The 1972 amendments accomplished the following: established the basic structure for regulating pollutant discharges into the waters of the United States and gave EPA the authority to implement pollution control programs such as setting wastewater standards for industry. They also have maintained existing requirements to set water quality standards for all contaminants in surface waters as well as made it unlawful for any person to discharge any pollutant from a point source into navigable waters, unless a permit was obtained under its provisions. Lastly, amendments have funded the construction of sewage treatment plants under the construction grants program and recognized the need for planning to address the critical problems posed by nonpoint source pollution (2017).

The Air Pollution Control Act of 1955 was the first federal legislation involving air pollution. This Act provided funds for federal research in air pollution. The Clean Air Act of 1963 was the first federal legislation regarding air pollution control. It established a federal program within the U.S. Public Health Service and authorized research into techniques for monitoring and controlling air pollution. In 1967, the Air Quality Act was enacted in order to expand federal government activities. In accordance with this law, enforcement proceedings were initiated in areas subject to interstate air pollution transport. As part of these proceedings, the federal government for the first time conducted extensive ambient monitoring studies and stationary source inspections. The Air Quality Act of 1967 also authorized expanded studies of air pollutant emission inventories, ambient monitoring techniques, and control techniques (2017).

The enactment of the Clean Air Act of 1970 (1970 CAA) resulted in a major shift in the federal government’s role in air pollution control. This legislation authorized the development of comprehensive federal and state regulations to limit emissions from both stationary (industrial) sources and mobile sources. Four major regulatory programs affecting stationary sources were initiated: the National Ambient Air Quality Standards (NAAQS, pronounced “knacks”), State Implementation Plans (SIPs), New Source Performance Standards (NSPS), and National Emission Standards for Hazardous Air Pollutants (NESHAPs). Furthermore, the enforcement authority was substantially expanded. The adoption of this very important legislation occurred at approximately the same time as the National Environmental Policy Act that established the U.S. Environmental Protection Agency (EPA). The EPA was created on December 2, 1970 in order to implement the various requirements included in these Acts (2017).

Major amendments were added to the Clean Air Act in 1977 (1977 CAAA). The 1977 Amendments primarily concerned provisions for the Prevention of Significant Deterioration (PSD) of air quality in areas attaining the NAAQS. The 1977 CAAA also contained requirements pertaining to sources in non-attainment areas for NAAQS. A non-attainment area is a geographic area that does not meet one or more of the federal air quality standards. Both of these 1977 CAAA established major permit review requirements to ensure attainment and maintenance of the NAAQS (2017).

Another set of major amendments to the Clean Air Act occurred in 1990 (1990 CAAA). The 1990 CAAA substantially increased the authority and responsibility of the federal government. New regulatory programs were authorized for control of acid deposition (acid rain) and for the issuance of stationary source operating permits. The NESHAPs were incorporated into a greatly expanded program for controlling toxic air pollutants. The provisions for attainment and maintenance of NAAQS were substantially modified and expanded. Other revisions included provisions regarding stratospheric ozone protection, increased enforcement authority, and expanded research programs (2017).

The Safe Drinking Water Act of 1974

The Safe Drinking Water Act (SDWA) is the federal law that protects public drinking water supplies throughout the nation. Under the SDWA, EPA sets standards for drinking water quality and with its partners implements various technical and financial programs to ensure drinking water safety (2017). The Safe Drinking Water Act (SDWA) was originally passed by Congress in 1974 to protect public health by regulating the nation’s public drinking water supply. The law was amended in 1986 and 1996 and requires many actions to protect drinking water and its sources rivers, lakes, reservoirs, springs, and ground water wells. (SDWA does not regulate private wells which serve fewer than 25 individuals.) SDWA authorizes the United States Environmental Protection Agency (US EPA) to set national health-based standards for drinking water to protect against both naturally occurring and man-made contaminants that may be found in drinking water. US EPA, states, and water systems then work together to make sure that these standards are met. Millions of Americans receive high quality drinking water every day from their public water systems, (which may be publicly or privately owned). Nonetheless, drinking water safety cannot be taken for granted (n.d). 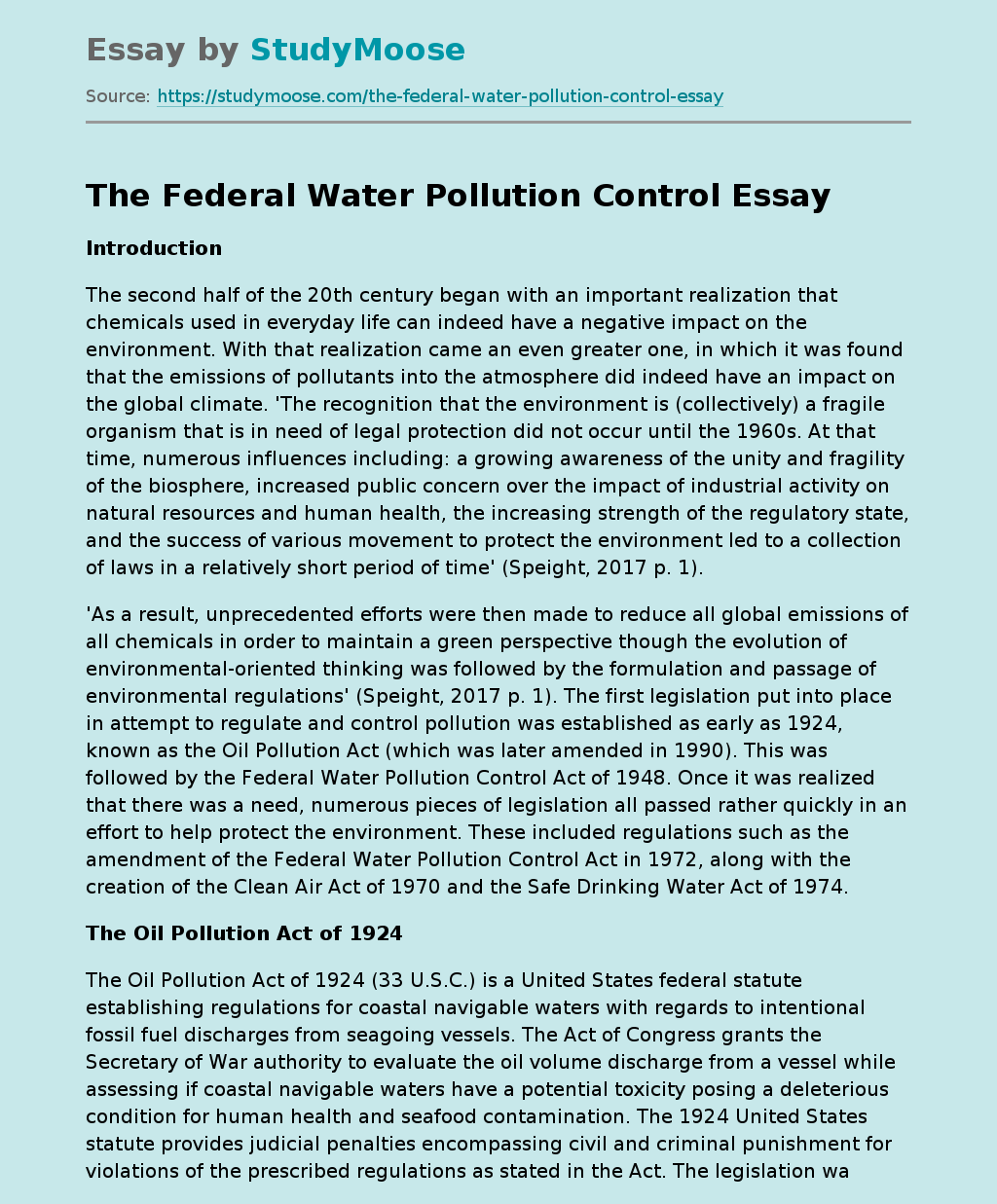