The early Roman state was founded in 509 B.C after the romans drove out the Etruscan king. Rome was known to be the center of the world which lasted for several centuries and the thought of such a worldwide power could decline was unheard of. Rome started out from a cluster of villages and into a great empire. It covered most of Europe, North Africa and parts of Asia. It was so powerful and seemingly unstoppable but as the aspects that made Rome so dominant started to fade, led Rome to fall.

Don't use plagiarized sources. Get your custom essay on
“ Christianity in Roman Empire ”
Get custom paper
NEW! smart matching with writer

There are many theories in which led up to the fall of Rome in 476 C.E. Some of which are Christianity, the Eastern Empire, and economic problems. Most of the problems that contributed to the fall of Rome had come from within the city; political, economic, and religious factors to be specific. Although it was slow process of decay for the Roman Empire, Christianity played a big factor. It was appealed to the majority of the people of the Roman Empire.

It was something new for the Romans to put their faith in which led Christianity to spread, eventually leading it to be first legalized in 313 and then becoming the states religion in 380. Christianity gave Romans a cause and it stressed the ideal of striving for a goal. When Christianity came into play it displaced the current religion of Polytheistic. Polytheistic religion gave the emperor an important status thus giving him the impression that Christianity was becoming a threat.

Many romans had committed their faith to Christianity and it became important to their daily life. Once the Roman Emperors denied the right of free worship, Romans became angered. This led to many social problems as Romans objected to Roman politics. The Christian belief was in one God who was not the emperor, in which weakened the power and authority of the emperor. When the emperors chose to outlaw Christianity this became a major problem that contributed to the fall of Rome. The Roman Empire was a vast city was spreading everywhere. The government however, was designed to control a city state and not a giant empire.

Unable to control the vast area, two capitals were created with its own leader and they were called the Eastern and Western Empire. The division of the Roman Empire made things easier to control and govern. East and west failed to work together to combat outside threats thus weakening the divisions. Over time the east thrived while the west declined. The western was much weaker than the eastern and it fell in 400 AD. However, the Eastern Empire and its soldiers lost trust of the emperors thus leaving the general to run and control everything. With the generals trying to find a way to overthrow the emperor, it led to an Empire that couldn’t be controlled. Romans weren’t pleased with the way the Eastern Empire was being run, thus leaving Rome to be ruled by its people.

The economy was an important thing in the Roman Empire. Without a strong economy an empire cannot function at its best. Rome was going through a financial crisis in which the government had many debts to pay. Rome had never developed a system efficient enough to make money. Many things had to be funded for example the roads that were built, construction and maintenance of its army. Inflation and taxation caused money to become worthless, therefore separating the poor and rich. Some member of the wealthy class fled to avoid the tax man. Routes were no longer up to part so it became difficult and dangerous to transport good to the markets. The flow of trade was being disrupted by piracy an attacks from outsiders. Trade was declining as people chose to grow their own good instead of buying and trading them.

Farming was Rome’s main economic boost and because the routes remained unrepaired, eventually small farmers died out and their main economic boost was lost. A decline in good led to higher food prices. The wealth of the Empire was declining so the government decided to create coins with less silver content. The army could no longer be afforded as dedicated and patriotic soldiers were replaced with cheaper and less reliable soldiers. Rome was not built in a day, therefore couldn’t be destroyed in a day. Every decision that was made all had an effect on Rome, in which led to it fall in 476 C.E. It was all a combination of Christianity, the Eastern Empire, and the economic struggles. Although there are many more factors that contributed to the fall of the Roman Empire I believe these three are the foundation for the fall.. Rulers that didn’t know how to rule caused many political problems.

Poor management of the roads due to the lack of fund from the government created a big effect on the economy. I believe that if the right leadership skills were to be applied, then the reign of Rome could have been prolonged. Internal and external factors all contributed to the fall of the Roman Empire. Who would of thought that such a strong empire would fall? I believe that the economy played the center role in the fall. What’s an empire if the economy isn’t functioning right? Money is something that was needed but wasn’t there when needed due to the fact that there was no efficient system that brought and income in.

The government had no money to fund the roads in which created trade. How could the people trade if they were risking their lives on the roads? I believe that with such a strong empire, they needed to more so focus on a steady source on income in order to fund everything in the cities. With no money caused inflation. Inflation caused products that were already hard to purchase even harder. Farmers could not produce and pay their workers because no one was buying their good due to the high inflation of prices. Therefore resulting in workers being paid in food and clothing. I believe that without a strong economy then one cannot have a strong army, or be able to function at its best. This was all due to rulers who had no common sense. 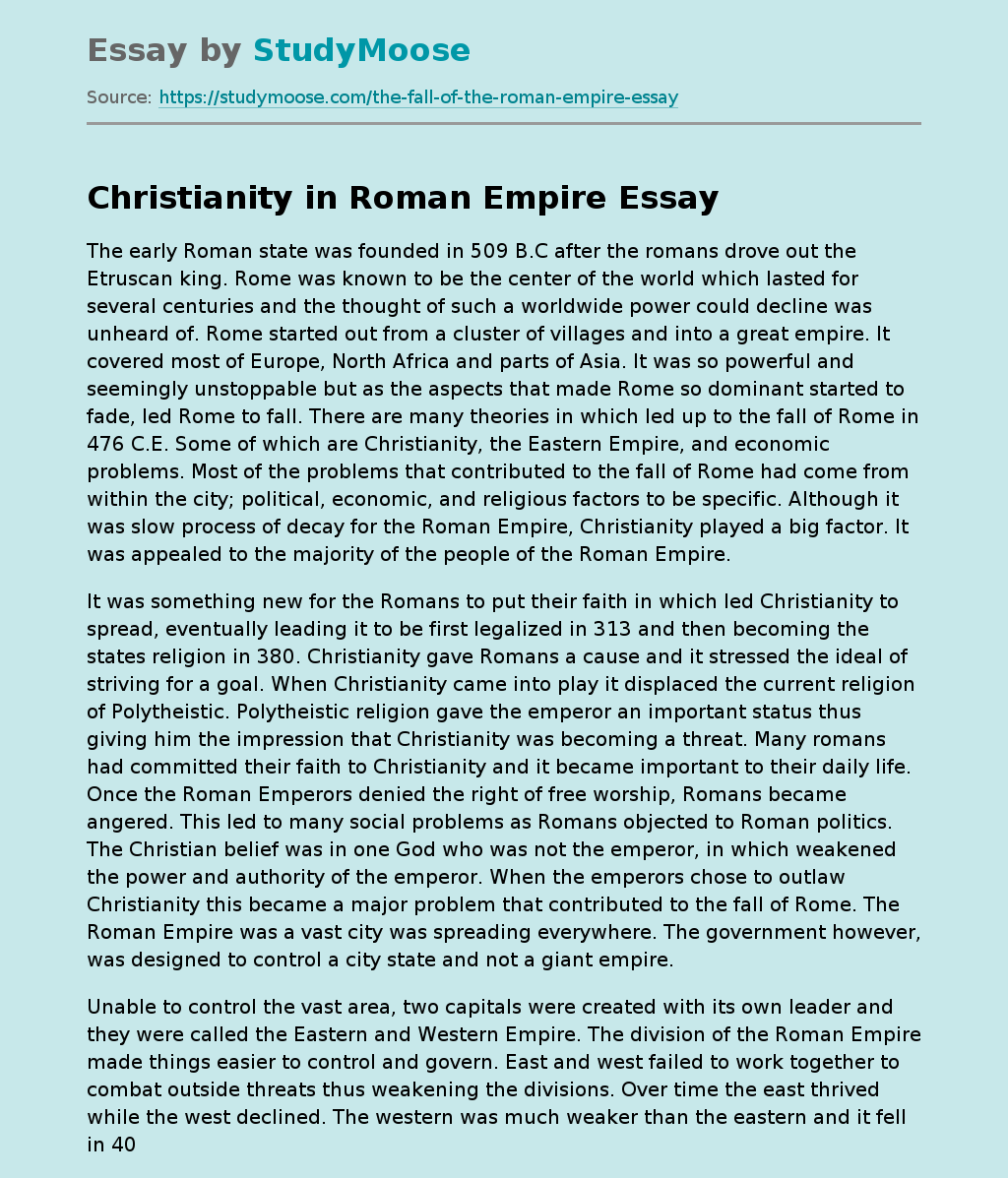