The Fall of the House of Usher Movie vs Short Story

Most readers of Edgar Allan Poe’s short story, “The Fall of the House of Usher”, will notice some obvious changes in Roger Corman’s movie, The Fall of the House of Usher. In the film, Philip Winthrop traveled to the House of Usher, a grim mansion surrounded by a tarn, for his fiancee Madeline Usher. Madeline’s brother Roderick opposed Philip’s intentions of getting married to Madeline and taking her back to Boston with him. He told Phillip that the Usher family is afflicted by a cursed bloodline which made all their ancestors mad, criminals, etc.

Don’t waste time
Get a verified expert to help you with The Fall of the House of Usher Movie vs Short Story
Hire verified expert
$35.80 for a 2-page paper

He did not want the evils to spread through Madeline and Phillips “future children”. Philip felt that he could not see Madeline and himself endure much more, so he finally convinced Madeline into going with him. When everything is settled, she got into an argument with her brother and she suddenly “dies”. She was laid to rest in the family vault by Philip and Roderick.

When Philip was getting ready to leave, the butler said Madeline suffered from catalepsy (a condition which can make people appear dead). Philip hurried to open Madeline’s coffin and found it empty.

He desperately searched for her in the huge mansion which consisted of many hidden passages. Meanwhile, Madeline, who was completely mad, made her way to her brother. She tried to get revenge by killing him but they both die as a fire breaks out. Philip escaped and saw the house sink into the tarn surrounding it.

Poe used vivid imagery supported by very descriptive details. He established the mood with specific word choice, “There was an iciness, a sinking, a sickening of the heart—an unredeemed dreariness of thought which no goading of the imagination could torture into aught of the sublime.

What was it—I paused to think—what was it that so unnerved me in the contemplation of the House of Usher? “(pg. 65) All three of the characters suffered from madness and gloom, evidently brought on by the forlorn setting. Poe’s description of the house and then comparing it to his description of its inhabitants, Roderick and Madeline Usher, gave the readers a feeling of terror and gloom. Corman’s film implied that the house itself was the monster. Viewers saw this throughout the film, by the objects falling mysteriously, the houses’ constant trembling, the eerie sounds etc.

The role of the narrator was eliminated in the film, so the viewers had to make conclusions and descriptions based on what the viewers might have seen. This is a challenging task because the viewers were so caught up in the movie that the viewers might have not noticed a few things which would have otherwise been explained and described in the short story. In the short story Roderick asked for Phillip, through a letter. Roderick was sick and wanted comfort and company. Poe’s story was captivating and creepy but Corman changed the story and made Madeline and Phillip lovers.

The story and the film both depicted the siblings’ illness the same way. The film also implied that Roderick may have viewed Philip as a romantic rival, which suggested an incestuous relationship between Madeline and Roderick. They were not regarded as twins in the film and were not at all similar. In the film, Phillip was preoccupied with Madeline and fear. In the story, he spent most of his time reading, painting, and listening to Roderick’s music. His whole purpose of being there was to cheer Roderick up.

In the story, Madeline was barely mentioned or known of until the end. In the film, she was a critical character and essential to the plot of the movie. The foreshadowing in the film was much more predictable than in the short story because it was easier for the viewers to see and feel what was coming next. After viewing the film, readers still felt that the book painted a broader picture because of Poe’s use of descriptive detail. Throughout the film, there was a strong sense of anticipation and excitement which added to the suspense of the plot.

The Fall of the House of Usher Movie vs Short Story. (2016, Dec 28). Retrieved from http://studymoose.com/the-fall-of-the-house-of-usher-movie-vs-short-story-essay 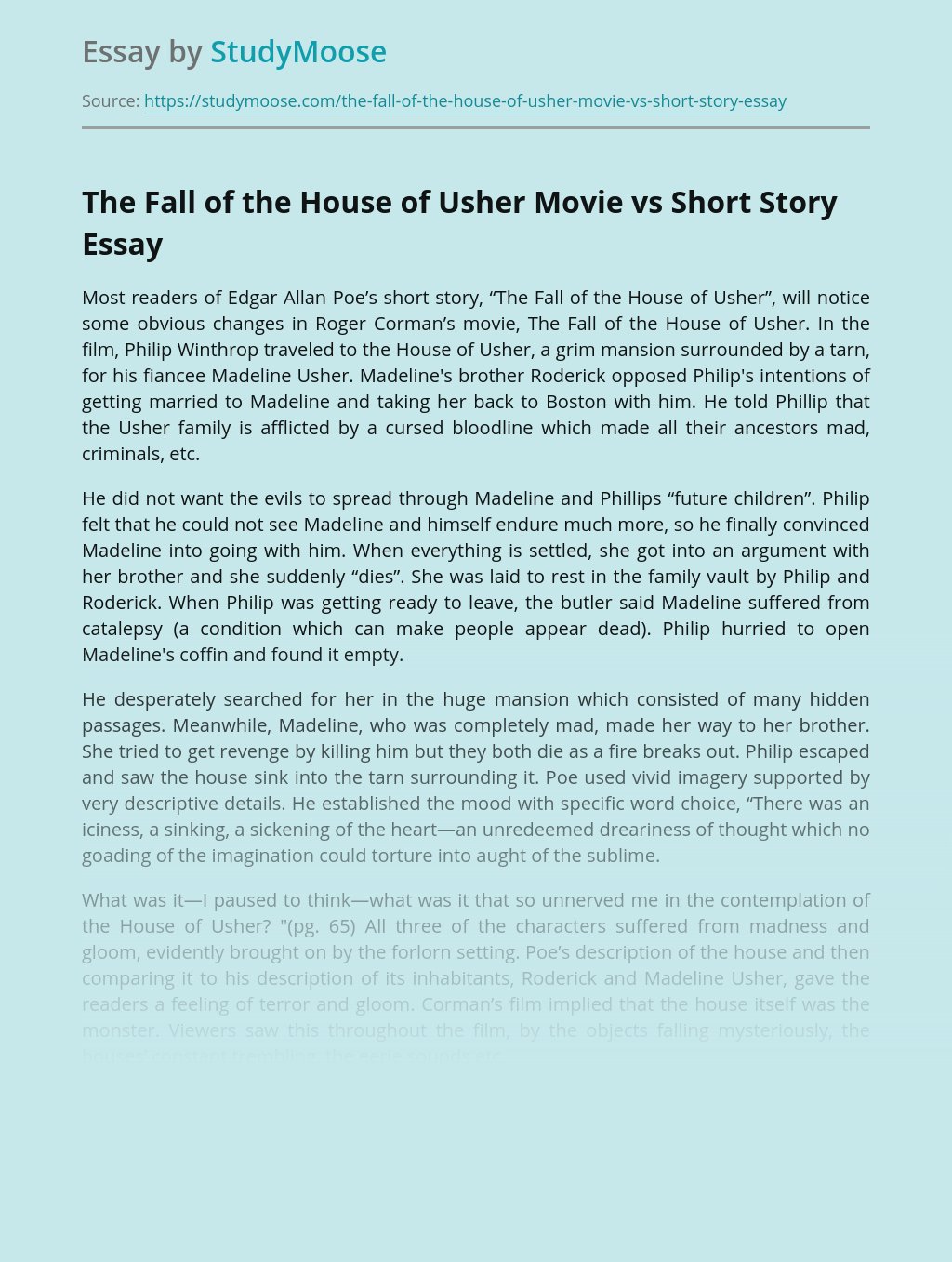 Don’t waste time
Get a verified expert to help you with The Fall of the House of Usher Movie vs Short Story
Hire verified expert
$35.80 for a 2-page paper
Stay Safe, Stay Original