The Extreme Detriments of Colonization in Gulliver's Travels, a Book by Jonathan Swift

In the final part of Gulliver’s Travels, Gulliver concludes, “[T]hey go on Shore to Rob and Plunder; they see an harmless People, are entertained with Kindness, they give the Country a new Name, they take formal Possession of it for their King… they murder two or three Dozen of the Natives, bring away a Couple more by Force for a Sample, return home, and get their Pardon. Here commences a new Dominion acquired with a Title by Divine Right,” (Swift 269).

Don't use plagiarized sources. Get your custom essay on
“ The Extreme Detriments of Colonization in Gulliver’s Travels, a Book by Jonathan Swift ”
Get custom paper
NEW! smart matching with writer

Especially during the time that Jonathan Swift wrote Gulliver’s Travels, this statement regarding the detriments of colonization was very extreme. Eventually, the masses did begin to adopt similar beliefs that the capturing and enslavement of native people was wrong, but very few failed to justify it by believing it was in the best interest of their country’s imperialistic desires. Here, Swift sees past this justification by framing colonization as a criminal enterprise instead, vindicated by the state for the progression of military and trade power.

Through the discourse of Gulliver’s Travels, Gulliver transforms the way he views the world through his encounters with many strange people. The way in which Gulliver is forced to look at himself and his role among the Houyhnhnms and the Yahoos through both scientific observation and human reflection leads Gulliver to find himself in an intriguing dichotomy of perspectives as both “the conqueror” and “the conquered,” thus leading him to this deep-seated supposition concerning colonization.

In the beginning of Part IV when Gulliver arrives in the land of the Houyhnhnms and the Yahoos, their appearance quickly becomes an important facet of Gulliver’s perspective as “the conqueror.

” When he first discovers the Yahoos, he very closely notes their form, which seems very bizarre to him: “Their Heads and Breasts were covered with a thick hair… they had Beards like Goats, and a long ridge of Hair down their Backs… They climbed high Trees, as nimbly as a Squirrel, for they had strong extended Claws before and behind, terminating in sharp points, and hooked…,” (Swift 207). Gulliver establishes himself as a conqueror here in his very careful description of the creatures, depicting them as beasts who differ a great deal from himself. In addition, Gulliver makes a large point to describe just how distasteful these creatures are: “Upon the whole, I never beheld in all my Travels so disagreeable an Animal, nor one against which I naturally conceived so strong an Antipathy,” (Swift 207).

Likewise, the description and framing of the customs and attributes of the animals Gulliver chances upon in Part IV of Gulliver’s Travels effectively establish Gulliver’s role as “the conqueror.” For example, he describes an activity in which the Houyhnhnms participate that details how they would take a Yahoo and put him in a corner, where he would refuse food and water although he needed them greatly. They found that the only solution to have the Yahoo accept nourishment was to “… set him to hard Work, after which he would infallibly come to himself,” (Swift 242). Here, Gulliver explains these customs of the capturing and enslavement of a creature in quite a straightforward manner, assuming his role as “the conqueror” as he finds these practices to be perfectly rational and acceptable. Similarly, Gulliver describes with disgust the Yahoos’ lack of ability to learn, attributing it to “… a perverse, restive Disposition. For they are cunning, malicious, treacherous and revengeful,” (Swift 244). Once again, Gulliver establishes himself as “the conqueror” by removing himself from these animals’ situation in his matter-of-fact explanations of the ways in which they behave and exist, lending him a unique perspective to consider later in his accounts.

Promptly after Gulliver establishes himself as victor and factual reporter of a newly found land, coexisting peacefully as one of the Houyhnhnms, he startlingly finds himself instead as one of the Yahoos. When he observes a female Yahoo raging after him when he undresses and tries to bathe, the reader can almost gasp along with Gulliver as he becomes conscious that, “For now I could no longer deny, that I was a real Yahoo, in every Limb and Feature, since the Females had a natural Propensity to me as one of their own Species,” (Swift 245). From here, Gulliver is stuck in a strange sort of cognitive dissonance between what he knew himself to be before – a white Englishman who is meant to conquer and claim new lands for England – and what he sees he actually is – a disgusting, uncivilized creature that belongs among the barbarous Yahoos. Once he makes this immense realization, the Houyhnhnms too become aware of who they are allowing to live among them and quickly create a plan to exhort Gulliver from their land.

Although some great differences exist between the two pieces, a striking parallel can be drawn between Gulliver’s situation with the Houyhnhnms in Gulliver’s Travels and that of James Baldwin in his brief essay Stranger in the Village. In this narrative, Baldwin describes the complex coexistent relationship between “the American” and “the black man”: “Thus it is impossible for Americans to accept the black man as one of themselves, for to do so was to jeopardize their status as white men. But not so to accept him was to deny his human reality, his human weight and complexity,” (Baldwin 6-7). Gulliver recounts similar circumstances as the Houyhnhnms begin to understand that Gulliver is not one of them, but rather a Yahoo, and they become disillusioned with the fact that Gulliver exists among them still as he threatens their status as moral, righteous creatures. The reason the Houyhnhnms choose to do this to Gulliver may be very similar to the reason Baldwin attributes to the Americans for his alienation, as well: “The black man insists, by whatever means he finds at his disposal, that the white man cease to regard him as an exotic rarity and recognize him as a human being… the white man prefers to keep the black man at a certain human remove because it is easier for him thus to preserve his 1 However, it is important still to note a difference between these two situations as well: while Gulliver’s assertions that he indeed belongs among the Houyhnhnms, as he is disgusted by his realization that the human race is, in reality, a race of Yahoos, it is quite up for debate whether or not he actually belongs among the Houyhnhnms. However, most can agree that Baldwin’s assertions are true that he is just like any white man in every facet of his qualities of humanity and that he belongs among white men, not separated from them. simplicity…,” (Baldwin 4). The Houyhnhnms’ reason to exile Gulliver is similar to this because Gulliver also desires to be seen as one of the Houyhnhnms and not an “exotic rarity,” but the Houyhnhnms very well may have preferred to keep Gulliver away because it was easier for them to preserve their peaceful, ethical way of life that way. These possibilities are ones to consider, and strengthen the effect of the role reversal Gulliver experiences at this point in Swift’s satire, lending Gulliver an important perspective.

Gulliver’s wrenching experience among “the conquered” when he was once – and still is – “the conqueror” is furthered by Gulliver’s experience in getting exhorted from the land of the Houyhnhnms. Unlike his previous happenstances in which he was more than happy to leave, Gulliver is instead eager to stay, disgusted by his native human race. For example, after Gulliver is informed that he is being banished, he says, “I was struck with the utmost Greif and Despair at my Master’s Discourse, and being unable to support the Agonies I was under, I fell into a Swoon at his Feet,” (Swift 257). Perhaps it is because he is eventually exiled that he gains an understanding of what it is like to be forced out of a comfortable place, as indigenous people are by those who come to conquer. Even more so, however, Gulliver gains an understanding of the desire for fundamentally good native peoples to banish an alien who may claim his/her Divine Right and force the natives out of their homeland.

This “conquered” perspective that Gulliver becomes extremely familiar with by the time he is banished from the land of the Houyhnhnms beguilingly vies against Gulliver’s primitive inclinations to conquer the places he once looked down on as “exotic rarities” himself. At first, he is nearly in a position that Columbus was once in, coming from a land of wealth and prosperity to less developed nations that are simply intrigues to add to the curiosity cabinet. Additionally, he is removed from them in his relatively methodical description of their appearance, customs, and behaviors. When he finally begins to see that he is just another Yahoo, futilely pretending to be even half as rational as the Houyhnhnms, for the first time the reader and Gulliver alike are forced to look not through Gulliver’s eyes at the creatures he encounters, but rather at Gulliver and his role among them. This stark juxtaposition allows Gulliver a standpoint in which he belongs to both perspectives and neither perspective at the same time, stuck in an indeterminate state in which he could step on either side with compelling insight because he has experienced both viewpoints. Ultimately, his time as “the conquered” makes a larger impact on him, as Gulliver concedes that colonization is a corrupt initiative that is not just in its endeavors to better the state of the nation. This enduring display of how changes in perspective can enlighten humankind is one of the most important reasons Gulliver’s Travels has survived for almost four centuries. Even in our modern lives today, we should consider looking upon this dichotomy of symbiotic perspectives as an example to apply to the important decisions we make every day. It is of the utmost importance that we continue to make an effort to thoroughly understand both sides of a particular matter in order to continue to better the world for all, perhaps aspiring to achieve at least some level of the concept and regard for morals of that of the Houyhnhnms.

The Extreme Detriments of Colonization in Gulliver's Travels, a Book by Jonathan Swift. (2021, Sep 24). Retrieved from http://studymoose.com/the-extreme-detriments-of-colonization-in-gulliver-s-travels-a-book-by-jonathan-swift-essay 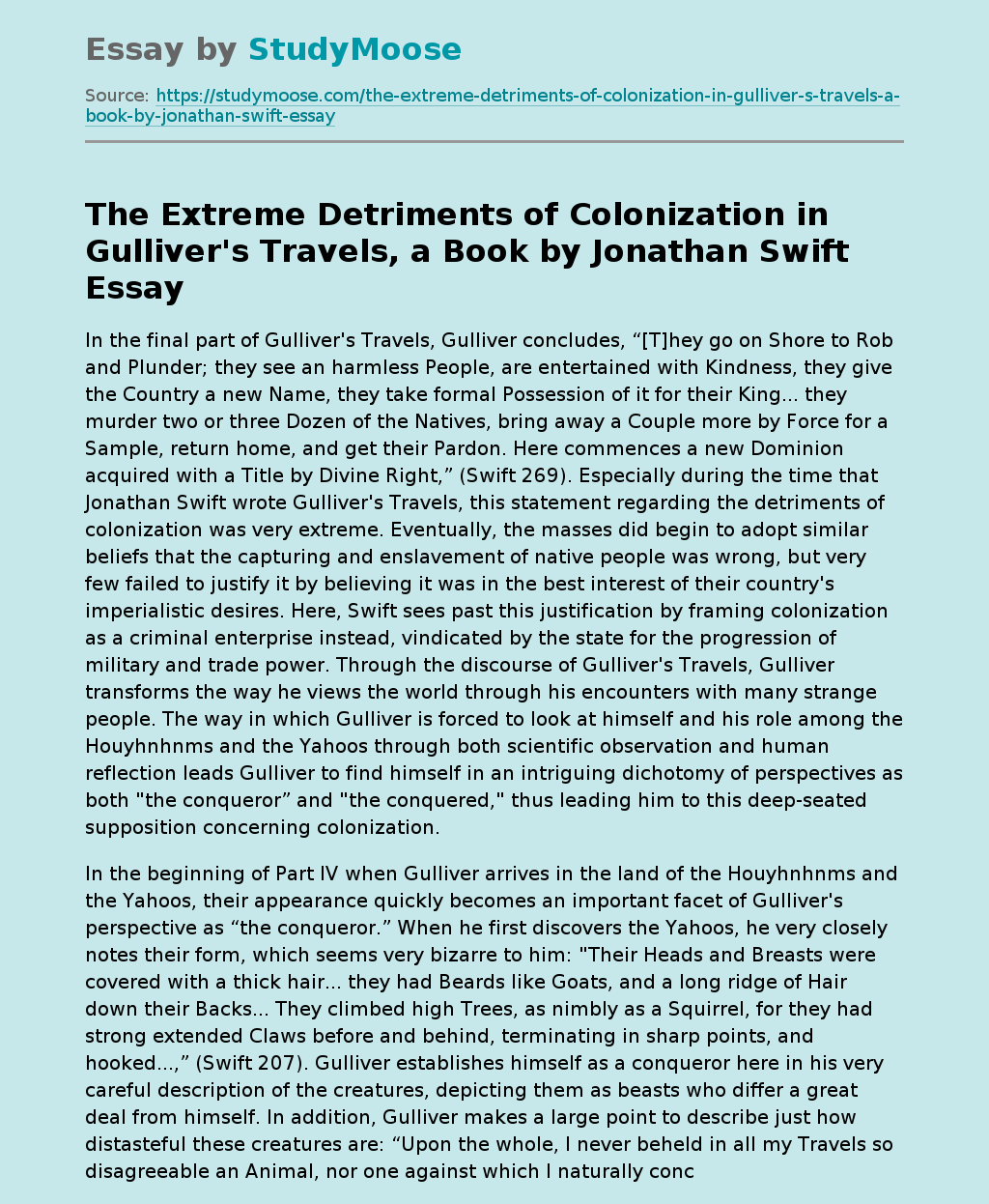