The Existence of the Devil in The Devil and Tom Walker, a Short Story by Washington Irving

The Devil has occupied the minds of mankind to a greater extent than any other character, historical or fictional. From The Book of Genesis to Goethe and Marlowe’s Faust, to Irving’s The Devil and Tom Walker, Satan (or his equivalent has been the focus of deep interest in human affairs, and that interest has always been shared in oral history or through literature. The old German legend of Faust—the main influence for Washington Irving’s The Devil and Tom Walker —tells the story of a man who sells his soul to the Devil, trading eternal peace in the afterlife for today’s worldly gains.

Don't use plagiarized sources. Get your custom essay on
“ The Existence of the Devil in The Devil and Tom Walker, a Short Story by Washington Irving ”
Get custom paper
NEW! smart matching with writer

Irving’s dark descriptive style and depiction of corrupt characters carry the moral message of Faust throughout by using symbolic rhetoric and dark comedy. The Devil and Tom Walker serves as the first American retelling of the Faust legend, withIrvingintroducingnew themes and ideas to American literature in this richly symbolic account of the sin and suffering that shapes American society.

Readers have already been introduced to Irving’s captivating style in The Legend of Sleepy Hollow and Rip Van Winkle. His literary contributions, which spanned throughout the first half of the 19th century, delivered a body of literature with which Americans could identify. Through his interest in popular legends, he shows his sympathy with the Romantic movement of Europe; however, The Devil and Tom Walker is a uniquely American tale. Washington Irving sets the mood for The Devil and Tom Walker with talk of “Kidd the pirate,” “ill-gotten money,” the dead, and the Devil.

The story is set in the New England area near Boston, several decades before the story was actually written. The setting is described using vivid dark imagery of an ominous “thickly wooded swamp” over what was once an Indian fort used to protect the Native Americans from attack during their wars with the American colonists.

These familiar areas to the inhabitants provided a uniquely American context for the site of Tom’s meeting with the Devil. In addition, the New England setting highlights Irving’s concern in Tom’s morality. The area was populated by Puritans, Quakers, and Anabaptists, all strict Protestant sects that were highly concerned with man’s depravity and moral consciousness. Each description of setting or character bears a sinister connotation. The “treacherous forest” in which Tom meets Old Scratch is also symbolic of Tom’s character. Through this setting, Irving suggests that if one’s heart is penetrated by greed and pride, one is likely to submit to temptation and be led astray.

Tom was introduced as already being morally corrupt; when he hears that a rich neighbor has died, he declares, “Let the freebooter roast, who cares” (Irving 9). Tom is drawn as “a meager miserly fellow” (Irving 2), while his wife, the main source of his misery, is “tall termagant, fierce of temper, loud of tongue, and strong of arm” (Irving 3). The events in The Devil and Tom Walkerdemonstrate how one’s immoral thoughts breed immoral deeds, escalating to the greatest corruption of all, a pact with the Devil. For a man of no morals, becoming a corrupt moneylender presents no sense of guilt or wronging. In procuringunlimited wealth, Tom feels that the ends justify the means. Selling his soul to the Devil becomes a concern to Tom only after he stops to ponder the afterlife. His conversion to religion, made explicitly for the sake of his own personal profit rather than his faith in God, is another act of moral corruption. All the same, Tom is unable to escape his fate, and Irving clearly identifies the consequences of procuring such “ill-gotten wealth.”

In this regard, the story of everyman’s eternal struggle with the Devil dates back to the story of the temptation of Christ in the wilderness, which serves as a basis for belief in a possible agreement of mutual exchange or relations between man and the Devil. The idea is particularly present in the words of the Devil to Christ, showing him all the glorious kingdoms of the world: “All these things I will give you, if you fall down and worship me” (Matthew 4:8-9). For Tom, the leap into sin brings immediate gains, as he is enticed by the view of the kingdoms of the world from their loftiest peak. This is the Devil’s mode of temptation; he materially and compassionately comes to the weak. According to E.M. Bounds, “That is the devil’s main business — to materialize, earthlyize religion, to get man to live for bread alone, to make earth bigger than heaven. Time is more engaging than eternity” (Bounds 2010).

In Job 1, the Devil questions man’s motives and loyalty to God: “Does Job fear God for nothing? Have You not made a hedge about him and his house and all that he has, on every side? You have blessed the work of his hands, and his possessions have increased in the land. But put forth Your hand now and touch all that he has; he will surely curse You to Your face” (1 Job 9 11). It is the Devil’s belief that without material blessings, man would not be so willing to serve God. Thus, it is with this premise that the Devilcomes in the guise of a sympathizer and provides immediate pleasure in exchange for Tom Walker’s soul.Material comfort was the basis of what Tom Walker desired; he was a greedy man and made diabolical decisions that he later regretted, but somehow never really felt remorse for, because he was too blinded by his greed. Irving is illustrating the duality of man, and this duality exists in the moral world of right and wrong, just as it does it the physical world of night and day and of light and darkness. Irving seems to be saying that while God may not exist, the Divine exists; and while the Devil may not exist, the Diabolical undeniably exists. In everyman exists the two simultaneous urges: one towards good and the other towards evil.

The Existence of the Devil in The Devil and Tom Walker, a Short Story by Washington Irving. (2021, Sep 13). Retrieved from https://studymoose.com/the-existence-of-the-devil-in-the-devil-and-tom-walker-a-short-story-by-washington-irving-essay 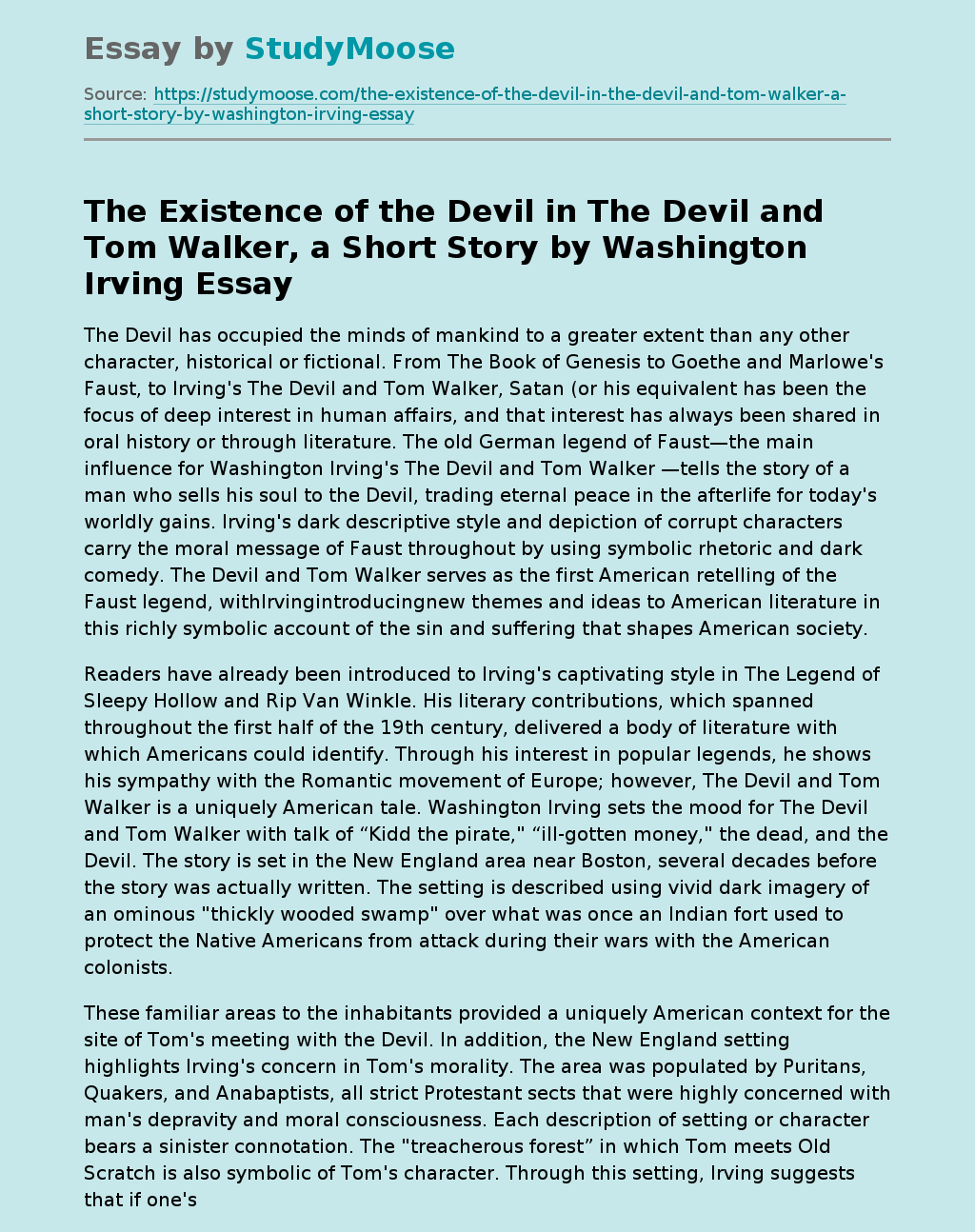