‘’The moment you believe you understand a great work of art, it’s dead for you’’ (Oscar Wilde, cited in World of Quotes) Visual Art is the embodiment of the artist’s perceptions and values. Artists convey private and public interpretation of their work using signs and symbols. The audience identifies signs and symbols found in artworks to create their own meaning. Semiotics is the study of signs and symbols, this understanding can give the viewer a more insightful interpretation towards artwork.

Don't use plagiarized sources. Get your custom essay on
“ The Examination of Leonardo Da Vinci, Andy Warhol and Ron Mueck ”
Get custom paper
NEW! smart matching with writer

The examination of three artists, Leonardo Da Vinci, Andy Warhol and Ron Mueck the specific viewpoints from which they produce their work are expressed. Through the analysis of elements and principles, as well as semiotics the intended meanings of each artist are communicated. The first artist that will be analysed in relation to the use of semiotics and symbolism throughout their work is Leonardo Da Vinci. Leonardo Da Vinci was born in 1452 and was unquestionably the most skilled artist of the Renaissance.

The renaissance was a time period where the values within the society were express through evolving art.

Leonardo used art to express his point of view on religion, politics and society because he was able to imply subtle symbols which denote his thoughts and opinions. The specific artwork by Leonardo Da Vinci that will be discussed is ‘The Last Supper’ (See Appendix 1). His Theme throughout this piece was humanism, ‘depicting God or a Holy figure as a human or at the same level as one, which had never been done before.

’ (Art cyclopaedia, 2011) This artwork took three years to finish, from 1495-1497. This gives the audience a broader appreciation for the piece as the depth and complexness of the artwork is clear.

Symbolism played a key role in Leonardo’s art; ‘The Last Supper’ contains symbols that can be interpreted in a variety of ways. He used these symbols to ultimately express his personal values and beliefs on religion. Leonardo used oil paint to create ‘The Last Supper’ piece. The use of colour and texture are used to display certain facial expression of the characters in the painting. He used these expressions to symbolise the difference between Christ and the Apostles, rather than raising him above the others. The Apostles faces indicate anguish or confusion as they are incapable to accept that someone would deceive Christ.

However, Christ’s facial expression is tranquil and wholesome this symbolises his purity and high power. The use of tone to create lighting as well as shading in ‘The Last Supper’ is very creative. The tone creates certain emphasis and focal points. For example ‘Christ has the light coming in from the windows behind him signifying his purity and holiness’ (Art cyclopaedia, 2011). The most obvious use of symbolism is the principles and elements of design to signify Christ ad a holy figure, although he is presented in regular form. ‘The Last Supper’ portrays Leonardo Da Vinci’s personal perspective on religious viewpoints.

It can be interpreted in many ways which contributes to why it is so complicated. It shows certain history about the concepts of the Renaissance, such as humanism. Through the artistic detail the artists meaning is clear. That with humanism people can realise God gave everyone an equal chance, and social statuses can began to deteriorate. This artwork will influence religious and political outlooks in society for years to come. Andy Warhol is the second artist that will be examined for certain representations of semiotics and use of personal meaning.

Andy Warhol was born in 1928 in Pittsburgh. Warhol was a prominent figure of the Pop art movement. Pop art’s goal was to ‘blur the boundaries between ‘high’ and ‘low’ popular culture’ (The Art Story, 2012). Pop art explores the idea that there is no hierarchy of culture, and that art may borrow from any basis and combine it with many others. Pop art eliminates tones and textures that would otherwise be associated with representations. Warhol mixed a wide variety of art that had different attitudes and meaning to create his Pop art work.

The specific artwork by Andy Warhol that will be focused on is ‘Campbell’s Soup’ (See Appendix 2). To create this artwork Warhol painted the images onto canvas. These paintings were formed by a printmaking silkscreen process in 1962. Warhol embedded a lot of themes and underlying messages throughout his ‘Campbell’s Soup’ series. ‘ He had a positive view of ordinary culture and felt the Abstract Expressionists had taken great pains to ignore the splendour of modernity’(Stokstad, p. 1130). He expressed this view as well as the understanding of commercialisation through his ‘Campbell’s Soup’ series.

Warhol’s Pop art can relate to minimal art in the sense that it attempts to portray objects in their most simple form. He is trying to portray a message to the audience that sometimes we forget to really look at things around ourselves; the everyday routine is too often overlooked and ignored. He used certain elements and principles including emphasis, repetition and colour. Emphasis was shown through the focal point being the packaging on the can. The colours, line and tones all help to emphasis this focal point.

His soup can series represents the technique of repetition. ’If you take a Campbell’s Soup can and repeat it fifty times, you are not interested in the retinal image. According to Marcel Duchamp, what interest you is the concept that wants to put fifty Campbell’s Soup can on a canvas. ’’(The Art Gallery, 2011). Through his insightful use of semiotics, signs and symbols his viewpoints of consumerism and his underlying meanings are shown effectively. The final artists that will be discussed in reference to their personal representations of semiotics is Ron Mueck. Ron Mueck was born in Australia in the year of 1958.

Mueck is a Hyperrealist sculptor who works in the United Kingdom. Hyperrealism is a genre of painting and sculpting that ‘describes a photorealistic rendering of people, landscapes and scenes. ’(Dictionary. com, 2012) In the early stages of his career he worked at making realistic props for the advertising industry. Through this work he increasingly wanted to perfect sculptures that looked immaculate from all angles, and he did. The main sculpture that will be referred to is called ‘’ Pregnant Woman’’ (See Appendix 3).

Mueck’s ‘Pregnant Woman’ is an oversized sculpture of a pregnant woman, using his talent of obsessive surface detail and intense physical features to stun his audience. Through his effective use of elements and principles, specifically shape and proportion Mueck has created a sculpture that is both attractive and estrange. His intended meaning was to produce an artwork that was exaggerated and to use a greater amount of detail, giving the impression that the views is looking through a magnifying glass.

Mueck used shape and proportion on his figures to show a close up inspection of the woman’s blemishes, hairs, veins and expression. Mueck explains, he made adjustments to maximise the physical and emotional aura of his figures’ (International Sculpture centre, 2009). The scale exaggerates the heavy wonder of the huge expanded belly, as well as the strength of the back and the pressure on the toes, swollen legs and hands. The effortless task of breathing is shown in outstanding pain by the shape of the mouth, in an open deep sighing action. Mueck used proportion and shape to express his personal meaning towards pregnancy. ‘Mueck’s work is spooky, uncanny, chronically intense, and even bizarre in its manipulation of scale.

He wants to see, in the details, an aesthetic and symbolic correspondence with the whole, with life and human destiny’ (National Gallery of Australia, 2012). Mueck effectively portrays his intended meaning, by reducing the beauty of life situations to make an exaggerated more thoughtful piece. Through his use of elements and principles he highlighted his personal symbols and intended meaning and depicted it successfully. Through the analysis of three very different artists Leonardo Da Vinci, Andy Warhol and Ron Mueck it is evident that semiotics are represented in artworks of all genres.

The artists conveyed private and public messages are shown in their portrayal of signs and symbols. These symbols are identified and interpreted by the audience so that a greater understanding is formed. The artists intended meanings are presented through certain art techniques, so that the audience’s interpretations are more profound. The use of their visual representation provides evidence that their artworks play and important role in today’s culturally derived world. Finally the overall intended meanings of these artists are portrayed successfully for the public to appreciate. 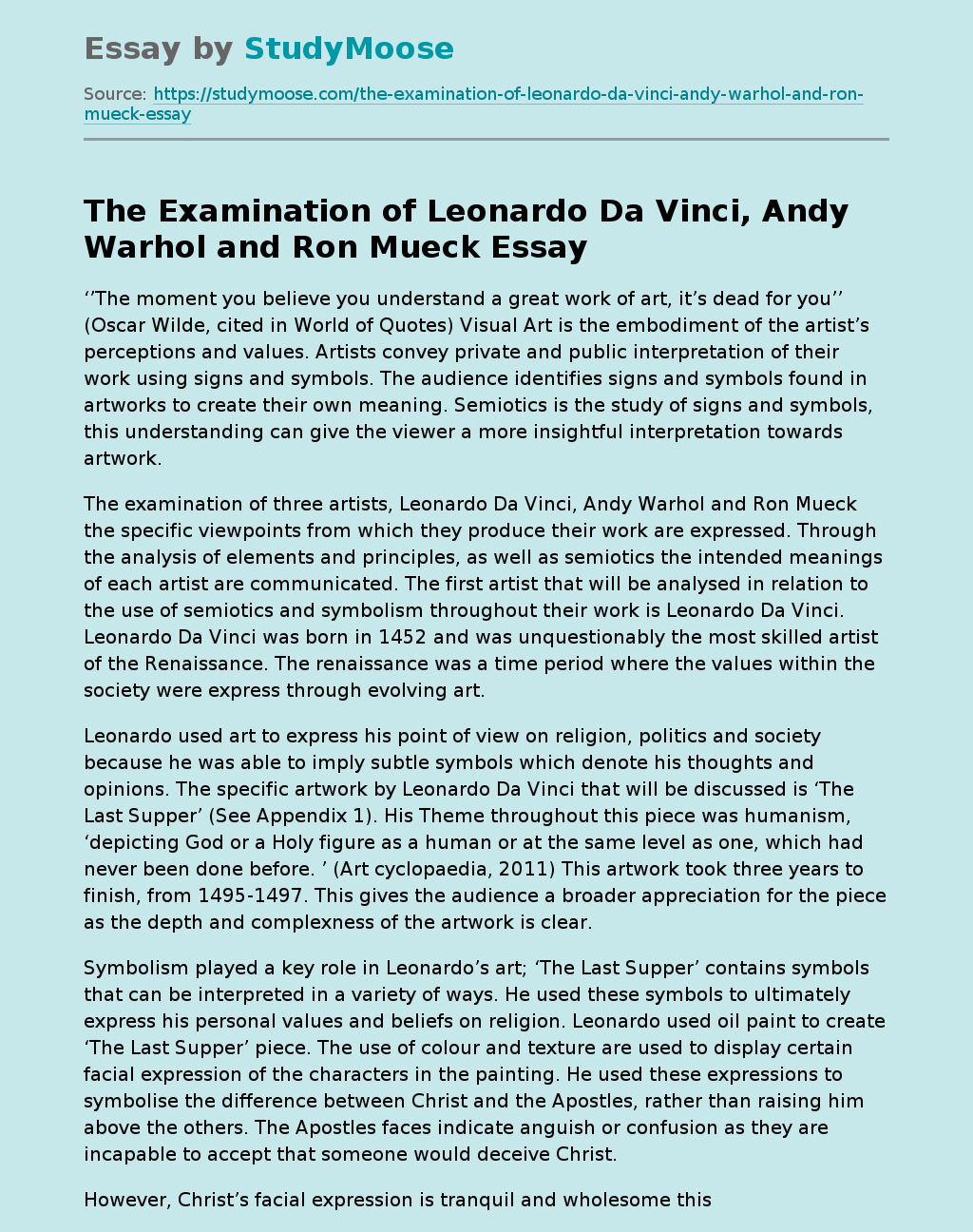