The Ethics of Hamlet

Morality plays a major role in the decisions we make in our daily lives. Often times, emotion alters our ability to make coherent choices. In the play “Hamlet”, by William Shakespeare, Hamlet encounters difficulty in making decisions as he deals with his nemesis, Claudius. In Act III Hamlet proves to be a cautious and contemplative person through his delay in avenging his father’s death.

In Hamlet’s first soliloquy, “To be or not to be”, Hamlet appears to be governed by reason as he debates whether or not it is one’s right to end his or her life.

Don't use plagiarized sources.
Get Your Custom Essay on The Ethics of Hamlet Just from $13,9/Page

Hamlet begins by weighing out the advantages and disadvantages of existence. In his words, “Whether ’tis nobler in the mind to suffer the slings and arrows of outrageous fortune or to take arms against a sea of troubles, and by opposing end them?”(III.i.57-60). Hamlet is struggling. Living in Misery is a major issue for Hamlet as he copes with the death of his father.

From this passage, we are led to believe that Hamlet favors suicide over life. Suicide is an act believed to be punishable by damnation.

Similarly, the mystery of life after death presents Hamlet with a fear of the unknown. For these reasons, Hamlet is hesitant and forced to re-analyze the situation. Clearly, Hamlet is engaging in a philosophical dilemma where he uses intellect and logic to seek for an alternative solution to his misery. Hamlet’s ethical nature is revealed by his thoughts. All in all, Hamlet is struggling with the knowledge of good and evil.

Likewise, in Hamlet’s second soliloquy, Hamlet’s inability to kill Claudius demonstrates that Hamlet is not only a contemplative person, but also a cautious individual that excessively analyzes situations. At this point, Hamlet has concluded to carry out an act of vengeance. He has convinced himself that he is justified to kill Claudius, the murderer of his father, but certain obstacles stand in his way. In one scene, Hamlet finds Claudius alone, praying, but decides not to kill him just then because of fear that he will send him to heaven. Hamlet says, “Now might I do it pat, now he is praying; And now I’ll do’t. And he goes to heaven…That would be scann’d…NO! Up sword; and know thou a more horrid hent” (III.iii.77-91). Hamlet decides to wait until he can catch Claudius engaging in a malicious act in order to secure that there is no chance that he goes to heaven.

Hamlet is clearly concerned that his foe will not suffer appropriately. Therefore, he delays his act of vengeance. Through his thoughts, he exposes a very important part of his personality, a habit of thinking things over and over again. This passage evidently shows Hamlet’s extensive use of vigilance and reasoning. This scene is exceptionally important because it is the only scene where Hamlet is alone with Claudius, giving him a perfect chance to retaliate. In every other scene, Claudius is in the presence of another person, typically a guard or an advisor. As a result, Hamlet is obligated to take on more precautions.

Altogether, Hamlet is both pensive and wary in determining his actions. His conscience interferes with his desires, but not his focus. His ability to rationalize serves as a model to humankind. How many of us ignore our intuition?

The Ethics of Hamlet. (2016, Jul 08). Retrieved from https://studymoose.com/the-ethics-of-hamlet-essay 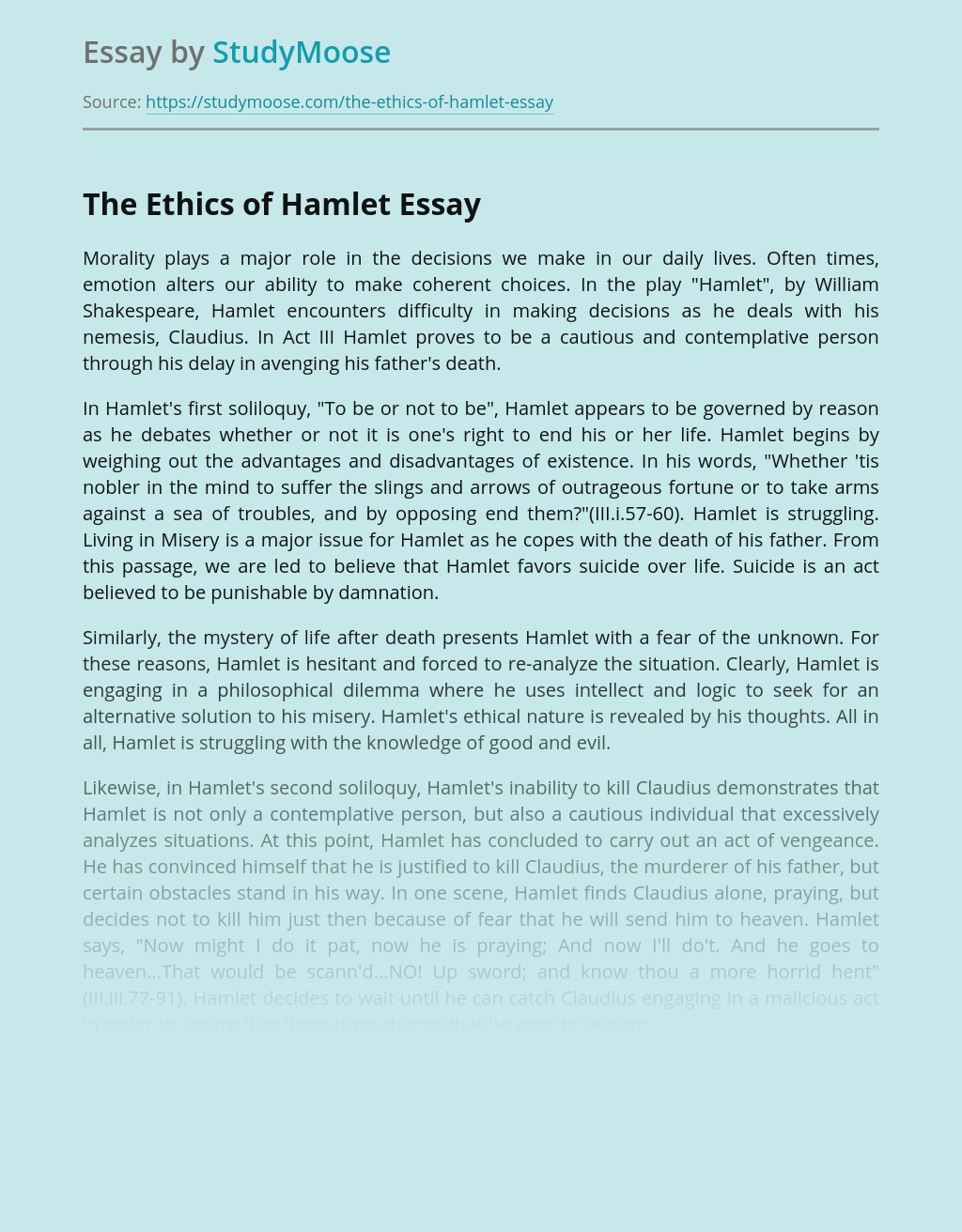 Rate this post It is without doubt that William Shakespeare has created many unique, thought – provoking characters. Hamlet is by far Shakespeare’s most compelling character. In Shakespeare’s play Hamlet, various character traits, exhibited by Hamlet, can be seen through his foils. Similarities with Hamlet and Horatio’s education, as well as their levels, can be...

Compare and contrast the approaches of Hamlet and Laertes to revenge

Rate this post “… By the image of my cause, I see / The portraiture of his. ” Compare and contrast the approaches of Hamlet and Laertes to revenge. Hamlet is the son of the late king Hamlet and is grieving over his father’s unexpected death. Both Laertes and Hamlet are avengers, avenging their fathers’...

Get Essay
An In-depth Analysis of Shakespeare’s “Hamlet”

Rate this post Aside from the Romeo and Juliet, Hamlet is probably also one of the most famous tragedies that William Shakespeare has ever written. Just like any other tragedies that Shakespeare has written, the story ended with the killing of many people including the main character, Hamlet. It also shows Shakespeare’s writing style with...

How far is Hamlet dominated by a Christian worldview?

Rate this post England during the 17th century was a Christian society and country. All Children would most certainly have been baptised shortly after birth and once at a suitable age capable of understanding religion would be taught the essentials of Christian faith. Attendance at church was compulsory; failure to do so without a good...

Rate this post Dylan Thomas once wrote “And death shall have no dominion”. William Shakespeare’s tragedy, Hamlet, is a provocative play that portrays how a young prince struggles with his philosophy of life and death after the death of his father. Hamlet, the prince, has trouble overcoming his father’s passing as he also has to...