The Ethical Issues of Legalizing Marijuana

Don't use plagiarized sources. Get your custom essay on
“ The Ethical Issues of Legalizing Marijuana ”
Get custom paper
NEW! smart matching with writer

I will also explore the moral and ethical views for legalizing marijuana.

Utilitarianism is the moral doctrine that we should always act to produce the greatest possible balance of good over bad for everyone affected by our actions (Shaw & Barry, 62). Many supporters of marijuana would argue that by legalizing marijuana it would reduce the crime rate, which at the end of the day would be better for everyone. Crime and violence are greatly increased due to the illegal selling and buying of marijuana.

If we legalized marijuana, it would end the need for such criminal behavior, like marijuana smuggling, distribution, sales, possession and usage.

Annually there is approximately 12 billion dollars spent on police officers, DEA, etc. , tracking down and punishing marijuana users (Prislac, 2009). This money could be spent on more useful programs, such as Social Security or even more important criminals; terrorists. The opposing side would argue that if we legalized marijuana it would actually increase our crime rate because there would be no regulation. There would be more people out there committing crimes because their judgment is impaired and they could not make rational decisions.

One of the biggest arguments against legalizing marijuana is that it impairs one’s judgment, which is often then compared to that of alcohol. The easiest way to compare these two drugs is to look at the amount of fatalities linked to driving under the influence of alcohol to that of marijuana. According to the National Highway Traffic Safety Administration in 2009 out of the 33,808 people that died in traffic crashes, an estimated 10,839 people died in alcohol-impaired driving crashes (Fars, 2010).

A Time Magazine article reported that a new study found 44,000 U. S. drivers involved in a fatal single-vehicle car crash between 1998 and 2009. Of those 44,000 drivers, 25% tested positive for drug use; the most common drugs being marijuana, cocaine and amphetamines (Melnick, 2011). This means on average (between 1998 and 2009) there were approximately 1,000 U. S. drivers that tested positive for drug use who were involved in single-vehicle car crashes. Ethical relativism says that right and wrong are only a function of what a particular society takes to be right and wrong (Shaw & Barry, 11).

Just based off of the information reported in this paragraph, I would say that alcohol should be a banned substance before marijuana To explore the economic benefits of marijuana legalization we must first look at the amount of marijuana that is purchased by users. The White House Office of National Drug Policy reported that between 1988 and 1995, Americans spent about 7 billion dollars on the illegal substance, averaging about a billion dollars a year (Prislac, 2009). This means that annually there is a billion dollars out there that is subject to no sales tax.

The national average for sales tax is 5%, so if you calculate the billion dollars being spent on marijuana, this means there is approximately 50 million dollars in sales tax that our government never gets their hands on (Prislac, 2009). By legalizing marijuana it would also stimulate the job market in our economy. There would be more jobs created for production, distribution, and the sale of marijuana. The opposing view of this argument is that it would also eliminate many jobs for police officers, DEA members, and many other government officials. Legalization of marijuana argumentative essay examples.

It would be argued that there would be no increase in the job market, if we are still taking so many jobs away by legalizing marijuana. For all of the social, economic, and ethical reasoning I believe marijuana should be legalized. Socially, legalizing marijuana would reduce the crime rate. Economically, it would improve government revenue and stimulate the economy. Ethically, in a utilitarianism society, we should always try and produce the most good for our society. There are always going to be two sides of this argument, but I think the positive effects it would have in our society would greatly outweigh the negative effects.

The Ethical Issues of Legalizing Marijuana. (2016, Oct 03). Retrieved from https://studymoose.com/the-ethical-issues-of-legalizing-marijuana-essay 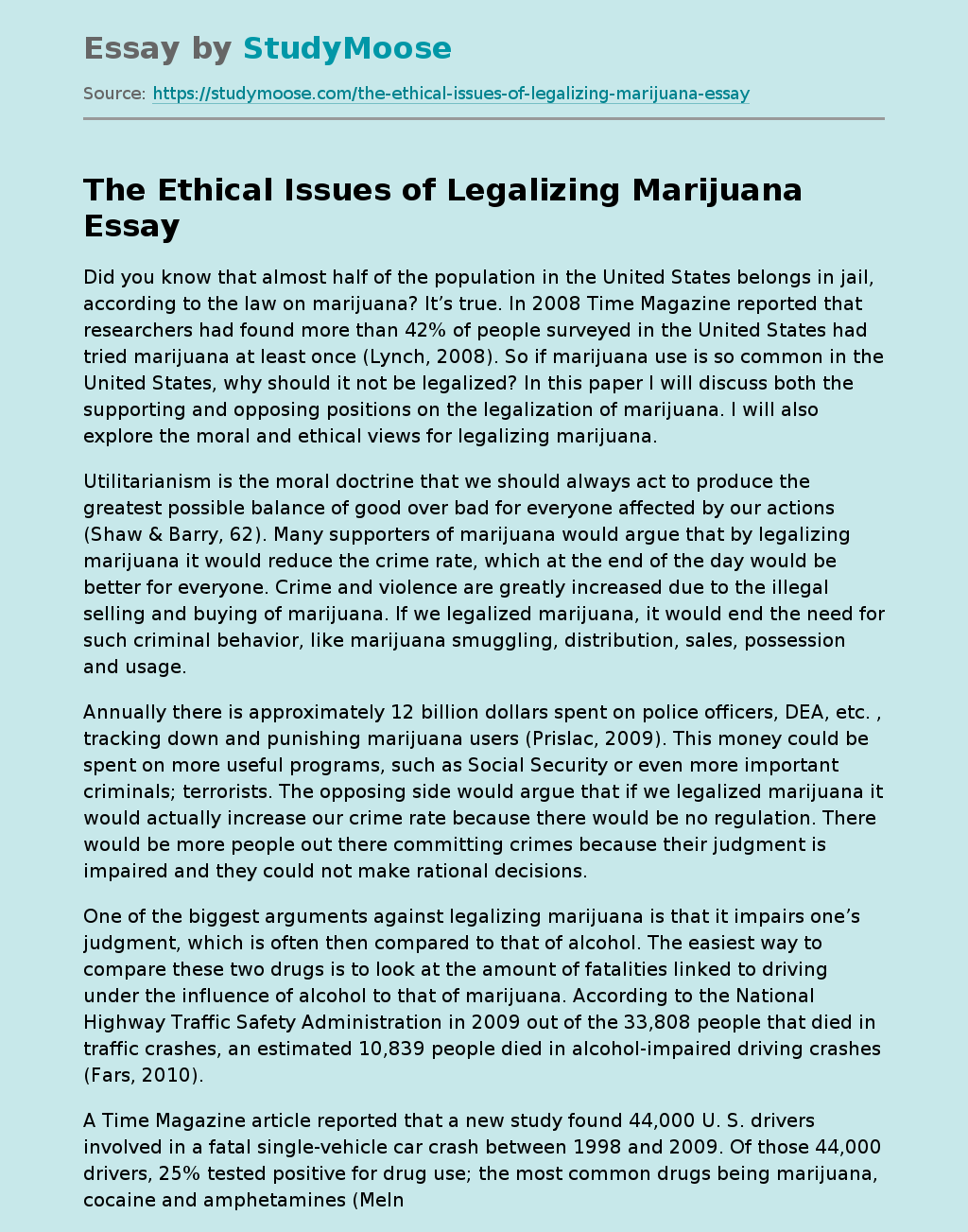