The environment and an assessment of their suitability

The model that is most commonly used to analyze the macro environment of the business is called PESTLE analysis. Using this analysis the political, economic, social, technological, legal and environmental factors affecting the business are analyzed.

Don’t waste time
Get a verified writer to help you with The environment and an assessment of their suitability
Hire verified writer
$35.80 for a 2-page paper

The political factors consist of the law and order condition and the political stability in the country where the business operates. The economic influences include factors such as the monetary and fiscal policy of the country. Similarly, it also include the per capita income of the people and the overall economic condition of the country where the business operates. The social factors also vary from one country to other and might impact the business it include the social customs and habits of the people which might impact their buying decision.

The micro environment of the company can be easily understood with the help of the Porter’s five forces analysis. This model can be used in order to properly understand the competitive position of the company with respect to its market and industry.

Unilever has to face the regional, local and global laws, rules and regulations. Some diverse areas such as product claims, product safety, copyright, trademarks, patens, the environment, corporate governance, employment and taxes are covered by these rules and regulations. Unilever may face legal action in the country where it operates if does not comply the laws and regulations of that country. Furthermore, the reputation of Unilever will also be affected if it breaches any laws. The change in taxes or the government will also affect the business of Unilever.

Over the years, Unilever has established a strong corporate reputation by focusing on the environmental and corporate issues which included promoting sustainable development and effectively utilizing the renewable resources of energy. It also very much concerned about the safety and health of its employees due to which the accident rates reduced significantly. Unilever is engaged with a large number of social welfare projects like safe drinking water and world food program. Furthermore, it also uses such materials and packaging stuff which is environmentally friendly. Moreover, the image of Unilever is established as a socially responsible and environmental friendly company.

The importance of technology for any business cannot be underscored. Similarly, Unilever has also spent a lot of money on improving the quality of products and its brand image. It is particularly interested in the development of its e-business. Furthermore, high level of automation is very critical for Unilever as it will differentiate it from the rest of its competitors.

The bargaining power of the buyers is low for Unilever as it has trillions of buyers around the world. They cannot influence Unilever to change the prices of its products; however, the customers might have choice on the additional offer.

Bargaining Power of the Suppliers

The rivalry among the existing competitors is very high for Unilever. Unilever has to face a number of competitors which are very strong in reality. The companies like P&G and Nestle pose serious threat to Unilever in most of the developed and underdeveloped countries.

Unilever is under constant threat of alternative products which are offered by the local producers as well as its rivals. The competitors of Unilever are spending large sum of money on new product development and R&D. Thus, the threat of the substitute products is high for Unilever.

One of the important benefits of globalization for the business is that it can effectively and efficiently communicate with its partners. Similarly, efficient communication can also be done with the suppliers and customers due to globalization. Furthermore, due to globalization the business manages their supplies, inventories and distribution network in an effective way. In addition, the local businesses can sell their products in the international markets with relative ease due to globalization. Due to globalization, Unilever can sell its brands with same ease in London and Tokyo. The business can also reduce the cost of labor and other manufacturing processes by outsourcing some of their functions. There are even many businesses which have outsourced all of their functions and only maintain a head office. Unilever has also benefitted from this strategy and it has suppliers in the countries where it operates due to which it costs are reduced significantly.

The environment and an assessment of their suitability. (2016, Apr 25). Retrieved from http://studymoose.com/the-environment-and-an-assessment-of-their-suitability-essay 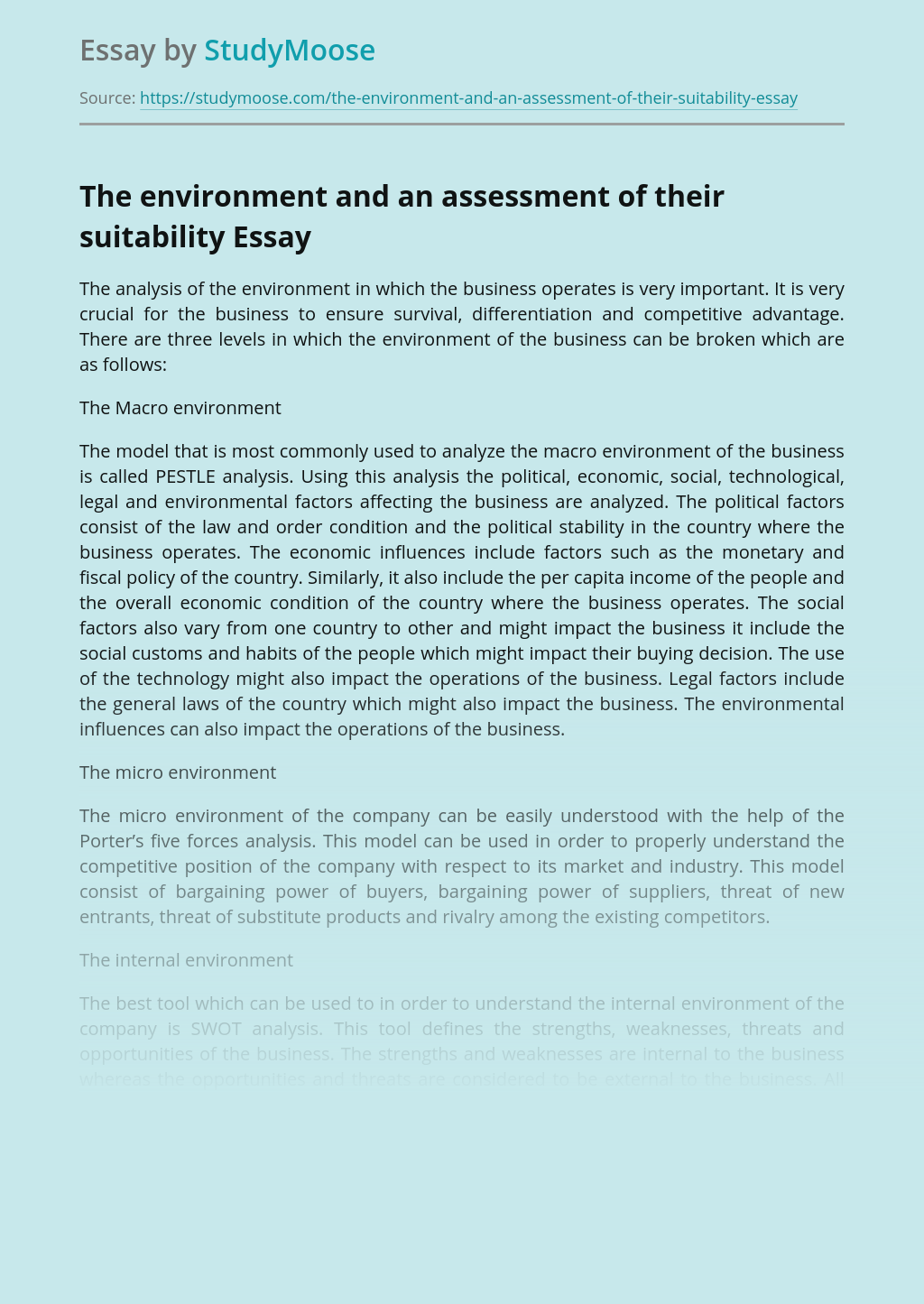 Don’t waste time
Get a verified writer to help you with The environment and an assessment of their suitability
Hire verified writer
$35.80 for a 2-page paper
Stay Safe, Stay Original