A person’s perception of anything is always influenced by their experiences. Alice Walker, the writer of “Beauty: When the Other Dancer is the Self”, is no different in regards to her perception of beauty. Walker uses various stylistic elements throughout her writing to convey her shifting outlook toward her own beauty. She also employs various rhetorical strategies in order to deliver a clear and luring story that keeps the reader engaged as she describes her life as a flashback.

Walker uses the accident that happens during her childhood to prove that one’s mindset can be altered because of a profound experience and how her attitude completely transforms from a conceited and arrogant child into a newly reborn woman who sees a new kind of beauty within her life.

Don't use plagiarized sources.
Get Your Custom Essay on The English Rhetorical Analysis Just from $13,9/Page

She uses different points of her life to develop this very idea in separate comprehensible stages. In Beauty: When the Other Dancer is the Self this I believe that the writer is trying to explain the drastic event that happened to Alice that would change her and her outlook on life.

In my opinion the writer did a great job in explaining everything too. I feel as though they did a great job because they did not go into too much detail to the point where it would make you want to stop listening. The writer explained just the right amount of details so that the reader could still understand everything the writer was talking about.

Walker’s piece argues that beauty is triumph over tragedy. Her personal essay takes the reader through a series of events in her life that have a particular focus: how she overcomes a conflict. The culmination of her argument occurs when she realizes there “was a world in my eye. And I saw that it was possible to love it: that in fact for all it had taught me of shame and anger and inner vision I did love it” (Walker). The progression of the events shows the reader how she develops this attitude toward beauty. Her argument is from a more personal standpoint, and so becomes more real to the reader.

The writer comes across as very knowledgeable and fair and her reputation does not seem to convey a just certain authority. Also Alice’s intention when she explains this story is to to teach the audience and delight the audience. These are her intentions because she teaches you to never let anything that you can overcome change the person that you are. She delight’s the audience because in the end Alice got the white glob taken out of her eye and then went on to do very well in school. In the end she also was a happy normal girl that was living a normal life, with a daughter and a husband.

The intended audience would have to be ranging from children in middle school all the way to adults. The audience holds a value that the author appeals to and that value would have to be the audience’s understanding of the material she is explaining. The main idea of this passage is to show how Alice over came becoming blind in her right eye. In this writing the author did not use any arguments. The author appeals to emotion in the story by saying some lines where people showed emotion.

For example when the incident happened and her brothers were scared they would get in trouble they said, “If you tell, we will get a whipping. You don’t want that to happen, do you?” (Walker). You could tell when they said this they were emotionally scared because they did not want to get int trouble by their parents.

In the beginning she starts off as a little girl saying,“I’m the prettiest!” always abusing her beauty to get her way with her father (Walker).Also when she was younger people always used to praise her beauty “Oh, isn’t she the cutest thing!” (Walker). “Then, one day, it ended,” she says (Walker). This is the beginning of the second part of her story. She is talking about when she was shot in her right eye and lost her sight and she wasn’t pretty anymore (Walker). It appears that the tone that Alice used in Beauty: When the Other Dancer is the Self is a nice, calm tone.

I say a nice, calm tone because nobody in the writing never got upset or angry. There wasn’t ever any arguing in the story and everyone seemed to get along. The only problem was when Alice talked about how she was picked on in school about her eye. Also the form in the story complements the content. The message that Alice was trying to deliver succeeds in fulfilling her intentions. Her intentions once again were to never let anything that you can overcome change the person that you are and be you no matter what happens to you. Alice also fits her messages to the circumstances to , times, for her audience.

Since Alice wrote these she has to have some very good values because it takes a positive person most of the time for them to conquer something like this that has happened to them. Lastly in the story Alice was showing a lot of positive energy and spirit before the incident happened, but after she lost sight in her right eye her life went downhill for a while. She started doing bad in school, she went to a new school because her family moved to a new county.

She didn’t like the school because it used to be a prison and she didn’t like the kids there either because constantly teased her about her eye. Her mother becomes ill and she has to move with her grandparents. When relatives would come visit she would always hide.

Life was pretty bad for a while until she was 14 years old. One day she was babysitting for her favorite older brother and he understood her feelings of shame and ugliness. Her brother and his wife took her to the local hospital where the white glob was removed her eye. Right after that she turned into a totally different person, she got the boyfriend of her dreams and she got more friends because she became more social.

Also she finished high school as a valedictorian, most popular, and the queen. Alice stayed positive after that and she felt great about her self. Many years later she was married, had a daughter, and was asked to appear on the cover of a magazine.

In conclusion Alice did a great job in explaining the drastic event that happened to Alice that would change her and her outlook on life. She didn’t let the incident change who she was and she went on to live a happy normal life with her husband and daughter. Alice wrote a great story and did a fabulous job in explaining everything. She stayed a wonderful and great mother that she was. 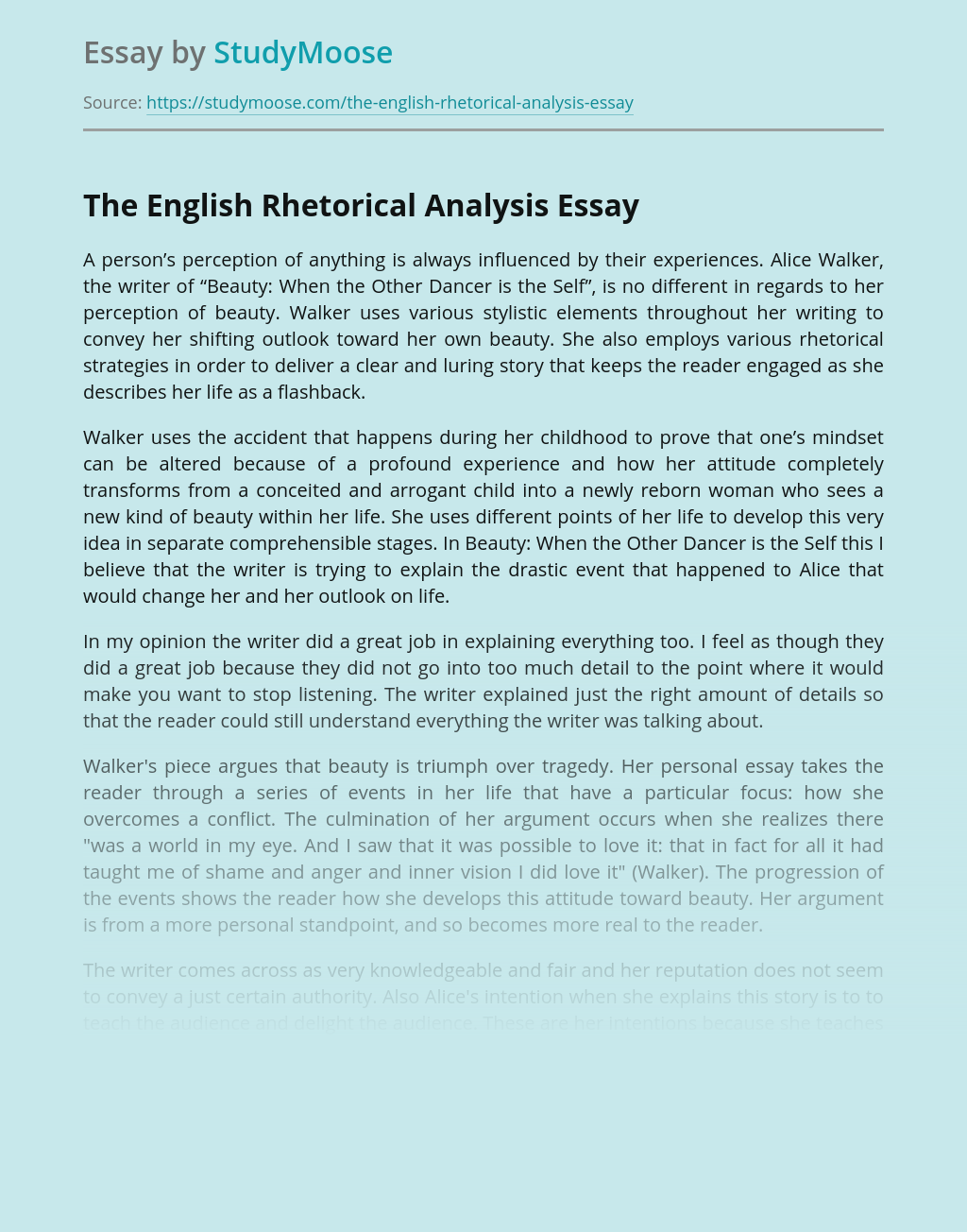 There are many techniques that are used to create tension and suspense in ‘The Monkey’s Paw’. From the very beginning we can see that the language used sets the scene and conveys the mood of the story; “the night was cold and wet”. Pathetic fallacy immediately implies that the story will be based on evil...

Get Essay
A Farewell to Arms

A Farewell to Fond Love and Abandonment of War Course: Composition 1302 July 14, 2013 Outline Thesis statement: Though war was the foremost thought in everyone’s mind love and passion between two confused, young people blossomed and flourished. The war was not a place to start a love affair, it took the lives of many...

Throughout time, men have waged war, some for power, some for splendor, some for honor and some for love. In ancient Greece, the enthusiasm of two of history’s most famous lovers Paris, Prince of Troy and Helen, Queen of Sparta, sparks a war that will devastate a civilization. When Paris takes Helen far from her...