Analysis of “The End of Race: Hawaii and the Mixing of Peoples”

What if the human races of the world all vanished into thin air? That’s what Steve Olson proposes in “The End of Race: Hawaii and the Mixing of Peoples”. According to the world everyone is made of a certain race. The two main races are White and Black (African American). But there are others as well, including American Indian (Alaska Native), Asian, Hispanic (Latino), Native Hawaiian (Other Pacific Islander), or Other.

Most people only identify as one corresponding to their birth parents, where they were born, or what they identify with the most from their own choice.

Don't use plagiarized sources. Get your custom essay on
“ Analysis of “The End of Race: Hawaii and the Mixing of Peoples” ”
Get custom paper
NEW! smart matching with writer

Some people, even from one of our own states, go to such heights as to say that they are “Mixed”. Steve Olson believes that, “Almost half the people who live in Hawaii today are of “mixed” ancestry. What it means to be mixed is not all obvious genetically, but for official purposes it means that a person’s ancestors fall into more than one of the [six] “racial” categories identified on the U.

Intermarriage is a cumulative process, so once an individual of mixed ancestry is born, all of that person’s descendants also will be mixed. As intermarriage continues in Hawaii – and already almost half of all marriages are between couples of different or mixed ethnicities – the number of people who will be able to call themselves pure Japanese, or pure Hawaiian, or pure white (haole in Hawaii), will steadily decline” (251). Races could truly end if everyone becomes mixed somehow.

Collaboration could also send races on their way to the dump. One man who has insight on collaborating is Bressler 2 Marshall Poe.

In Poe’s “The Hive” he claims that, Wikipedia has the potential to be the greatest effort in collaborative knowledge gathering the world has ever known, and it may well be the greatest effort in voluntary collaboration of any kind” (264). If that many people could come together and create a website made of their own thoughts and opinions, who says that we can’t all agree that races are over and done with? So with mixes of races and collaboration on what races are, it could really be the deadline for races. Biology, location, and affiliation could change whether race persists or not.

Analysis of “The End of Race: Hawaii and the Mixing of Peoples”. (2016, Dec 16). Retrieved from https://studymoose.com/the-end-of-race-2-essay 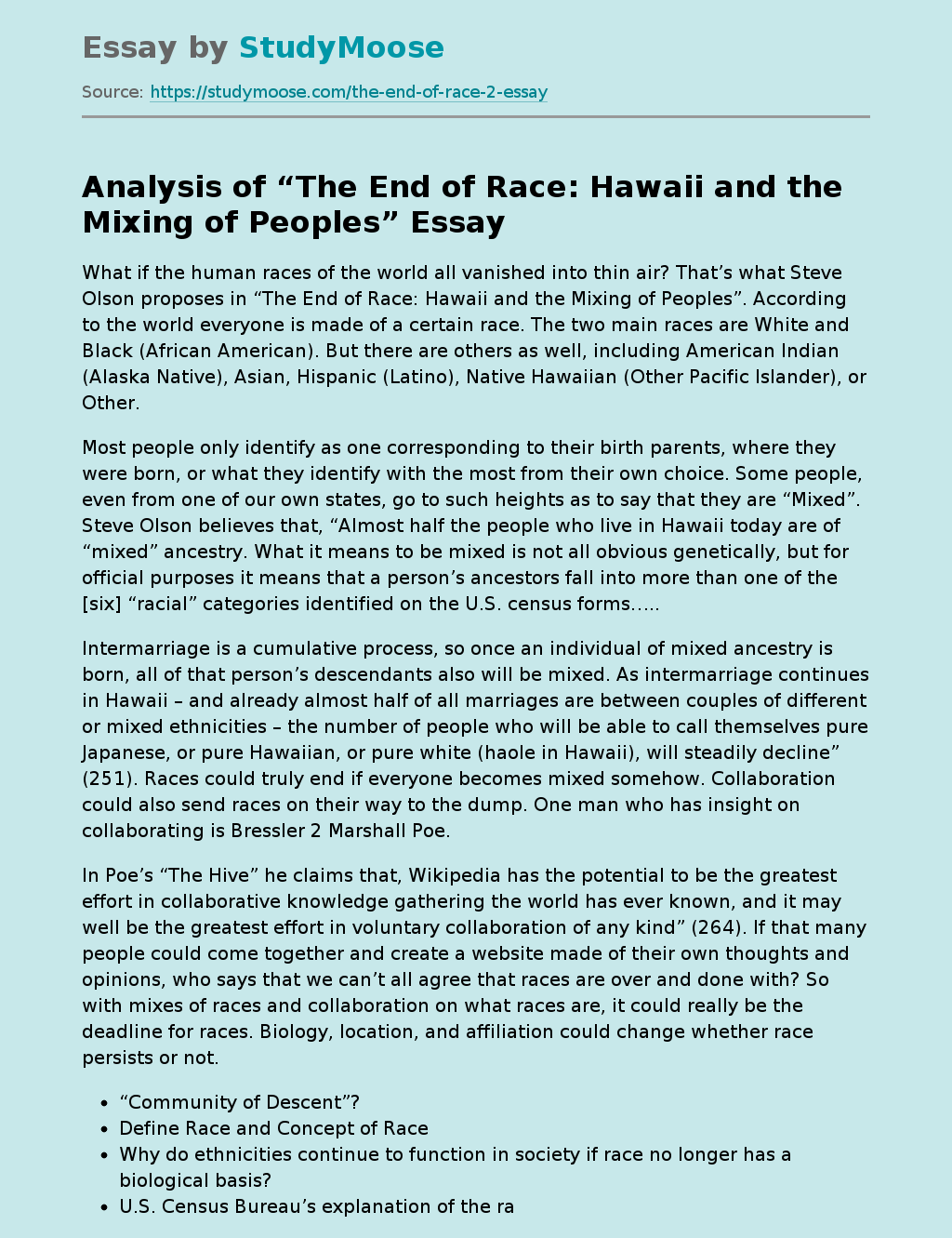