The Effects of the Media

The media is without a doubt a constant factor influencing us as members of the public; it is a way of communication. We communicate through the media. This essay will investigate the effects of the media and if it has any influences over us as voters. Or are there any other influencing factors which determine the outcome of UK parliamentary elections. It is fairly accurate to say that the media does determine the outcome of elections, but only to a certain extent.

Don't use plagiarized sources. Get your custom essay on
“ The Effects of the Media ”
Get custom paper
NEW! smart matching with writer

“It is suggested that the work of the media, and particularly the presentation and coverage of political contestants, can affect voter behaviour and choices” (Negrine, 1989: 179)

Mediums such as newspapers, television, radio, internet and broadcasting are important political factors in political representation. Politicians can’t act politically without being engaged with the media in some way as Riddell states “television has been the driving force of the changing relationship between Media and Parliament. The steady growth of current affairs programmes on television and radio since the late 1950’s has provided a more direct way for leading politicians to communicate with the public” (cited in Seaton, ed, 1998:10).

He also goes on to say that “When a major policy initiative is to be launched, it will invariably have been leaked/previewed in that morning’s newspaper” (Seaton, ed, 1998:9). It is the media especially through newspapers informing the public about which candidates are standing for election, their policies and party manifestos. King states that In 2001 “New Labour had the editorial support of an even larger majority of the national daily and Sunday newspapers at the 2001 general election than in 1997” (King, 2002:chpt 5).

Up until 2001, Labour never had the majority support of the national press at any general election.

By 2001 six dailies and five Sunday gave the party largely unqualified endorsement. (King, 2002: chpt 5). This change of editorial attitude was very much a cause of the Labour landslide victory at the 2001 General Election. Another effective form of the media politicians use is party political broadcasting. Party political broadcasts that allow qualifying political parties free access to airtime in order that they can convey to the general public party manifestos and party policies has been very much a part of the television tradition in the UK.

(Lange et al. 2004: 151). As there is a ban on paid political advertising these broadcasts offer political parties their only opportunity to present an unmediated message directly to the electorate. Surveys carried out by The Electoral Commission January 2003 show that, at election time these are the most effective direct campaigning. Peter Riddell comments that “Mr Blair is far more likely to give a radio or television interview.. , than he is likely to speak in the Commons”. (Seaton, 1998:11).

This may be down to the fact that more of us are tuning into the news on a regular basis or reading the pages of the Mirror, than watching a live broadcast from the House of Commons which may to some seem extremely boring. It is during the hours the news is televised that these party political broadcasts are shown; during which politicians have the chance to get their message across without being faced with criticism from their opposition. Although the media is a powerful force generating public opinion through newspapers, TV, radio and the internet.

I do not believe the media alone can determine the outcome of elections; there are other contributing factors which influence voting behaviour such as effective leadership, class, religion and party policies. In the 2001 election, nine national newspapers, representing 50% of total circulation, were either equivocal about their choice or did not make one at all. (Lange et al. 2004:154). This may be that perhaps newspapers have abandoned their old sponsorship and support for all parties and are keeping their distance.

The Effects of the Media. (2020, Jun 02). Retrieved from https://studymoose.com/the-effects-of-the-media-essay 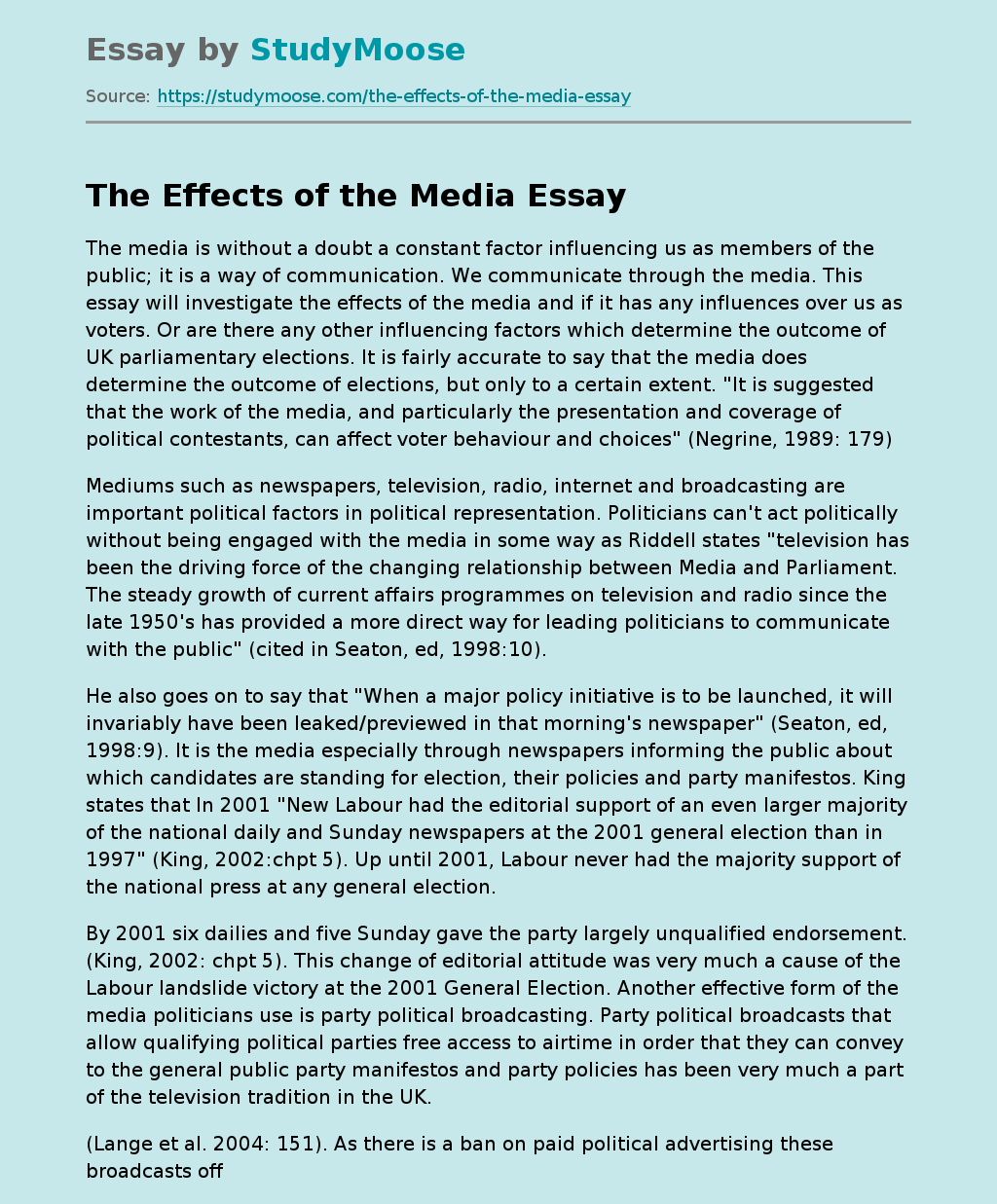