The Effects of Social Networking on Teenage Lives

The life of an average teenager is filled with excitement, curiosity, love, and the constant addiction into the world of social networking. Teenagers seem to have this double life when interacting with different social networking sites. From Facebook to Twitter to online games and game systems, teens are overloaded with several options to stay connected with their friends. Average teenagers are constantly updating their status, playing against other users on online games, tweeting their favorite quote, or using up all their allowance money on a game system that they will use to challenge a friend.

Don't use plagiarized sources. Get your custom essay on
“ The Effects of Social Networking on Teenage Lives ”
Get custom paper
NEW! smart matching with writer

The use of social networking sites are growing intensely across the United States and the world.

Teenagers would not be wrong when they say “I have friends all over the world.” It just proves how fast a teen can make connections with a click of a button. According to Pew Research Center, “73 percent of teenagers in the United States are members of some type social networking community” (Lenhart, et al.

, 2010). Teenagers between the ages of 12-17, are where social networking hits the hardest. In this digital world teens are bombarded with vast amount of technology that will one day reach a point where it will be too much to handle. The negative effects of social networking on an average teenage life appear through their education, health, and private life. All this online friend-forming has an effect on teenage learning.

When teens spend most of their time on the computer chatting, on the phone texting, or versing a friend on a virtual game, they do not realize how much time is being wasted daily.

According to National Board Association, teens spend an average of nine hours per week on social networking sites. They begin to procrastinate more, turning in their assignments late, not focusing in class, and some of them end up failing tests or quizzes. For example, (ex) Social networking plays a major role in every teenager. Without it they would feel left out and not know what is going on in the virtual world. (ex) Teenage health is commonly affected by social networking sites. Teens will go to any site for help when they have issues related to their body. In various ways, “the mass media transmit messages to adolescents regarding the desirability and undesirability of physical attributes” (Ricciardelli et al., 2000). In early teenage years, girls who read through magazines and advertisements are searching for important methods of reaching the ideal body weight, they “internalize themessages presented, and use the media as a source of information about how to improve their physical appearance” (Littleton and Ollendick, 2003).

These girls are more likely to experience body dissatisfaction because of the obvious inconsistency between their actual body size and the ideal shown in the media. According to a survey of adolescent girls, “69% reported that images of females displayed in magazines inﬂuence their perceptions of the ideal body ﬁgure, and 47% reported that the images evoked in them a desire to diet and lose weight” (Field et al., 2001). Shifting gears towards another view of how social networking effects teenage health would be their psychological well-being. This often refers to various measures that capture an individual’s gratification with life. Studies have found that social networking can increase depression and anxiety. Researchers from Home Net study found that longer use of the Internet was related to increased depression, loneliness, and smaller social circles (Kraut). These results suggest that Internet use isolates individuals from their friends and family, and has a negative impact on their health. Researchers have also proposed a new phenomenon called “Facebook depression.” They define it as a depression that develops when preteens and teens spend a great deal of time on social media sites, such as Facebook, and then begin to exhibit classic symptoms of depression (Strum). Teens who suffer from Facebook depression are at risk for social isolation.

The Effects of Social Networking on Teenage Lives. (2016, Apr 12). Retrieved from https://studymoose.com/the-effects-of-social-networking-on-teenage-lives-essay 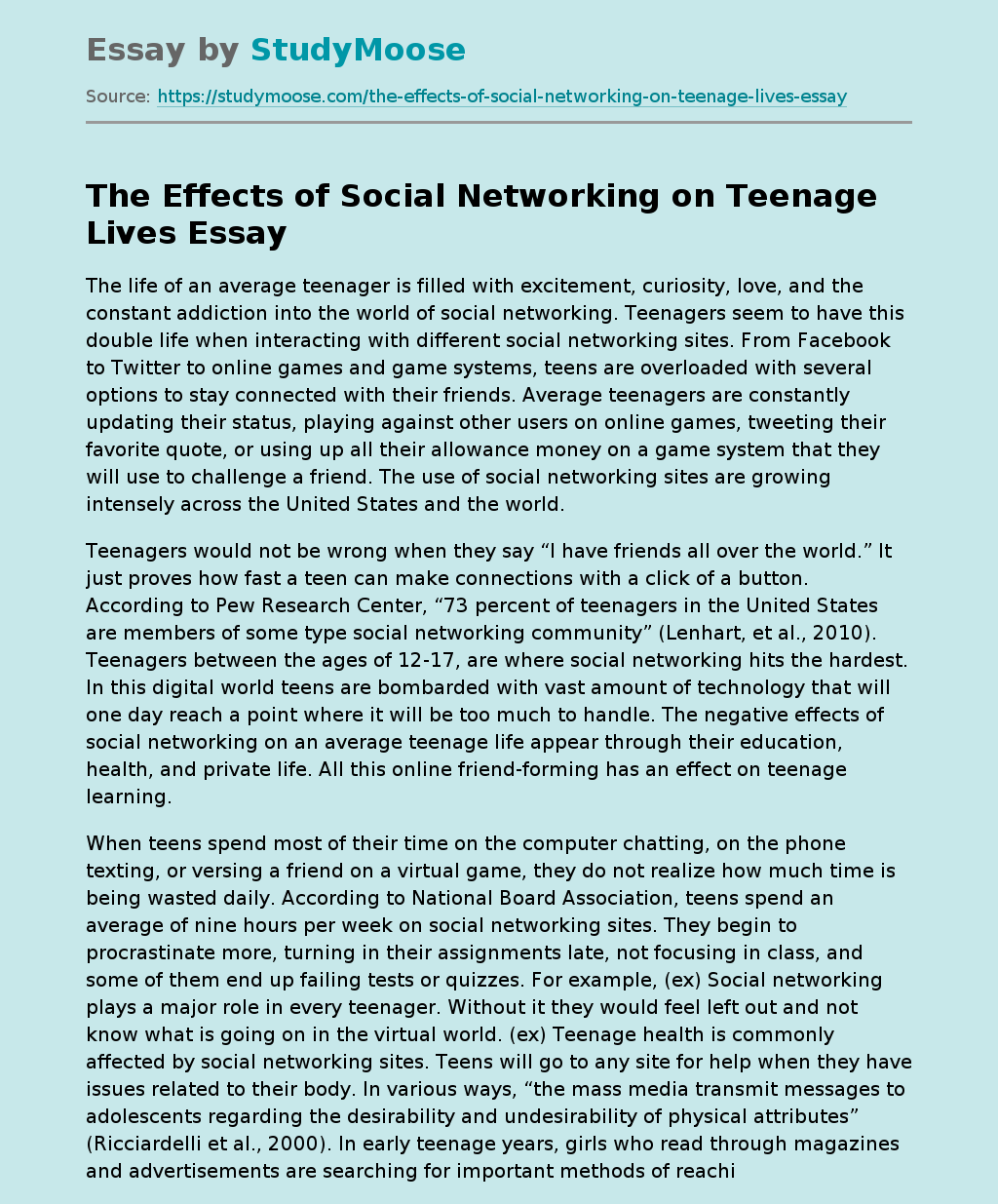