The Effects Of Gambling on a Worldwilde Scale

As the case explains, gambling has existed for many centuries all around the globe. With the evolution of the Internet, this form of recreation has become widely available for everyone with Internet access. This has created opportunities for gamblers, but has become a challenge for those trying to stop the spread of such recreation. To answer the first question, of whether Unlawful Internet Gaming Enforcement Act (UIGEA) unfairly discriminates against offshore gaming companies, what is (UIGEA) and what it does or is meant to do should be considered first.

Don't use plagiarized sources. Get your custom essay on
“ The Effects Of Gambling on a Worldwilde Scale ”
Get custom paper
NEW! smart matching with writer

In its current form, the UIGEA forces banks and financial institutions from processing gambling transactions to and from online gambling sites. This can include certain payment processors, which is why most US players have experienced difficulties in using their credit cards to deposit online, or with checks. The passing of this act has been controversial, as it is seen in different perspectives by the parties involved. Therefore, in order to assess the question, there are different aspects that need to be examined, this include, legal, political and regulatory enforcements in the gambling industry.

Proficient in: The Effects Of Gambling

It is important to understand that the government is involved in many ways from implementing regulations to collecting gambling taxes. Everyday people are affected, from families to people who believe it is their freedom to gamble. Hence, it can clearly be seen from the mere purpose of the UIGEA itself that the act unfairly discriminates against offshore gaming companies by preventing financial transactions to these as mentioned earlier. Moreover, this can be seen as an unfair move from the part of the US government, as other forms of gambling in the form of bets inside of the US are still practiced, such as bets on horse-racing.

Furthermore, it can be seen that the government’s attempt to stop the practice of online gambling is unfair as the government is merely concerned about losing revenues that would result if such practice is deliberately approved. The government simply wants to prevent the cash outflow resulting from citizens gambling online as this can be very high as gambling is associated with being an addiction. This may also contribute from the government’s desire on not losing the potential high inflows from tourism visiting the “Las Vegas” casinos. Ineffectiveness of Law as a Restrictive Measure.

Moreover, we continue by answering the second question. How likely is it that the legislative efforts to prevent people who want to gamble from gambling will be successful? The problem is that the United States Government is the biggest influence on regulation for any aspect of life in America. The government can control what citizens do and how they do things. This can be the result of an effort to protect US consumers from addiction and debt. Hence, the success of such efforts is questionable as such efforts are affecting the American citizens who believe it is their freedom to gamble.

Also, the countries that have gaming companies are greatly affected and are on denial of such efforts, as they feel the US is violating the WTO agreements for free trade. They feel that the US should comply with fair trade and stop the efforts of preventing citizens to engage in offshore gaming as this has no illegal implications that need to be questioned. Hence, the WTO needs to take a fair stand in this matter by allowing the US to regulate such gambling activity but not ban it, until they can prove that such activity is considered harmful to the American citizens and stop trying to simply protect their benefits.

Moreover, the success of such legislative efforts seems hard as there are a great percentage of citizens in disagreement of such law, as are the Poker Players Alliance (PFA) and The American Gaming Association. Both of these huge stakeholders firmly disagree to the legislative efforts. On the other hand, these efforts seem difficult as when implementing the prevention of financial transactions to these services, banks and other financial institutions are greatly affected.

This is so, as the term “Internet Gambling” uses such institutions to process payment for the services provided by offshore gaming companies. Now, the US government is somehow forcing these financial institutions to prevent such payments, not realizing the huge task impose on them. This is a hard task for banks as they are expected to help prevent unlawful internet gambling, when it is hard to even identify and stop cross border payments that are not subject to US law. They strongly believe that preventing the use of online payments is not an effective way to approach such activities.

Inefficient Use of Government Resources The above statements lead to the third and last question, which is whether or not the US is devoting substantial time and money to curtail offshore Internet gambling. From the question and answer earlier on whether the (UIGEA) is a fear act or not on offshore gaming companies, it was clearly stated that it is not, hence, this can lead to conclude that the US is indeed devoting substantial time and money on something that would lead to almost a negative result.

The US government is not acting as a fair trade partner with such implementations, as it has been the case with the government on other matters of similar importance, where it’s its interest that almost always prevails in discussions of such matter. Government officials are spending time and of course a great deal of cash in pushing for such type of acts to prevent Internet gambling from being continued.

They would also have to further spend more resources on following up on such implementations and even pay the consequences of being an unfair trade partner when it comes to this type of matters with trading partners under the WTO. From the realization that many parties involved on this matter are in disagreement with the decision of the government, and their voices/ rights are not being heard, it can be seen that the government is indeed acting on benefits that only they would receive, making it unfair for all others involved, as this is done not on the behalf of the American citizens, but more on a personal note.

In conclusion, it can be agreed that such implementations by the US government on avoiding Internet gambling are unfair for offshore companies, and the use of time and money on such implementations and regulations are seen as not using these on something that is worthy and of importance, as many parties, such as gamblers, financial institutions etc. involved, see it as unfair, and hence, this might lead to an unsuccessful practice from the US government.

The Effects Of Gambling on a Worldwilde Scale. (2017, Apr 25). Retrieved from https://studymoose.com/the-effects-of-gambling-on-a-worldwilde-scale-essay 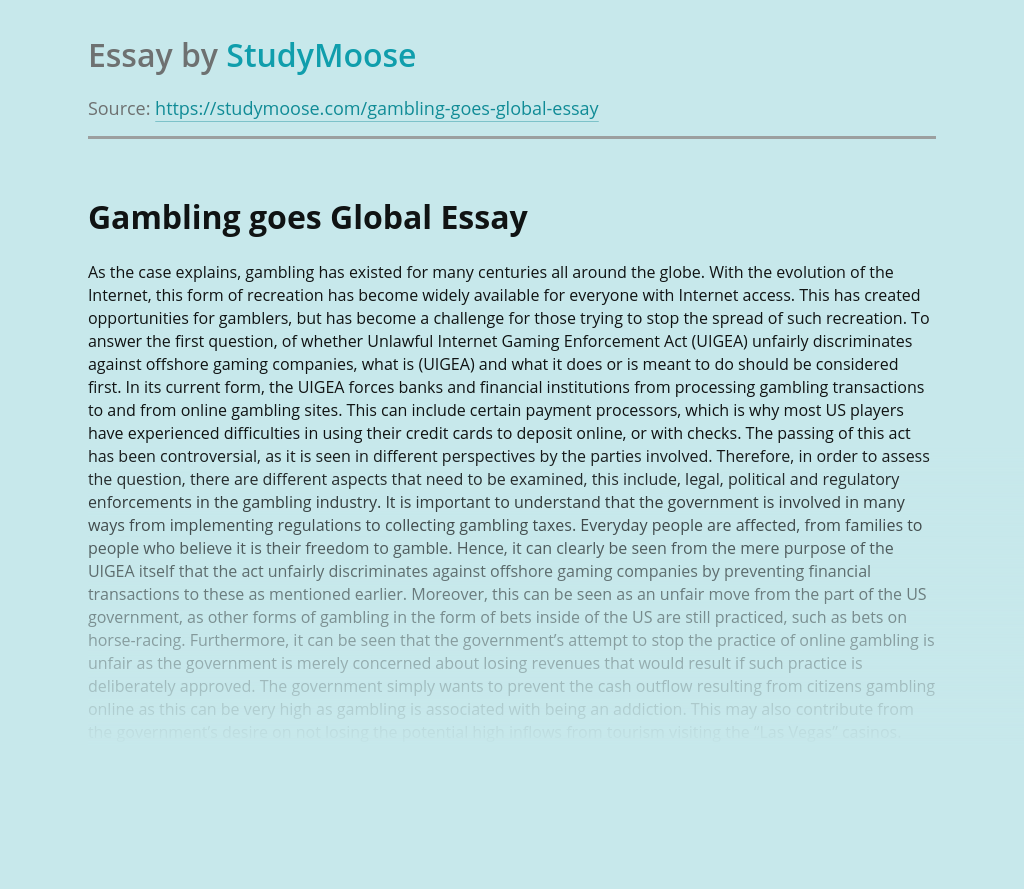