The Effects of Exercise on the Pulmonary Ventilation Rate

Respiration is the process that takes place in every living cell to make energy available to the body. Energy is vital for us to carry out many life processes such as movement and so respiration in essential to life. During respiration glucose and oxygen are used in a reaction that produces energy and gives out carbon dioxide and water as waste products. Glucose is obtained by digestion of food and oxygen is taken from the air during a process called breathing or ventilation.

Don't use plagiarized sources. Get your custom essay on
“ The Effects of Exercise on the Pulmonary Ventilation Rate ”
Get custom paper
NEW! smart matching with writer

Pulmonary Ventilation is the term given to the movement of air in and out of the lungs; the rate of pulmonary ventilation is defined as the tidal volume multiplied by the number of breaths taken per minute. Tidal volume is the volume of air breathed in or out during one cycle of quiet breathing. There are a few different factors that can affect the pulmonary ventilation rate but the most common and often most noticeable variation in pulmonary variation rate occurs during exercise.

During normal quiet respiration, the average person breathes 15 times per minute. Breathing is controlled by movements in the thorax brought about by the contracting and relaxing of the diaphragm and the intercostals muscles. Upon inspiration the diaphragm and the external intercostals muscles contract and the internal intercostals muscles relax, moving the ribs upwards and outwards. As the volume of the thorax increases, the elastic tissue of the lungs allows them to expand and air rushes into the lungs due to pressure inside the lungs being less than the atmospheric pressure outside.

Normal breathing is a reflex action that occurs automatically without the person being consciously aware that it is taking place. The movement of the diaphragm and the intercostals muscles are dependant on the stimulus of impulses from the motor nerves delivered from the brain. The part of the brain that controls normal breathing is called the medulla and is situated in the hindbrain. Within the medulla is the medullary respiratory system containing a mass of neurones that can be split up into the inspiratory centre and the expiratory centre. The activities of these centres are controlled by chemoreceptors in the arterial blood and pressure receptors in the lungs. During respiration carbon dioxide levels increase as energy is produced and used up by the body (as it is of no use to the human body it needs to be excreted), as carbon dioxide is an acidic gas this also causes the pH of the blood to decrease. Chemoreceptors detect a change in levels of carbon dioxide, a significant decrease in oxygen and a change in pH.

During inspiration an increased level of carbon dioxide and a low pH will stimulate chemoreceptors in the blood, which in turn will stimulate the inspiratory centre. The inspiratory system sends an impulse to the muscles of inspiration – the diaphragm and the external intercostals muscles – and the stimulation of these muscles causes us to breathe in. As the lungs expand due to inspiration this change is detected by pressure receptors of stretch receptors which then stimulate the expiratory centre, which then stimulates the muscles of expiration – the diaphragm and the internal intercostals muscles – and causes us to breathe out.

Due to the process of ventilation as explained above, any change in carbon dioxide, pH or a dramatic change in oxygen will automatically cause inspiration and as soon as inspiration has occurred, stretch receptors will induce expiration. During exercise, the body uses an increased amount of energy due to the requirements of cells that are working harder than they would during normal activity. This means that to produce this energy, respiration is occurring at an increased rate. Therefore oxygen is being used up and carbon dioxide is being produced at a faster rate. During intense exercise lasting long periods of time, the body may become deprived of oxygen as it is being used up faster than it can be delivered to the cells; this may mean that the cells will begin to expire anaerobically. Anaerobic respiration uses only glucose to produce energy with the only waste product being lactic acid. This acid along with the increased levels of carbon dioxide will cause the pH level of the blood to decrease dramatically.

When exercise takes place the pulmonary ventilation rate increases significantly. This is due to rapid inspiration caused by the detection of low pH and oxygen levels and increased carbon dioxide levels in the blood which then in turn causes expiration due to the stimulation of the stretch receptors in the lungs. This ventilation process will happen much quicker than normal as more breaths are taken per minute to attempt to restore the constant balance of gases and pH. Tidal volume will also increase during exercise as the inspiratory and expiratory reserve volumes are used so that more air and therefore more oxygen can be inspired in one breath and more carbon dioxide can be expired. This overall results in a major increase in pulmonary ventilation rate.

The Effects of Exercise on the Pulmonary Ventilation Rate. (2016, Jul 02). Retrieved from https://studymoose.com/the-effects-of-exercise-on-the-pulmonary-ventilation-rate-essay 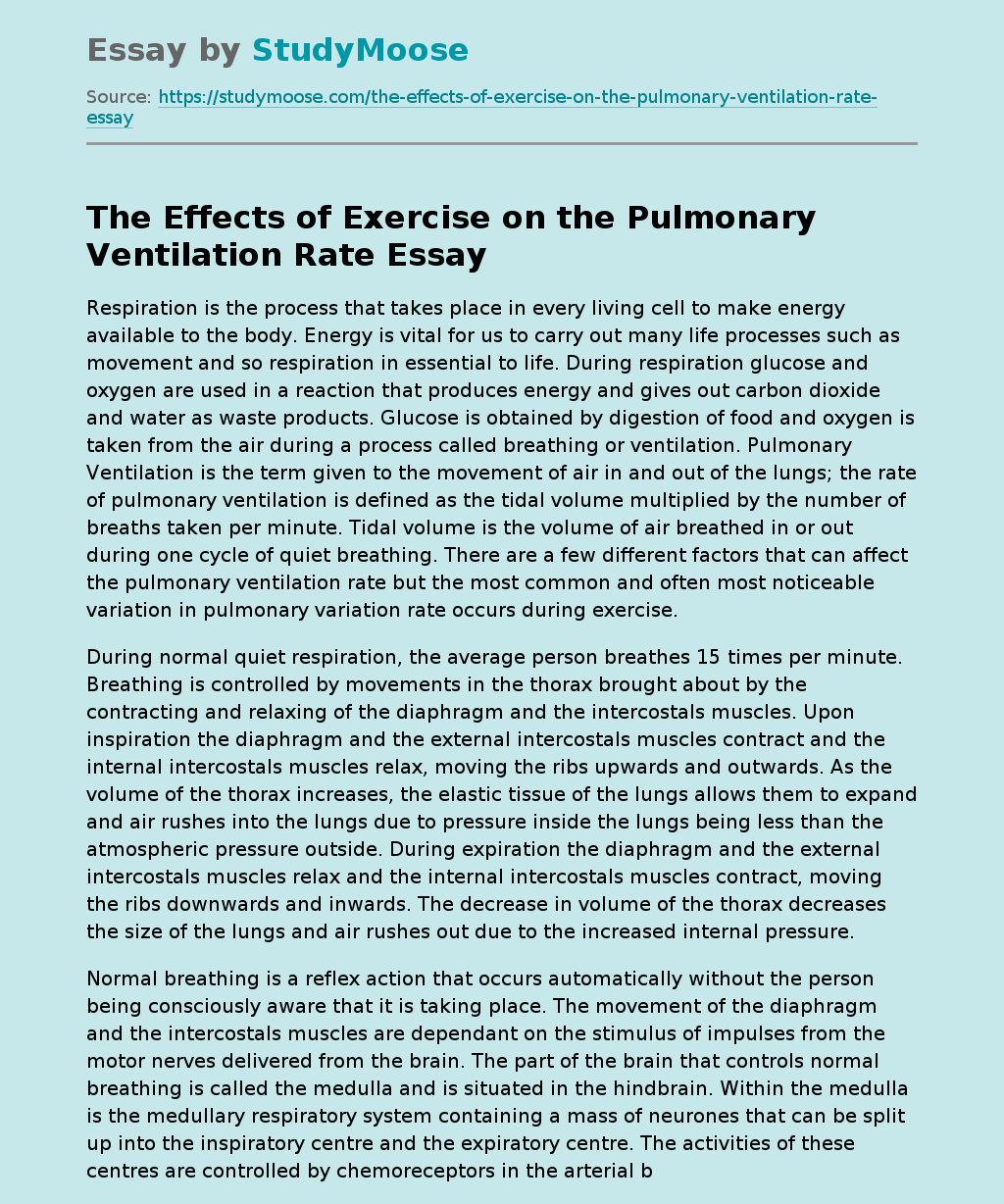