The Effectiveness of Juvenile Curfews for Society

Curfew is a word that derived from the French word “courvrefeu”. The meaning of the word courvrefeu is “to cover fire”. Implicating that a curfew is a way to put something out or maybe to reduce something down. Going back in time, curfews have been around since the feudal era. A long ways ago, “a bell would ring to alert the villagers to put out their fires and go to bed for the night. William the Conqueror even used an 8:00 p.

Don't use plagiarized sources. Get your custom essay on
“ The Effectiveness of Juvenile Curfews for Society ”
Get custom paper
NEW! smart matching with writer

This led to the support and enactment of curfews for minors in almost 3000 cities in the United States by 1900.

”(The Effectiveness and Enforcement of Curfew Laws and Minors’ Rights) The overall purpose of juvenile curfew laws is to reduce juvenile crime and keep teenagers off the street at night who might be up to no good. Some cities claim that the crime rate indeed has gone down a certain percentage since they have enacted the curfew laws, but others claim otherwise. Supporters of the curfew laws believe juvenile curfews are effective in reducing crime and help in their homes.

Evidence was collected “when a dusk-to-dawn curfew was imposed in New Orleans on youngsters under 17, the city reports a 20 percent decrease in juvenile crime. Dallas declares that violent juvenile crime has been reduced 30 percent and that overall juvenile crime has dropped nearly 21 percent since a curfew was instituted in 1994.”(Curfews and Common Sense) An example of crimes or uprisings that adults are worried about would be the shooting in Hartford, Connecticut. At night, blatantly out in the street, there was “a chain of shootings that left one 21-year-old dead, a 15-month-old shot in the left leg and six young people wounded, the city in August imposed a 30-day emergency curfew on everyone under the age of 18.”( McKinney, James) Or the “flash mobs” in Philadelphia where “40 youths got violent in Central City, beating and hospitalizing 59 people. Days later, Philadelphia Mayor Michael Nutter announced emergency changes to the city’s youth curfew, setting earlier time restrictions and specifically targeting neighborhoods where the groups of youth had gathered.”(The Trouble With Youth Curfews) And also the case of Ramos v.

Town of Vernon. A male was convicted of murdering a 16 year old boy in his home. The whole town pushed for a curfew law imposed on the town because they wanted to keep things like this from occurring again. But “in actuality, the murder had nothing to do with nighttime juvenile crime and victimization, or even gang violence”( Proliferating Curfew Laws Keep Kids at Home, But Fail to Curb Juvenile Crime) he was murdered in his home in the afternoon by a robber who decided to kill him. Being out late had nothing to do with the crime, but it scared adults into enacting curfew laws. They were in fear that tragedies like this would reoccur. Adults want to put these restrictions on minors because of situation repeats that could occur. When Clinton was president he explained the purpose of them perfectly. “ “They’re designed to help people be better parents,” he said. “They help keep our children out of harm’s way. Maybe they don’t, but at least to let them know that it’s out there, that it’s a tool, that people have made it work, that children’s lives have been saved and their futures have been rescued.””( Purdum, Todd S) Creating the curfew laws, to the supporters of them, is pushing for a better community. The biggest argument the supporters of the curfew laws have is the fact that adults have ruled over children since the human race was created.

They justify curfews by “explaining that juveniles have never had the same rights as adults. For centuries, children have been subject to their parents control,”(The Effectiveness and Enforcement of Curfew Laws and Minors’ Rights) meaning that the curfew laws are just another enhancement in parental control. Parents’ rights are different than teenagers’ rights because “minors’ rights are not coextensive with the rights of adults because the state has a greater range of interests that justify the infringement of [such rights].”(The Effectiveness and Enforcement of Curfew Laws and Minors’ Rights) Parents have always had an authority over their children, enacting these laws is adding to the authority they already posses. You could picture the conversation of the parent and teenager: “Please, could I just stay out one more hour?”

“No you cannot, it is against the law.”

That is a very liable excuse you can’t argue against, it is the law. How convenient it would be for the parents, wouldn’t it? You have also probably heard the saying “Nothing good happens after midnight”. Why would teenagers want to stay out later than midnight? What is there to do after midnight?

Supporters have a valid argument, but the ones who oppose bring out an incredibly valid point. “Rita Sklar and the ACLU of Arkansas have argued that the arrests don’t justify the violation of constitutional rights. In implementing this curfew, Sklar says, “of course you find criminals, but you stop innocent people” — limiting their freedom of movement and in many cases employment possibilities, and penalizing all citizens just because a better strategy to deal with crime hasn’t yet been found.”(McKinney, James) While the parents’ argument is that staying out is against the law, the teenagers’ argument is their constitutional rights. “A common and recently successful challenge to curfew laws is their infringement on the First Amendment rights of minors, violating their freedom of expression, religion, and assembly—all of which have long been held to be fundamental rights.”(Proliferating Curfew Laws Keep Kids at Home, But Fail to Curb Juvenile Crime).

It is 21st century; times have changed since the curfews were first made. Not so long ago in the 70’s, teenagers did not own cell phones, they could not check up with their parents every hour to make sure they are okay. It was logical to have an earlier curfew. Nowadays more than 80 percent of teenagers own a cell phone. Therefore parents can know where their child is at all times and can reach them when it’s necessary. Another point against curfews in preventing crime is the majority of teenagers are “not seeking mischief but are simply trying to escape family arguments and other forms of abuse and chaos at home.”(Curfews and Common Sense) A minor roaming around the streets might look suspicious, so it is understandable why a cop might go up to them and question them but it would be unjust for a cop to give them a ticket just for being outside if they are not committing a crime. A large negative effect the curfew laws would have is “labeling all kids delinquents.”(Proliferating Curfew Laws Keep Kids at Home, But Fail to Curb Juvenile Crime) There was a study led in Vernon, Connecticut, looking for affects of the curfew imposed in the city.

“He examined 400 citations given to 16- and 17-year-olds in the city for violating curfew and found that in only one or two cases were the juveniles in question involved in any other crime or misdemeanor.”(The Trouble With Youth Curfews) That means out of 398 teens with citations of violating their curfew only one or two involved crime. The research has also shown around what time juvenile crimes have been in action. While authorities impose a curfew during school hours and at night, “juvenile crime peaks during unsupervised time in the late afternoon.” (Proliferating Curfew Laws Keep Kids at Home, But Fail to Curb Juvenile Crime) During the morning until school is over, teenagers are not supposed to be in public, a student could get a citation, for running late to school because they got sick and their parents were working so you needed to pick up medicine but the child would still get the citation because they were out in public when they should be in school.

It is in a teenager’s nature to rebel. There is really no reason to, but when you give them a set of rules to follow, they want to go against them and against the authority an adult has over them. It is that time in their life where they think they are grown up. Teenagers just have the mindset that rules are meant to be broken. “Policy experts and youth advocates warn that juvenile crime rises when funding for summer employment programs for youth are reduced, leaving them without supervision during the afternoon.”( Proliferating Curfew Laws Keep Kids at Home, But Fail to Curb Juvenile Crime) Just that statement is hinting towards a better solution than enacting curfew laws. It has been shown that more crimes are produced during the afternoon hours than the nighttime hours. So what is point to impose a law on something that is not often seen? “Most of the research has found that curfews are not effective in reducing crime or promoting public safety,”(The Trouble With Youth Curfews) therefore a better solution to prevent juvenile crime would be to fund in more extracurricular programs or summer camps and summer jobs for teenagers.

Save some “inefficient use of police time and energy,”(Curfews and Common Sense) let the police department worry about murderers and drug dealers rather than the curfew citations. In New York, “where the Police Department has decided that it can use its resources more efficiently by cracking down on truancy, the juvenile crime rate has dropped 30 percent in the last three years.”(Curfews and Common Sense) If it is a teenager committing a crime, the police will catch them just like they would catch an adult committing a crime. Why citations to teenagers out in the street at night doing nothing against the law just like adults going out doing nothing against the law? More adults commit crimes at night than teenagers do, why not adults a citation?

Curfews should be enacted as a household policy. Parents should be the ones telling the teenager what time they can come home and what time they can go out. Some teenagers are knowledgeable in knowing what is right and wrong while other teenagers need more discipline But it should all be on the parent responsible for the teenager’s actions, the law should not have a say in that aspect. The authorities have a right to arrest a teenager who is doing wrong, but they shouldn’t have a say to how late they can go out or when they are not allowed to be in public. “The sensible and lasting solutions to teenage crime are better schools, stronger families and well-financed, community-based recreational and remedial programs.”(Curfews and Common Sense)

The Effectiveness of Juvenile Curfews for Society. (2016, Mar 26). Retrieved from https://studymoose.com/the-effectiveness-of-juvenile-curfews-essay 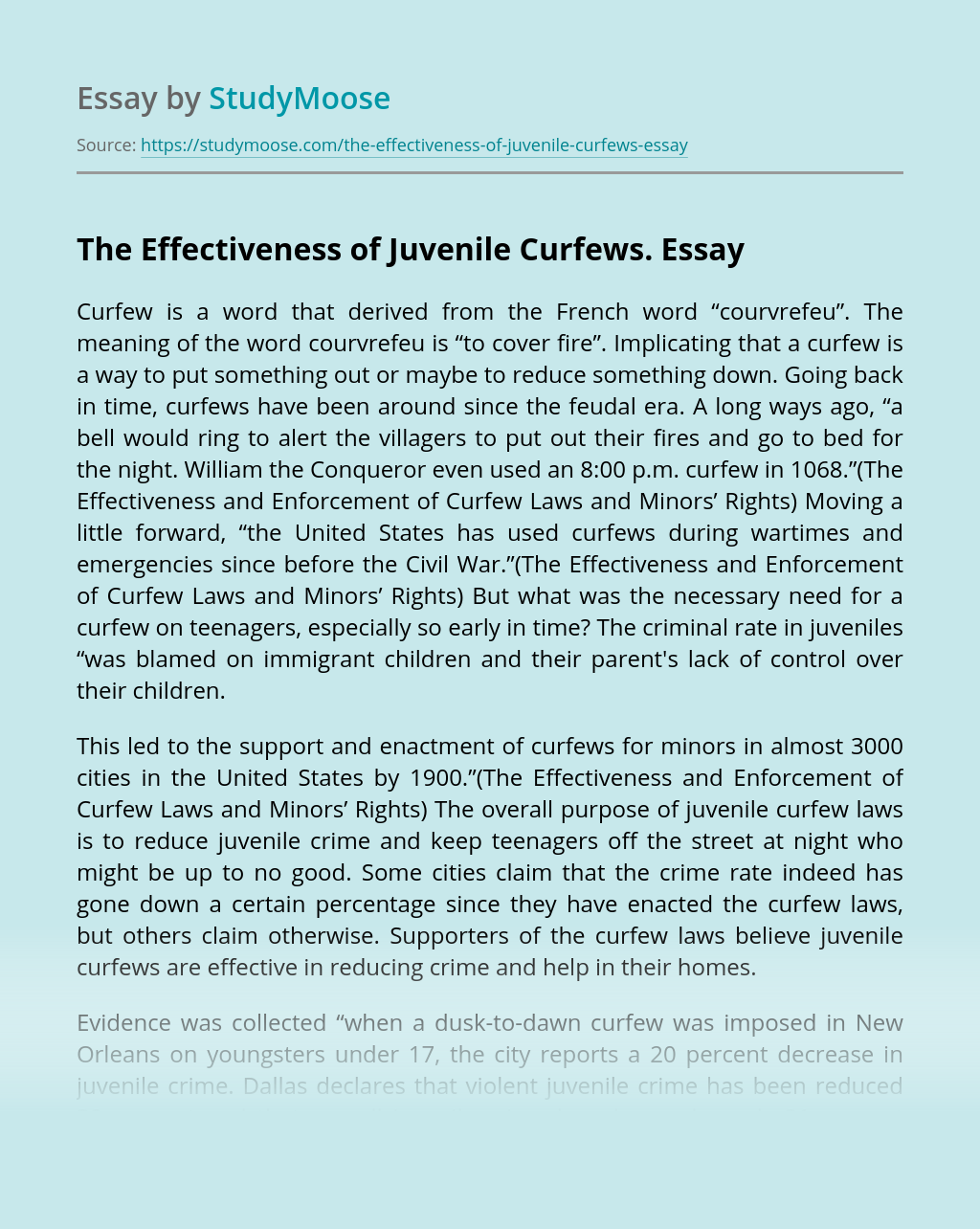